EXPECTATIONS: So I'm dicking around on the internet when I get a message from Sean "Keanu Grieves" Hanson about some new, bizarre VOD horror flick he found. Half an hour later, I'm watching it. How did that happen? Sean is probably some kind of witch.

REALITY: Woooooow. What a completely and delightfully bizarre film. 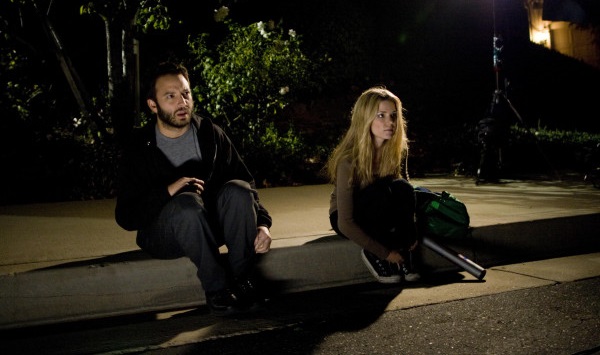 First dates are always the most awkward.

For some, part of the appeal of horror movies is how formulaic they are. You know what kind of catharsis you're in for when you walk in; you know there'll be a sweet and possibly misunderstood virginal girl pursued by a cold, bloodthirsty slasher. Chances are good some old guy will pop up in the first act to warn the potential victims away from their impending doom. The phones won't work, there'll be a jump scare that's really just something non-threatening, blah blah blah, you've seen this movie a hundred times. Mischief Night (the one directed by Travis Baker, not one of the other three recent films by the same name) has all the hallmarks of the slasher movie you've seen a hundred times, but it isn't. It's infinitely weirder.

Kaylie is a bored teenager babysitting the night before Halloween in a ritzy-yet-remote neighborhood. The prospective killer is a dude in a nondescript mask with a knife. Classic slasher movie, right? Well, sort of. Turns out nobody in this film is quite what you expect them to be. 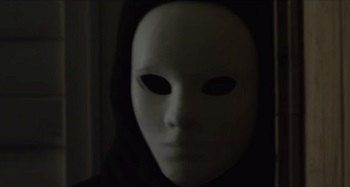 Night of the Jabbawockeez

Kaylie is particularly interesting as our innocent victim, because she's not sweet or innocent (though she does state, in what I found to be kind of a humorous exchange, that she is a virgin). Instead of being the "perfect victim" we usually expect in our horror movies, the first thing we see Kaylie do is spray some vandals with a hose and say, "Not so fast, motherfucker," and then lie on the phone to the parents of the baby she's watching. She watches a violent and disturbing scene in a horror movie passively, not upset in the slightest, and checks on the baby, cooing cheerfully "Aw, that's a good baby. Now shut the fuck up!" This all happens in the first fifteen minutes, to establish that our virginal victim doesn't quite fall into any norms we recognize.

The slasher gets the same treatment. We all know what we find scariest, right? It's the invincible unknown, something that's out to hurt us that we can't flee from or fight or overcome. It's why, in horror movies, we don't see the monster at first and why slashers wear masks. Murderous antagonists are always most frightening when they're faceless or unseen. But, not long after he's broken into the house, our slasher removes his mask, and transforms into a person. A warped, angry, confused person, who sees something he can relate to in the weird girl cussing on the floor.

Then the movie takes a weird (and fun!) left turn. The two seem to forge a sort of romantic connection, complete with a cute and prettily-filmed montage where their hands touch and she kisses a jack-o-lantern.

The great thing about a movie like this is that as soon as it becomes apparent that they're not following the script you've seen a million times - and this goes for films in any genre - then that means anything can happen. Is he gonna kill her? Are they gonna make out? What about that dude she has a crush on? And those shitty kids? Is Malcolm McDowell (yeah, he's in this movie) a slasher, too? I have no fucking idea! When the obvious tropes are subverted, most of the rulebook goes out the window, which adds some fresh and excellent tension to what you expected to be just another slasher flick. 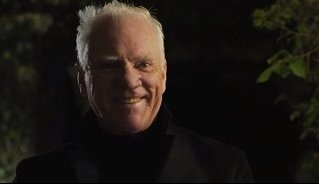 Oh, hi Malcolm.Horror movies are a fun time because there's a certain thrill to be had in things that are scary, and this movie explores that. These characters are motivated because of their attraction, benign or otherwise, to things that are bizarre and frightening. And, by throwing out the rulebook and changing up the events, it becomes thrilling for the audience, because now the plot is an unknown, too. The only issue is that it's so unfamiliar and bizarre at times that it gets downright weird and uncomfortable, which, for a movie named after a holiday where preteens egg houses, isn't necessarily a bad thing.This movie was clearly written by someone who loves cheesy horror flicks and all their accompanying features, as it displays a charming sort of self-awareness and affection for the content it's playing with. "Lemme guess, dead?" Kaylie mutters as she reaches for the landline. It's a shame so much of the dialogue is overwritten, as though the movie doesn't quite trust its audience to get it. Hey movie, if we're watching this, we've all seen these flicks before. You don't need to spell it out for us! Fortunately, those moments don't last long. The movie is tightly paced, and it's not long before we've moved on.

Seriously though, this movie is fucking weird.