Ian "ProfessorClumsy" Maddison doffs his cap to Paul Greengrass' Green Zone, and Ben "Slvbarek" Altenberg teams up with Robert "Macrame_God" Seeders to offer a less-than-sympathetic recap of Remember Me.

EXPECTATIONS: With the Bourne films, Paul Greengrass cemented his reputation as the king of frenetic, realistic action films that star Matt Damon. His latest contribution to this very specific genre looks like exactly the kind of hard-and-fast chase thriller that intelligent audiences have been craving.

REALITY: What can I say about Green Zone, other than that it's absolutely everything that you'd expect from it? And I do mean "everything you'd expect"; nothing more, nothing less. There are no surprises to be found here, but it's a hell of a ride all the same. 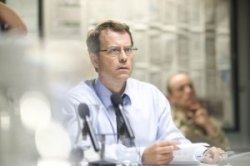 Wait... my character's name is Clark Poundstone?Chief Miller (Matt Damon) is on the hunt for weapons of mass destruction in Iraq, only to keep coming up blank. He starts to doubt the intelligence he's being given, so he tries to track down some of his own. With the help of local Iraqi patriot "Freddy" (Khalid Abdalla), he finds the safe house of General Al Rawi (Igal Naor) and is promptly cock-blocked by the mysterious Briggs (Jason Isaacs, complete with terrifying mustache). All of this leads back to the unfortunately named Clark Poundstone (Greg Kinnear) and his informant "Magellan." Miller can end this war, but only if he gets to Magellan before Briggs does.

The plot might seem contrived and maybe even complicated, but the film is so aggressively paced that you don't really get time to consider the intricacies of the convoluted conspiracy theory. The term "blink and you'll miss it" may be an overused cliché, but it's very literally true here. Nip out to the toilet and you'll return with no clue of what's going on. Whilst this may distract you from the fact you're watching a work of no great substance, beyond a very plot-driven action thriller, it also doesn't pander to its audience by insulting their intelligence. Missed a plot point? Too bad; you're on your own. This film doesn't repeat itself, and if you're not on the ball, the ending will probably be completely meaningless to you. This may put off your more casual film-goer, but intelligent and mature cineasts will eat it up.

Nope. No WMDs in this parking lot.

What Greengrass does best is capture the reality of his characters in the immediacy of decision making. This is exactly why United 93 was so superb. In a military setting, the opportunity for these situations is endless. We're given absolutely no back-story on these people, but we feel that we know their minds because we've seen them making split-second judgments at every turn. Damon in particular, forming the the ethical and emotional centre of the film, shines for much the same reason as he did in the Bourne films. We absolutely believe that this is a man who doesn't know what to expect around the next corner and relies on his training and his moral compass when shit gets heavy. Jason Isaacs is also impressive. In spite of the fact that he has very little dialogue, he gives the impression of being a frightening, unstoppable force of nature, especially as the film hurtles into its final act. 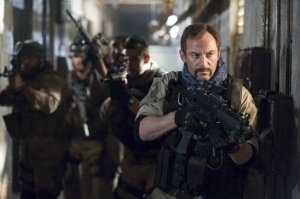 I wouldn't want to come face to face with an armed and mustached Jason Isaacs on a good day.However, there are a few low points. Amy Ryan plays journalist Lawrie Dayne, who appears several times throughout the film and does very little beyond telling the audience what they should be thinking and giving us someone recognisable with whom to witness the ending. Giving Dayne more interaction with the plot would have helped justify her presence while lending this character some much-needed emotional depth. Also, Brendan Gleeson (as Miller's clandestine guide Martin Brown) sometimes has a little difficulty with his American accent, but we can forgive that because he's Brendan Gleeson.

Green Zone climaxes with an extended chase along the streets and rooftops of Baghdad that is, to be quite frank, superb. The tension mounts constantly, and everything makes sense in a way that only a very carefully schemed military operation can, though things don't quite go according to plan. What makes this scene so interesting is that it really drives home Greengrass' point about soldiers at ground zero being reduced to simple targets. Be they labeled as hostile or friendly, it makes little difference. Sometimes you can't kill a hostile, and sometimes the friendlies aren't so friendly. Everybody has a job to do, you just have to make sure you do yours better.

Green Zone plays out like a serious, ground-level sister film to last year's In The Loop. It's another story of men capable of ending the war, only to choose the furtherment of their careers. The two films would make an interesting double feature, though I'm not sure how well Clark Poundstone would stand up to a bollocking from Malcolm Tucker.

MINORITY REPORT: I just didn't get it. Something about Iraq and Jason Bourne finding out why there was an Iraq and some guys get shot? I don't know. -David "Data Core Devil" del Vacote III