EXPECTATIONS: The Zero Theorem (apparently named as a Radiohead reference) also stars Christoph Waltz as a nosist Moby lookalike. The film springs from the mind of Terry Gilliam, the guy who made creepy Victorian art, Munchausen's Syndrome, and the country of Brazil cool again. One imagines the nihilist premise will serve as an apt conduit for Gilliam to express his frustration at his repeated failure to cross "Don Quixote film" off his bucket list.

REALITY: Gilliam's hardcore fans will lose their shit at the concept that a living entity has the biological capacity to say this, but The Zero Theorem shows a maturity that outshines even Brazil. CGI has afforded Gilliam the ability to tell more sophisticated, Kafkaesque stories, even on a smaller budget than Brazil (before inflation, no less). 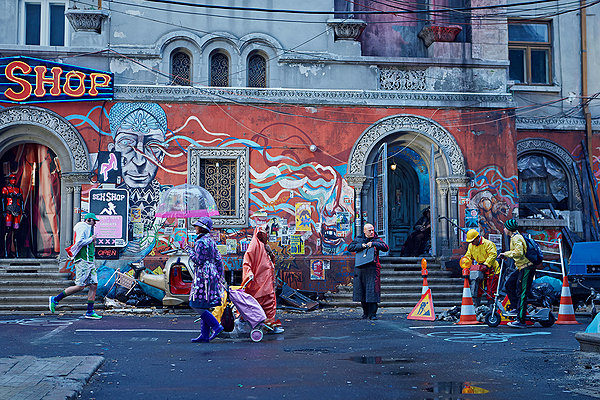 Pictured: Whimsy on a budget.

The film takes place in a world besieged on all sides by pressure to both have and spend more and more money. Ubiquitous ads literally follow consumers, exhorting them to feel more complete and connected through the act of spending money. Work has become life in a way that Bertrand Russell cautioned decades ago. Recreation and self-care have fallen under corporate control and become largely relegated to software, vouchsafed dilatorily by one's superiors.

Gilliam tells his story through the eyes of Qohen Leth (Waltz), a reclusive, nondescript employee mired in depression and convinced of his own moribundity. Qohen does practically nothing but work, although he prefers to do it in his home in an abandoned church, an anchorite of consumerism. Qohen's Sisyphean job appears to consist of manipulating voxels within abstract video games to "prove" the fundamentally-nihilist contradiction that zero equals 100% and therefore, matter equals nothingness. In his sedulous overwork in the service of a lie, perforce, Qohen finds his grip on reality and health spiraling.

Christoph Waltz anchors the film expertly, showing a calculated paucity of emotion until the floodgates open in the third act. Lucas Hedges plays a teenage factotum who becomes the voice of reason in a world where adults have inured themselves to tunnel-vision. Tilda Swinton plays a virtual shrink who resembles her character in Snowpiercer. Mélanie Thierry, David Thewlis, and so many others play adults imprisoned by their inanition, concealing their insecurities in lies and affectations.

As a mathematician myself, not since Pi or A Beautiful Mind have I felt so appreciated for my attenuating sanity. As a quondam student of nonstandard analysis-a relatively young branch of mathematics involving literally infinitesimal quantities-I also loved the attempt to prove or find meaning within the impossible.

The film lacks originality, but Gilliam knows. The entire project feels like a spiritual revision of Brazil. Qohen attempts to find contentment in virtual reality in a way that reminds one of Total Recall or Strange Days. To drive the fake-reality cliché home, at one point, a character even facetiously rips a monologue straight from The Matrix. 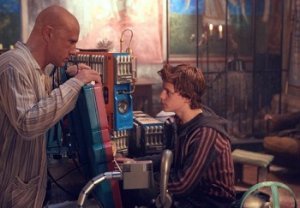 "Does yours have Spider Solitaire? Can I play?"However, Gilliam wields these tropes knowingly in the service of a relevant story. He characterizes modern adults as wage slaves who envision happiness as a faraway entity who will suddenly arrive one day to grant us everything we've ever wanted. As we wait, we've allowed monolithic private corporations to subsume every sphere of our lives, con us into believing that the path to happiness begins with brand loyalty and fealty, and addict us to emacity. Qohen's video-game-like job reminds us that so many of our hobbies involve the same myopic pursuit of arbitrary and inutile goals as our work tasks. We compromise our privacy and our off-time to meet our employers' exactions, we sustain ourselves with the most expedient and pernicious foods available, we doggedly pursue the ephemeral satisfaction of addiction, and we allow mental and physical illness to run roughshod over us. We delay seeking happiness because we can't look away from our high-definition Skinner boxes.

Gilliam saves most of his loathing for organized religion for the climax. Still, Gilliam never advocates a total absence of faith. He simply avers that churches employ the same manipulation of emotions for pecuniary gain as any other private organization. He never rejects spiritual acknowledgment or edification-quite the contrary-but he shows a clear contempt for those who would monetize it.

Now stop telling your kids to go out and play and go do it yourself! ... OK, watch this movie first. Then go take care of your work shit so you don't get fired. Then go shopping and go to church. Hell, just go out and play tomorrow. Your boss needs that report today.

MINORITY REPORT: It's comforting to know that some dreamers never lose their knack for it. Even if films like Tideland and Dr. Parnassus have their share of problems and don't make sense half the time, at least Terry Gilliam still has the drive to produce whatever wackadoo notions wind up falling out of his head. - Joseph "Jay Dub" Wade