Now You See Me

EXPECTATIONS: I've been excited for this film for quite a while, because it's basically "People I like watching: The Movie." From the marketing alone, I can tell a few things about Now You See Me:

A: It can basically coast on the likability of its cast.

B: There will be a big predictable plot twist at the end that may or may not make any sense.

C: B is unimportant because A exists.

This film seems to be setting itself up as sort of "Inception-lite," where it plays with all the deception and misdirection themes that Nolan does using only half the budget and minus the pseudo-intellectualism. I am totally okay with this. 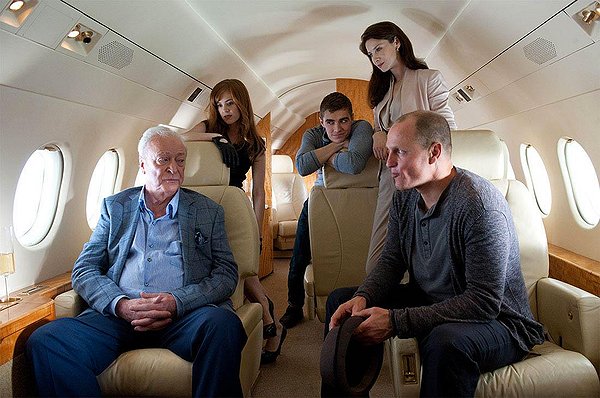 Look at all that A-list, would you?


REALITY: Is it possible to be disappointed with something that gives you pretty much exactly what you expect? It feels like there should be a word for that feeling, perhaps the Germans have one. In any case, that's what I took away from Now You See Me. I wanted a film that was as fun as it is forgettable, and I was somewhat infuriated when I got one. This is a good film, and it's one I enjoyed, but there are signs that it could have been a great one, and that makes it difficult to appreciate. You can't always get what you want, don't know what you've got 'til it's gone, all we are is dust in the wind, etc.

Now You See Me follows four struggling street magicians - J. Daniel Atlas (Jesse Eisenberg), Henley Reeves (Isla Fisher), Merritt McKinney (Woody Harrelson), and Jack Wilder (Dave Franco) - as they form The Four Horsemen, a Robin Hood magic show dedicated to stealing money and distributing it to their audience. They are followed by FBI agent Dylan Rhodes (Mark Ruffalo) and his begrudgingly added Interpol partner Alma Dray (Melanie Laurent, who brings the number of French women in Hollywood to two.) Meanwhile, famous magic-debunker Thaddeus Bradley (Morgan Freeman) trails them, attempting to decipher their tricks, and it wasn't until writing this paragraph that I realized how ridiculous all these character names are. Also, Michael Caine is there because he has a deal with his agent that he gets to appear in any films involving magic whatsoever, including the director's cut of Magic Mike. 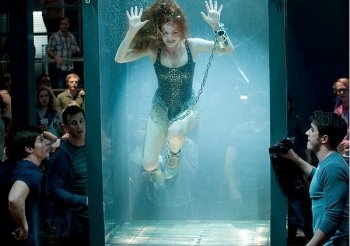 Now, this looks familiar.I've already detailed how much I planned on enjoying this film because of the cast, but the problem is that there are almost too many people you want to see here. There is so much heaviness in the plot that we don't get much development in any of the characters that we came to see. The chemistry between all of these people is there, but it's never given much chance to be explored. At one point, Jack asks "Hey, can we talk about my role in the show?" only to be ignored. This lampshades just enough for me to ask "That's a good question, Dave Franco. What is your purpose in this movie?"

There are hints of the banter and chemistry Eisenberg and Harrelson had in Zombieland, and smatterings of a romantic relationship, but the Horsemen themselves are really more of a plot device; a mass of unrealized potential from these stars. The real development and story comes from Ruffalo and Laurent, who spends this whole movie being ADORABLE. From a thematic point of view, this makes perfect sense, because it's more Dylan's story than it is the Horsemen's, but it still feels like a series of missed opportunities.

Now You See Me suffers from the limitations of its director, Louis Leterrier. An interesting concept and well-designed story are hampered by the cap on Leterrier's visual capabilities. This is particularly true during action sequences wherein Dave Franco kicks Ruffalo's ass with literal magic fireballs and a deck of cards. This sounds pretty awesome, and it could be, if there was any style or sense to the sequence. Leterrier films the action like he's still making The Transporter, not realizing that these are totally different styles. The reason we watch Jason Statham is to see how fast he goes, so it's okay for the camera to be frenetic. When you spend the entire film reminding us to look closely, it's cheating to not hold the camera still long enough for me to see anything.

I've detailed a lot of what this film does wrong, but that's because I actually enjoyed it, however counterintuitive that might sound. There are so many fun moments and good ideas here that the overall mediocre execution is more frustrating than with your average "okay" movie. You have two options here for seeing this film: You can enjoy it for the fun and entertaining bit of camp that it is, or you can pine for the flashes it shows of what it could have been. Either method is acceptable; you'll certainly have more fun with the former, but at a time when people are constantly proving that a fun and watchable movie can also be truly great cinema, it's almost a tragedy to do otherwise.