EXPECTATIONS: The last time an Indonesian film made a splash in the US, we got The Raid: Redemption, 2012's #1 punch-a-thon. Java Heat doesn't look like it's going to deliver that level of thrills, but what it may lack in exploding refrigerators, it'll almost certainly make up for with a preponderance of Mickey Rourke.

REALITY: The buddy-cop movie has been played out so many times at this point that you and I could probably write a pretty decent one in our sleep. It's a familiar formula that allows for a lot of narrative flexibility. Two mismatched cops, one from lifestyle A and the other from tax bracket B; a nefarious villain from Obscure European Country with political agenda X; vaguely ethnic thugs from central casting. They fight crime and make macho quips! Things explode! While Conor Allyn's Java Heat appears to have been written on autopilot, it's directed with enough visual flair to make the film a lot of dumb fun in spite of itself. 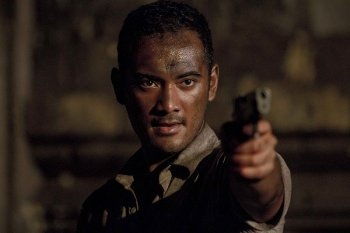 Is this what "Java Rules" means? Looks similar to "America Rules."After surviving a suicide bombing in Jakarta, undercover cop Jake (Twilight D-lister Kellan Lutz) is arrested for questioning. It seems he was the last person to see the Sultan's daughter (Atiqah Hasiholan) alive. To acquit himself of murder, he teams up with Officer Hashim (Ario Bayu), who believes the mastermind is still on the loose, and that the Sultana is still alive. Enter Malik (Mickey Rourke, for some reason), a European crime boss who is after the Sultana's million-dollar diamond necklace and has been staging suicide bombings to cover his tracks.

What's immediately apparent about Java Heat is that director Conor Allyn has a real affinity for his chosen location. When the film isn't stuck in the middle of a shootout, Allyn photographs the island of Java like he's producing a travelogue. We get a taste of the countryside, the local farming communities, and the nightlife. Allyn seems fascinated with all of it, and it adds a distinct sense of place to what could otherwise have been a fairly average-looking crime thriller.

The last thing this film wants to be, though, is average. Why bother cribbing the buddy-cop formula if you're just going to half-ass it, right? To combat this, Allyn's script is littered with all kinds of forced tough-talk. This dialogue might have been written sincerely, but the way the actors deliver these lines makes them all seem ridiculous. "Now we play by my rules," Hashim tells Jake, as he presses a boot into his face. "Java rules!"

For the most part, the action is handled nicely. There are several fistfights and shootouts that amount to fairly little, but for every one of those, we get Jake jousting on a dirtbike or Hashim throwing Jake over his shoulder for talking like an idiot. Java Heat's most interesting standoff takes place in Jake's apartment, as Jake fends off the Muslim Brotherhood, who is stuck between him and the Chinese mafia, who is in turn caught off-guard by the local police. It's a strange spiral of factions, and the film does a decent job of keeping everyone from blending together.

It's only in the film's final act that Java Heat's ramshackle style takes a nosedive. The climactic shootout involving Jake, Hashim and Malik takes place atop a Buddhist pyramid during a prayer festival. This would have been a fantastic place for a finale, as we see hundreds of extras lighting and releasing paper lanterns in the distance. But the shootout takes place in near-total darkness, like the lighting budget suddenly ran out and they were hell-bent on getting the thing done anyway. 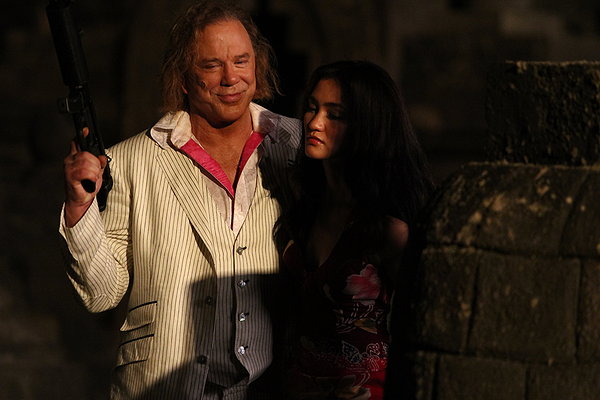 Mickey Rourke reprising his role from real life, where he plays a twisted version of actor Mickey Rourke.


Oddly, it's the Hollywood talent that is the film's real wild card. As a renegade cop with nothing to lose, Kellan Lutz has nothing on Mel Gibson. He barely even registers as a presence in the film to begin with, and he's the star of the movie! It's a good thing Ario Bayu shines as Jake's partner, or else this would be a buddy-cop film with no buddies to root for.

Then there's Mickey Rourke, who clearly wanted to try something different with this role. His character, Malik, is a jewel thief/crime lord who has allied himself with Muslim extremists. He also may or may not be a child molester. And if those weren't enough awful traits for one character, Rourke talks with a French accent and also a speech impediment. The result is a villain who sounds like a lion choking on a bag of marbles. It's hard to glean his character's intent from his line delivery, so the film has him speak half his lines in Indonesian. At least then there are subtitles.

This is a film in which Kellan Lutz accidentally shoots himself in the face with a shotgun and shrugs it off like nothing happened. It's a film in which Mickey Rourke fires an iPad-guided rocket launcher into a brothel, and all it seems to do is trigger the building's fire alarm. As by-the-book as Java Heat often is, it's the nuttier moments that really make it work. In no sane universe would I recommend Java Heat over a Lethal Weapon or End of Watch. It's not as polished as either of those, nor is it nearly as engrossing, but God bless it for trying.

MINORITY REPORT: Wait a minute... Is this yet another action film in 2013 that uses false-flag terrorism as a plot device; lining up after Iron Man 3 and Star Trek Into Darkness? Is this 2013's disabled immigrant? I can't wait to take a tally in December of just how many films have used this device. - Ian "Professor Clumsy" Maddison