EXPECTATIONS: It's hard to know what to think of 47 Ronin based only on its promotional material. There are all these stylised posters with various odd-looking characters standing in odd poses with odd particles floating around them and there are trailers that make it look like Keanu Reeves travels into video game Japan to kill all of its mythical creatures, completely ignoring the historical context from which it draws its title.

There aren't 47 in this image. Trust me, I counted them.


REALITY: 47 Ronin is a perfect example of a film that has no idea what it intends to be, much like a child asked what it wants to be when it grows up. As a six-year-old, I want to be a fantasy adventure, full of mysterious creatures and spectacular, 3-D visual effects. As a teenager, I am much more interested in being violent underdog story with that guy from The Matrix proving the worth of the white man in Japan, because teenagers are dumb. As an adult, I find myself wanting to be a serious historical epic about an important event in Japanese history. For some reason, 47 Ronin tries to be all three and as you might expect, it subsequently fails to do any of them.

When a band of samurai, working for Lord Asano (Min Tanaka) discover a young white boy wandering in the wilderness, they take him in and train him until he grows up to be Kai (Reeves), whose heritage nobody can seem to agree on, referring to him frequently as a demon or a half-breed. The real story, however, follows the leader of the samurai, Ôishi (Hiroyuki Sanada) as he witnesses his lord succumb to the spell of a witch (Rinko Kikuchi) so that her ridiculously smug master Lord Kira (Tadanobu Asano) can marry Asano's daughter Mika (Kô Shibasaki). Having spent a solid year locked in a pit, Ôishi emerges bent on revenge. Now masterless Ronin, he gathers his band of warriors together, including the outcast Kai, in order to exact vengeance upon Kira.

There's a strange, disparate element here in the form of Keanu Reeves' Kai. Billed as the lead, he does little beyond distract from Ôishi's narrative. In an attempt to balance their two stories, it becomes painfully clear that Kai, as a character, was shoehorned into the film as an afterthought. The powers that be decided, presumably, that audiences both American and international would not want to watch a cast of Japanese actors playing Japanese characters, even if they are all speaking English. Having already bombed in Japan, where the filmmakers had hoped it would pick up a lot of money, it has been proven that nobody in Japan wants to see Keanu Reeves stepping on their history. 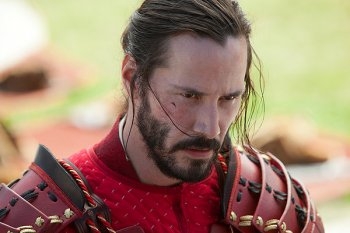 Something is very wrong here.But it's not just him trampling on history, it is the entirety of 47 Ronin's indecisive nature. Depending on which independent five-minute section you pick out, it is anyone's guess how this film feels about its subject matter. There are times when it seems to want to cover history with detailed reverence and then there are times when it wants to go the 300 route and frame everything through the symbolism of mythology. It seems confused as to whether it wants us to believe in demons and witches and dragons and weird antler monsters and ogres or if it wants us to look through a cinematic lens into Japanese history.

History aside, these issues deeply affect the film's structure. Sometimes it feels like everyone is in such a rush to get through the plot that they can't be bothered to stop and smell the roses. At other times, there is so much arbitrary rose-smelling that you just wish they'd get a bloody move on. We could do with spending more time early on focussing on our lead character, Ôishi, rather than watching Kai struggle with alienation, desperate for approval and falling in love with Mika. Oh, the struggles of the white man!

Before the film even gets going, we have to sit through an interminably long and dense prologue that throws characters, conflicts and dilemmas at us and takes approximately thirty minutes just to set up a simple, dull, damsel in distress/revenge scenario. It's a massive buildup to a terrible, lazy payoff. Once Ôishi emerges from the pit, we think we're in for a good action romp as we look into the eyes of Hiroyuki Sanada, hell bent on bloody vengeance. Finally, this thing is settling down into a rhythm, we think. Our hero is going to go and kick some smug villain arse. Well, no. Because 47 Ronin still hasn't decided if it wants to be Pirates of the Carribean, 300 or The Seven Samurai and keeps trying to juggle all three.

This is never clearer than in the third act where Kai's climactic battle with the unnamed witch stomps all over Ôishi's final act of vengeance again the smirking Kira, reducing it to a footnote while Keanu gets to take all the glory and rescue the princess. The result? Extreme dissatisfaction. The third act is robbed of any and all potential power.

Structural issues aside, there are yet more problems in 47 Ronin. You may have noticed already that the only two female characters are an evil, seductive witch and a damsel in distress. In fact, the main point of tension in the film is that the titular ronin must stop Kira before he marries Mika. Because, as we all know, once a woman is married she immediately dies.

It's a shame, because they assembled an excellent cast of Japanese stars to perform this rubbish. Hiroyuki Sanada carries the film wonderfully, or would if he were allowed to room to. Pacific Rim's Rinko Kikuchi is excellently hammy as a nameless, problematic character. Even Keanu Reeves does his best to elevate the slim material he is given, having apparently wandered into the wrong movie by mistake and being allowed to stick around. Nothing can save this mess of a film, though.

MINORITY REPORT: Let's add one more layer of weirdness onto this cake: Bill and Ted's phone booth crash lands in feudal Japan, killing Bill and wrecking the time machine. Ted is now alone and stranded in a strange land, forced to learn their customs and conquer their demons. There, tack that five-minute framing device onto your movie and see what happens. - Joseph "Jay Dub" Wade