In the wake of Iron Man 3 going wide in the US, it's no surprise that this week sees the release of a film nobody cares about and a film nobody has heard of. The former is The Big Wedding, which leaves Martin R. "Vargo" Schneider cold. The latter is Upstream Color, the latest from Primer director Shane Carruth, and Joseph "Jay Dub" Wade insists we should all see it at once.

EXPECTATIONS: Who asked for this? That's not a rhetorical question, I'm genuinely curious. Someone at some point decided there was an audience for this film, and I'm unsure how or why. If you're really interested in watching wacky crazy misunderstanding-fueled scenarios during which Robert De Niro phones it in, Katherine Heigl sets feminism back several decades, and the white mass of uninterestingness known as Amanda Seyfried occupies screen space, aren't there dozens of existing films to choose from? Why did we need another? Where does it end? 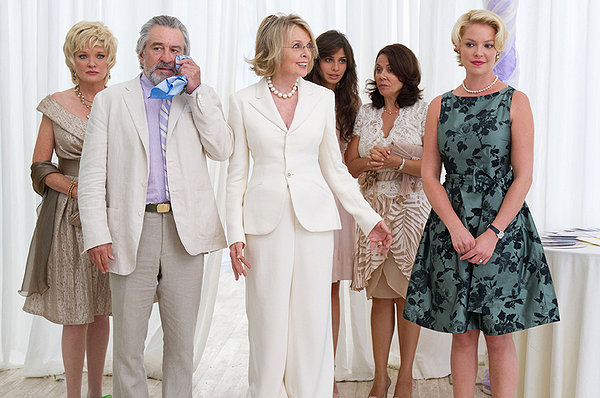 Look at all the money we spent on this movie. Bet you want to see this more than Iron Man 3 now, don't you?


Our story focuses around a family, and if you didn't realize that, don't worry, the film begins and ends with a family tree. Not a figure of speech, I mean a literal oak tree with each family member's name on it. The family has gathered at its old home for the wedding of its adopted Colombian son Alejandro (Ben Barnes) to rich white girl Missy (Amanda Seyfried). This occasion reunites parents Don (De Niro) and Ellie (Diane Keaton), who have been divorced for many years while Don continued a relationship with Ellie's best friend Bebe (Sarandon). Meanwhile, their daughter Lyla (Heigl) arrives, failing to hide both the contempt she has for her family and the fact that her own marriage is failing because of... something? Also, their other son Jared (Topher Grace) has decided that now is a good time to lose his virginity at age 29. Jared appears to be an OB-GYN, meaning that he had to go to school for several years and study vaginas, without ever actually touching one himself. This is a pretty funny concept, but the film never acknowledges it.

Anyway, the main conflict is this: Alejandro's biological mother Madonna (Patricia Rae) is coming to the wedding, and she doesn't know that Don and Ellie are divorced. And apparently this is a conflict because she's *gasp* Catholic, which somehow means the behaviors of people on the other side of the world affect her so greatly that it would somehow hurt her relationship with her son... who she hasn't seen in years. Of course this means Don and Ellie have to pretend they're married for three days while Bebe hides from the wedding of the man she helped raise. Also, Robin Williams gets to play a sassy hypocritical Catholic priest again, and none of you did anything to stop this from happening. For shame. 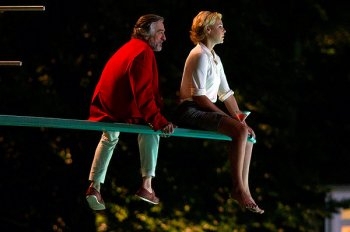 Frankly, this is just dangerous and irresponsible behaviour and I'll have no part in it.Let's get this out of the way right now: Katherine Heigl made me laugh. In fact, the movie would actually be a lot better if it focused primarily on Heigl. The three older leads banding together to help their daughter would actually be a sweet and interesting story, and there wouldn't have to be any zany antics. You could still use the wedding as a framing device, and there would be no need to have Topher Grace around, as is the case with pretty much everything.

Tone-wise, this film is all over the place. It gets some laughs when it pokes fun at casually racist rich white people, but then I remember that this is a film that filled the role "Colombian male lead" with a handsome tanned white guy. This is a film that's very much on its high horse about racial and class politics, yet it pretends the concept of a married bisexual woman is so outrageous that it must be a joke.

Plus, there's basically no way anyone can relate to this twisted group of paycheck actors. Lyla is a lawyer, Jared's a doctor, no one really knows what Alejandro does but he went to Harvard and speaks five languages, Don is a renowned sculptor, Bebe runs a successful organic catering business, Ellie apparently travels around the world, they all live in this beautiful lakefront home, and oh god I just hate all of them so much. I realize the idea here is for Middle America to watch this and say "Look, the rich people have problems just like us," but they don't. Hey moviegoers, you may be seeing this movie to escape from worrying about paying rent on time, but look, Katherine Heigl and her husband had a fight! 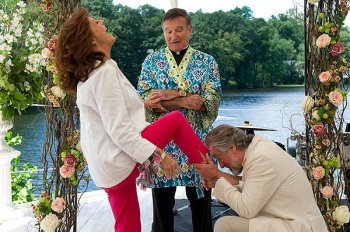 This is probably hilarious. It looks hilarious. I think this counts as a zany antic.I mentioned before that this film is uncomfortably crass, which is less of a shock when you realize writer/director Justin Zackham's only other director credit is this thing. I have no problem with dirty jokes, and some of the movies's only good lines involve De Niro saying perverted things to everyone and not giving a damn. (Actually, that may not have been acting.)


However, it doesn't feel right here because quite frankly, none of these people seem like they should be having sex. There's no sense of when to and when not to be raunchy. In the middle of what is supposed to be a sweet and romantic story, one character is off to the side getting a hand job. It's like they just drop a sexual reference in every once in awhile to keep the audience from being bored.

Also, for a film that's basically all about sex, this movie has some weird attitudes about it. Beside the weird treatment of bisexuals, there's also Ellie keeping Jared from having sex with a girl who wants him, Alejandro's (biological) sister, by telling her that he needs to prove himself by being romantic and giving her flowers and reading her poetry before she gets into bed with him. She does this in the name of, get this, women's lib. She's actively keeping her adult son from being sexually gratified for no apparent reason other than what Zackham thinks is FEMINISM. I figure Diane Keaton of all people should know better.

It's weird for a film that's essentially about a poly relationship to be casting judgment on anyone else's sex life. Also, if Alejandro had any characterization beyond "spineless pretty-boy," all of these problems would be solved. This should have been two hours of people telling others to mind their own friggin business. It would have been much better than the forced attempts at drama between Heigl and De Niro, both of whom clearly have no interest in even being on-screen by this point.


This is the very definition of a "paycheck" movie, and the fact that there are a few good gags and interesting ideas here and there actually makes it worse. The entire film is hollow and empty, which is what happens with projects that no one cares about. It's not particularly horrendous, but it's not worth the time it took to make or the time it takes to watch. These people are paid to act interested in this story; if they're not going to do that, neither should you.

MINORITY REPORT: At first, I was really cynical about these wedding movies rolling out every year like clockwork. Then I realized the genius of it all. If someone offered me a ridiculous paycheck to hang out with a bunch of my famous friends, eat some cake, drink some wine, and then drunkenly stumble through a fake wedding, I'd probably sign up for that every year 'til I died too. - Joseph "Jay Dub" Wade