The Influence Of Fantasy/Sci-Fi Literature

The connection between J.R.R. Tolkien's Lord Of The Rings books and Led Zeppelin is one of rock's most well-established curiosities, but to this very day it manages to surprise longtime fans of the band. Robert Plant was such a fan of Tolkien's work that he named his dog Strider and worked many elements of the series into the band's song titles and lyrics. 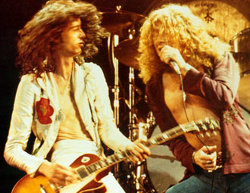 For example, "Ramble On" directly references Gollum and Mordor. "Misty Mountain Hop" is about Bilbo's destination in The Hobbit. "The Battle Of Evermore" deals with Eowyn leaving Aragorn to join the departing armies of Rohan, and refers to the Ringwraiths by name. Although it doesn't contain any specific references, "Stairway To Heaven" has been linked to Middle Earth because of its passage about smoke rings (which Gandalf was known for blowing); "looking to the west" as a possible allusion to sailing across the Sundering Sea, which is almost presented as passing into Heaven; and the lady (possibly Galadriel) surrounded by gold (Lothlorien tree leaves were described as golden).

While the last example is rather shaky, there is no doubt that Led Zeppelin loved them some hobbits. I wanted to know if they were the only musical act to be influenced to such a degree by genre fiction, so I did some research. As it turns out, there are more fellow nerds in the industry than anyone could have imagined.

While many irresponsible Web sites have already released their Best of 2010 lists, thereby shafting the many important artists who release relevant material in December, Something Awful will hold its year-end coverage until 2011. There won't be a music column next week, but something great will be in its place. Happy New Year!