LucasArts was once a great developer and publisher of video games. Now it has been garroted by a wild-eyed Disney, who paused to adjust its grip on a length of piano wire and announce the studio's closure with a perfect example of heartless business speak:

"After evaluating our position in the games market, we've decided to shift LucasArts from an internal development to a licensing model, minimizing the company's risk while achieving a broader portfolio of quality Star Wars games. As a result of this change, we've had layoffs across the organization. We are incredibly appreciative and proud of the talented teams who have been developing our new titles."

In its heyday LucasArts was as prolific as it was creative, spoiling players with games like Maniac Mansion, TIE Fighter, Monkey Island, Sam & Max, Outlaws, Full Throttle, The Dig, and Grim Fandango. They had the talent and freedom to take on any project that appealed to them, which is an exceptionally rare position. They seemed unstoppable. Then they just sort of, well, stopped.

Over the last decade or so LucasArts seemed unsure about this whole "making video games" thing. Projects were started then scuttled for no discernible reason. The people in charge stopped letting creative people do their jobs, commanding them to nap until someone shook them awake and forced them to create an obligatory Star Wars cash-in.

Their resources would have allowed them to take some real risks and become the industry leaders they once were. That didn't happen. They could have released all of their classics on Steam or Good Old Games and drowned in a sea of money. Didn't happen. Why? Who knows! The little dude in the LucasArts logo, as it turned out, was either shrugging or waving both hands toward an unknowable point in the future when they would work on something worthwhile.

Of all the games that LucasArts gave up on over the last ten years, did any have the potential to turn things around? 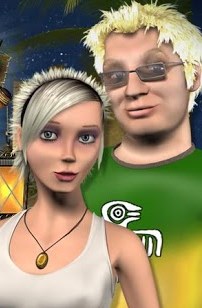 Zed & Toots was pitched to the gaming press as "Minecraft meets Cool Dog", though LucasArts did not clarify what Cool Dog was. Some of us have speculated that the game's creators might have been referring to 80s Bud Light mascot Spuds McKenzie, which was a cool dog. Others believed that Cool Dog was Poochie from The Simpsons, or possibly some dog from a European comic book that displayed cool characteristics.

Either way, the gameplay revolved around placing objects to make a game world very cool. Instead of the square blocks and hearts found in Minecraft, Zed & Toots featured sunglasses and potato chips.

The project was shut down when a LucasArts accountant ran the math and discovered that Minecraft had already raked in far more money than it should have, leaving absolutely no money in the economy for other games of any sort for the foreseeable future. 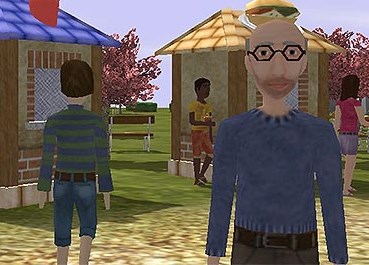 In this open world adventure game, players would have stepped into the shoes of Milton Passionhandles, a middle-aged agent who had planted himself deep undercover in the seedy underworld of burger stand communes. The campaign was shaping up to be a tense thrill ride fraught with intrigue and mystery. Which burger can you trust? Why does everyone wear capri pants? Are you in too deep? Where can a fella take a nap around here?

A key feature was the revolutionary Burger Interrogation system, which allowed Milton to pose different questions to suspects depending upon the type of burger that the player selected (medium, rare, Taco Bell Doritos flavored). This system was particularly exciting because there seemed to be no correlation between the player's intent and Milton's line of questioning.

Unfortunately the lead designer snagged his shirt on a computer monitor at work, trapping himself for all of eternity. The game was canned on the very same day that the designer's desk was sealed off with bricks to prevent his plaintive whimpering from impeding the work of his colleagues. 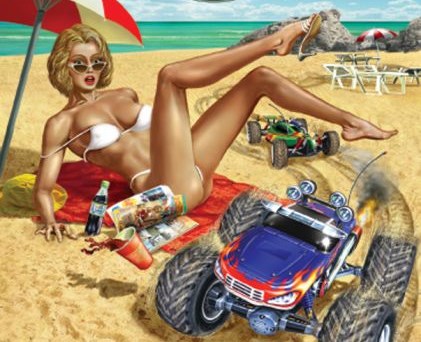 RC Assholes wasn't a game about racing, but a competition to see which remote controlled car could be the biggest dick. Spray sand on women with your tires then hover nearby and leer at them. Wait outside a department store to scuff someone's brand new shoes. Drive through a young family's house and honk your horn just as their toddler says his first word.

LucasArts shut down production of the game when they took a closer look at the above art and realized what was going on with that lady's pinky.

Perhaps the most mysterious of LucasArts' unreleased games, Barbarian Whatever was never fully explained. The only public information comes from a LucasArts executive who briefly spoke about the project during an investor call:

"You fight barbarians or maybe you're a barbarian. I guess there's dragons and hell bats. Maybe some skull guys. We don't have any concept artists or designers working on the game. We've got some guy that's just learning how to use Poser, though, and he says that he's seen a barbarian painted on the side of a bus. So look forward to that."

Rumor has it that Barbarian Whatever was never officially cancelled, but that it was eventually reworked into the hotly anticipated Uncharted clone known as Star Wars 1313.