I Wish it Really Was The Last Song

EXPECTATIONS: With names like Nicolas Sparks and Miley Cyrus attached to The Last Song, you'll understand if my expectations for this movie are somewhere approaching zero. So I guess there's really nowhere for this movie to go but up. If I expect nothing out of this movie, I can only be pleasantly surprised. Yeah, that sounds reasonable to me.

REALITY: Judging from the trailers that ran before the movie, I figured there was about a 50/50 chance that The Last Song would either be a computer-animated kids movie or a non-computer-animated chick flick. I can't say I was disappointed when it turned out to be the latter, but it was fun to dream for a few minutes before Dr. Forrester started up this week's experiment.

Miley Cyrus stars as a troubled teenager named Miley Cyrus who, along with her younger brother, is forced to spend a miserable summer in beautiful coastal Georgia with her artistic, estranged father (Greg Kinnear). Right off the bat, Nicolas Sparks' screenplay tugs at the heartstrings, because nobody deserves to have Miley Cyrus dumped off on them, least of all Greg Kinnear. The film settles into a groove as irritable ol' Miley grows increasingly attached to the town, particularly a local jackass named Will (Liam Hemsworth), a creature engineered in a focus group to appeal to every teenage girl on the planet. The rest of the film can easily be described as "drama happening". Miley gets upset over something, mopes for ten minutes, and then someone apologizes. Repeat for 107 minutes. 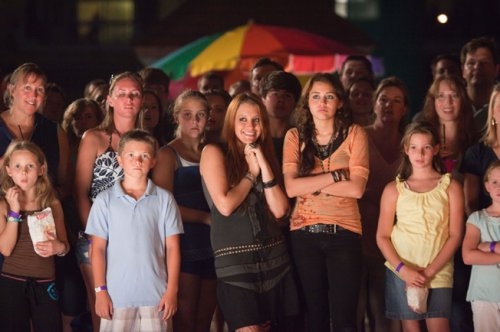 There's aways that one person at every party who's having way too much fun.

There are several problems with The Last Song, not the least of which is Nicolas Sparks himself. I can't fault the film for existing, because it's kinda what Sparks does. His books fill the million-dollar niche of mindless airport reading and bonfire kindling, and that's cool, really. Still, that doesn't excuse things like horrible dialogue and worse character building. Cyrus' character is the worst example of this. When we first meet her in the film, she's excessively grumpy. Apparently something bad happened to her several years earlier, but the film is so concerned with showing us how troubled she is that we never actually learn why. At one point, she snaps at her father over nothing and yells, "I don't want to be here! Isn't that obvious? Do you not get that?" Yes, you clearly don't want to be in this movie, but no, we don't get that. We need more of a reason than "waaah..."

It's weird, here's yet another chick flick in which the main character simply wants nothing to do with movie they're in. It's like the words became self-aware on the page and decided to resist the will of Nicolas Sparks at every turn. Listen, Miley, I don't want to be here any more than you do, so the least you could do is meet me halfway. I paid eight dollars to see this piece of crap, so all I ask is that you put eight bucks worth of effort into your own damn movie. Fine, sing a song or two; just act like you care for more than 5 minutes at a time. 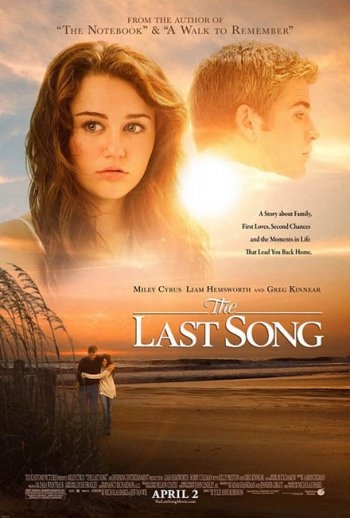 The now infamous "rocket head" poster.The entire first act is your typical meet-cute crap where everyone meets everyone else and slowly but surely tells each other, "Oh, I've heard about you...," only this time around, nobody ever bothers telling us what, exactly, those reputations are. It's like a James Bond movie with neither plot nor villain. What is Miley's malfunction? What's her dad's deep, dark secret? Does he have a deep, dark secret? Why exactly is Will so goddamn perfect? These are questions that everyone in the movie already knows the answers to, but it only decides to casually mention them to the audience to get the plot moving again once everything grinds to a halt.

In fact, the whole movie feels like that. We're constantly forced to watch a deeply emotional story while the characters hold us stupid viewers at arm's length. It's insanely difficult to tell when these characters are being sincere and when they're just being facetious with each other. It's equally hard deciphering whether these characters think or feel anything beyond what actually comes out of their mouths. "You're lying," or "I don't trust you," or "I love you" are all things we should be able to infer just as much from Miley's actions as from her words. Unfortunately, neither she nor Liam Hemsworth ever figure out how to do that, leaving Greg Kinnear as the only cast member capable of properly emoting, and because the movie's not about him, nobody gives a shit if he emotes or not.

Finally, like all movies based on Nicolas Sparks' brain leakage, The Last Song tries to lob an emotional curve ball with the inevitable downer ending. The ending itself isn't so much the problem; that's actually the one element the filmmakers manage to get right. The problem is that the downer ending appears to come as a result of Miley's newfound happiness. She's finally found something to be happy about : she's got the perfect robot guy, she lives at the beach, life is fun, hooray Miley! And then suddenly *BAM*, a 30-minute pity party to close out the movie.

The only lesson gleaned from The Last Song is that the main characters in Nicolas Sparks stories have somehow angered the Gods. I don't know if they accidentally ate the Gods' favorite cow or drew a magic marker mustache on a painting of Nicolas Sparks, but whatever they did, the Gods are clearly out to get these characters. For whatever reason, the Gods are vengeful and angry, and nothing will stop them from ruining Miley Cyrus' perfect summer. If our heroes and heroines do achieve ultimate happiness, terrible things will come to those they love as a consequence. There are really only two solutions to this problem: Either we kill the chick flick gods, or we keep Sparks' characters miserable human beings forever. Clearly, one is easier than the other. Maybe we should give Perseus a call?

MINORITY REPORT: You just don't get it, do you!? Dads can't understand me, because I'm a unique snowflake. The only one who understands me is... him. Not the guy in this movie, I'm talking about the Twilight guy. -a teenage girl