EXPECTATIONS: I can't think of a more unholy union of trying-way-too-hard-ness than Jason Sudeikis and Jennifer Aniston. Despite this, We're The Millers seems like it has a lot more things going for it than against it, at least on paper. It's written by Bob Fisher and Steve Faber, creators of the strangely decent Wedding Crashers, and directed by Rawson Marshall Thurber, who once turned a movie about adults playing dodgeball into something fun and silly, instead of creepy and sad like actual adults playing dodgeball. That, plus the fact that Emma Roberts is great in everything she does, has me pretty excited about this film, despite that stupid kid singing "Waterfalls" during every damn commercial break.

REALITY: We're The Millers ends with a gag reel right before the credits roll, kinda like they're saying "Sorry the movie you just watched wasn't funny. Have some stuff that is! See how much fun the cast is having? Look at all the amusing stuff you COULD have been watching for the past two hours instead!" 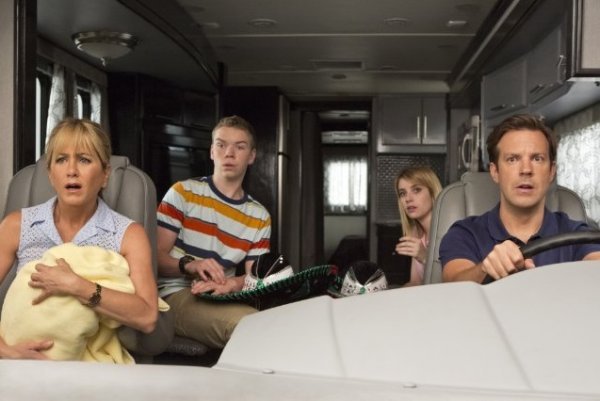 
Our story follows David Clark (Jason Sudeikis), a low-level pot dealer who is forced into smuggling an RV full of marijuana over the Mexican border in order to settle a debt owed to his boss (Ed Helms). Figuring that he has less chance of being searched at the border as part of a traveling family than by himself, David enlists the help of Kenny (Will Poulter), a dorky latchkey kid; Casey (Emma Roberts), a homeless runaway; and Rose (Jennifer Aniston), his stripper neighbor, to pretend to be his family. Thus the titular Millers are created. Do wacky hijinks ensue? Not really, not so much. No.

The humor in We're The Millers ranges from "pathetically predictable" to "desperately trying to be offensive." This movie wants so bad to shock that it even creates its own strawmen in the form of of Don and Edie Fitzgerald (Nick Offerman and Kathryn Hahn), a pair of white-bread suburban family travelers who serve as foils to the fake-Miller clan, and also exist as a Deus-Ex-Swansona for the antics that are supposedly happening. These are oh-gee-shuckey-darn Midwesterners, pure to the point that they are surprised to hear someone say the word "penis." These people don't actually exist, and if they do, they sure as hell aren't watching We're The Millers. This movie is not good enough to be so smug. 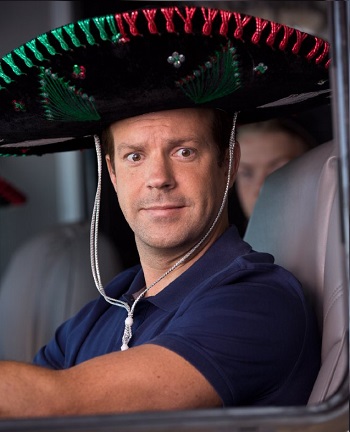 
Okay, the spider is new, somewhat. It also means that IMDb gives us the bit of trivia that the makeup team had to craft a prosthetic model of Will Poulter's genitalia, which I'm sure is something he wants on his resume. My point here is that the movie wants to go for shock value but it's honestly barely above PG-13 gibberish. There's no satisfaction in half-assed humor. I'm not a fan of forced offensiveness, but I like it even less when there's no commitment to it.

Are there bright spots? Some. Roberts gets a few good lines in, and even though all the characters live on Miller Street, we're spared the seemingly inevitable moment where Kenny looks at the street sign and says "I know! We'll be the Maples!" or some stupid thing like that. So, you know, small victories.


Aniston's not bad in this film, nor is Sudeikis. There's just nothing particularly notable about either of them. As a result, this whole film suffers from a lack of charm. Perhaps apropos of its subject matter, We're The Millers is like that one couple that really, really wants you and your girlfriend to come over and play board games sometime, it'll be a hoot. There are probably good intentions there, but they try so hard that the result is just weird and off-putting and honey don't you dare answer that door you know it's Jennifer and Jason again just pretend we're not home.

MINORITY REPORT: Sometimes, I see a trailer for a movie and conveniently dump all knowledge of its existence. This is one of those times. So when Marty said he was reviewing We're The Millers, I imagined this as a quasi-sequel to Did You Hear About the Morgans? Looks like the film as I imagined it and the film as it exists aren't too disconnected, qualitatively speaking. -Sean "Keanu Grieves" Hanson

While I would almost certainly never see Millers or Morgans of my own volition, I would be there opening day for a Marvel-style cross-continuity mega-movie that involves all of the families from these recent garbage comedies teaming up for two hours of unfunny 3D shenanigans. -Joseph "Jay Dub" Wade