EXPECTATIONS: I will be disappointed if I don't get at least three musical montages, two whip pans and one intertitle written in a groovy retro font. Oh, who am I kidding? I can't get excited about this film. I can't even finish the trailer without counting the similarities to Boogie Nights and the collected works of Martin Scorsese.

REALITY: There's this bullshit tendency in Hollywood to celebrate sexual freedom in the first act of a film like Lovelace before bitch-slapping its practitioners by the final crawl. Lovelace -- like its predecessors, Wonderland and Auto Focus -- capitalizes on the opportunity to tell an incredibly bleak and probably true story to remind us of the wages of sin. That's fine. I don't know enough about the inner workings of porn to declare whether it's a means of exploitation and degradation or the ultimate expression of sexual freedom. The fundamental flaw of these films (and, as much as it pains me to admit it, Boogie Nights, the film that gave the '70s sex biopic its juice) is that they can't tell you either. 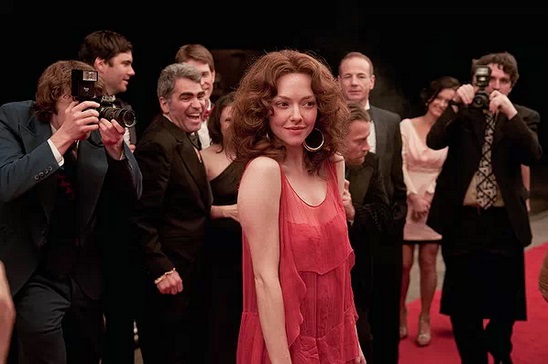 The man on the right has never held a camera in his life.

I have no doubt that Lovelace was gang-raped, beaten and raped some more, and that she felt an enormous amount of pressure to appease Traynor by appearing in Deep Throat to help him settle his debts. After all, she passed a polygraph while telling her version of events. But given that a lot of the events in question happened behind closed doors between inebriated people, some of whom are now dead, and no one thought to document these events until a decade after, a 90-minute biopic is hardly an appropriate venue to sort this out. If anything, Lovelace is incontrovertible evidence that it's nigh-impossible to weave conflicting oral histories (no pun intended) into a compelling narrative with three acts and a denouement; life rarely unfolds according to dramatic structure. 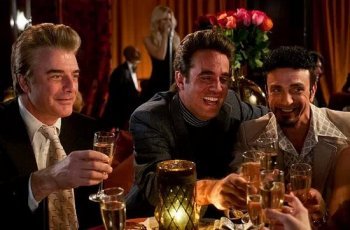 male_gaze.jpgDirectors Rob Epstein and Jeffrey Friedman are accomplished documentarians, but they're new-ish to narrative features, and they're working from a screenplay by another relative newcomer, playwright Andy Bellin. Together, the three of them aren't equipped to make the film that Lovelace should be, if it should be one at all.


Although I wasn't alive in the 1970s, the cinematography, costumes, makeup, hairstyles and set design all feel right, which is to say there's at least one righteous black dude with an afro and amber-tinted sunglasses that hide most of his cheeks. Elsewhere, Seyfried and Sarsgaard do as much as they can with what little they're given, but solid acting, loving devotion to period detail and a star-studded supporting cast (Sharon Stone, James Franco, Hank Azaria) aren't enough to save a bad biopic from itself.

A successful biopic should inspire the audience to consider the meaning of its subject's life. To do that, the filmmaker must pare that life down to its essence, which means reducing thousands of hours lived to 90 short minutes -- roughly 45 when you consider that each half of the film presents the same events from an incompatible perspective. Epstein and Friedman yield most of the film to the production and impact of Deep Throat, with plot points at the beginning and end hanging on like rogue couch stuffing.


What deeper understanding of Lovelace's life are we supposed to glean here? That she was a naive victim of Traynor's charms? That, as Seyfried-as-Lovelace states in a recreation of a Donahue interview, her Deep Throat days defined her life? "I'm a mother and a wife," she tells us, but that's meaningless in a film that all but ignores the time she spent as a mother, a wife, an anti-pornography crusader and an advocate for victims of domestic violence. Instead, it focuses on her contribution to a cultural flashpoint that arose from a haze of factors: relaxed sexual morals, rampant drug use among pornographers, criminals in their milieu ... and, apparently, domestic and sexual assault.