EXPECTATIONS: Laika Studios has been batting 1000 when it comes to movies. Sure they've only made two high profile films, but what films they were! Coraline is a superb adaptation of Neil Gaiman's dark fairy tale, and ParaNorman was hands down one of the best films of 2012. It's hard not to get excited for the next story to be told by these stop motion animation geniuses, and it has lovable trolls! Marketable Lovable Trolls!

REALITY: Being disappointed sucks. Especially when you have high hopes for something. From the announcement of the film, to the first teaser trailer, this film seemed like it would fire on all cylinders, capture my imagination, and just generally be all around great. Suffice it to say I was sadly disappointed that the film did not manage to capture my heart, and had to work pretty hard to capture my attention. After two films I love dearly to this day, I expected more out of Laika and their animators. Perhaps I am being too harsh, as there are lots of lovely things to say about The BoxTrolls. It has the same loving care and detail that Coraline and ParaNorman did, it has wonderfully fun sequences that thrill and entertain, but at the heart of this movie, there is a very weak story. 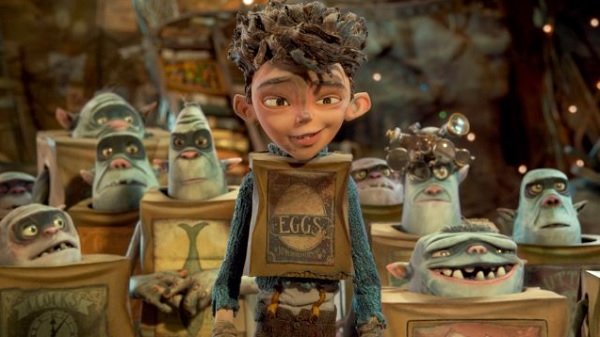 The BoxTrolls tried for years to beat the Dreamworks Face out of him, but to no avail.

The basic story follows a group of trolls who wear boxes. They are raising a human boy as one of their own. The boy, named Eggs after the word written on his box, grows up into a fine Box Troll, but strange things are afoot. A mysterious man named Archibald Snatcher has promised to round up and destroy all Box Trolls in exchange for joining the ranks of the city's elite. Eggs must join forces with the daughter of one of the town's leaders to expose Snatcher's plan and save his strange family. That sounds all rather nifty when summed up, but the film pads itself out with odd subplots that tie together, but in a fairly haphazard manner.

The big problem with this film is that it's titular characters are hardly featured. The story is mostly about Eggs discovering he is actually a boy and not a box troll, and his odd friendship with Winnifred Portly-Rind, daughter of the town leader. The Box Trolls take an instant back seat as soon as Eggs' story begins to take off, and it is a huge problem as the Box Trolls are without a doubt the film's most interesting element. They are resourceful creatures who build and tinker, and I found them very entertaining, but they are sidetracked in their own movie. I suppose this wouldn't matter if Eggs was an interesting protagonist, but unlike Coraline or Norman, Eggs is decidedly boring. 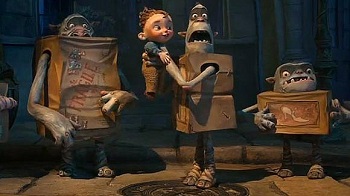 Everyone loves an ugly baby.Another issue is the film's villain, Archibald Snatcher (the unrecognizable voice of Ben Kingsley), as his story and motivation really kind of stink. He wants to join the town's elite to eat rare cheeses (to which he is very allergic) and is using the Box Trolls and their extermination as his way in. He's also hideous to look at, with some of the most disgusting character design I've seen in an animated film. There is also a subplot that will be sure to anger some and confuse others. Snatcher pretends to be a woman through large portions of the film to help seed a false tale of the Box Trolls and to spy on the elite members of society he wishes to join. It's bizarre and more than a little offensive at times. Tumblr is already seething about this, and after seeing it, I cannot blame them. It's tasteless and serves little purpose but to poke fun at a man in a dress, which is really not needed in a 2014 children's film.

Having said my piece about the large portions of the film I disliked, I will say that the animation is stellar, as is to be expected. Fluid and mostly gorgeous, it really does feel like Laika are on top of their game as animators and craftsman. Despite some ugly character designs, the characters of the trolls, Eggs and Winifred are all well crafted, and fit in line with the characters Laika has created in their previous films. Another thing the film has is a wonderful voice cast. Isaac Hempstead Wright of Game of Thrones fame does what he can as Eggs, working with an underwritten role. Elle Fanning is charming and sweet as Winifred, and the stand outs are Nick Frost and Richard Ayoade as Snatcher's henchmen who just want to be the good guys. Laika manages to capture great talent for both their animation and their voices, and I hope that trend continues wherever they head next. It's always a treat to see what art they can come up with, even if it's a little undercooked.

I suspect kids will enjoy the film, because it's got cute, unintelligible monsters who are very marketable. Universal Studios already have costumed characters in their parks, so I imagine we'll be seeing toys and games for a while now. It's just a shame that they couldn't have hunkered down and really worked out a better script for this film. I hear it has very little to do with the book it's based on, so I can't see why they just didn't go whole hog and craft something with the same heart and emotion as their first two films. Children's entertainment deserves more care and attention that Hollywood wants to give it, and Laika usually delivers on that front, but in this case, it's kind of a swing and a miss.

MINORITY REPORT: Subplots that don't go anywhere? Characters that look ugly as sin? These all sound like my complaints about Tusk last week. Are you sure Kevin Smith didn't have a hand in this? -Joseph "Jay Dub" Wade