Hector and the Search for Happiness

EXPECTATIONS: I don't really know what this is, but that title sounds like the kind of thing that would make me angry. I suppose it could be subversive and ironic, but I somehow doubt that Peter Chelsom, a director whose last film was literally The Hannah Montana Movie has that sort of thing in him. "Well, at least this movie has Simon Pegg!" they told me at the office. "That should be reason to see it." No, no not really it isn't. Have you actually looked at Simon Pegg's IMDB page? Outside of Edgar Wright collaborations and the two action franchises where he provides comic relief, it's all quite terrible. The man has basically made his living hoping that you'll ignore two-thirds of his work, and that approach is surprisingly effective for the general population that aren't forced into theaters every week. 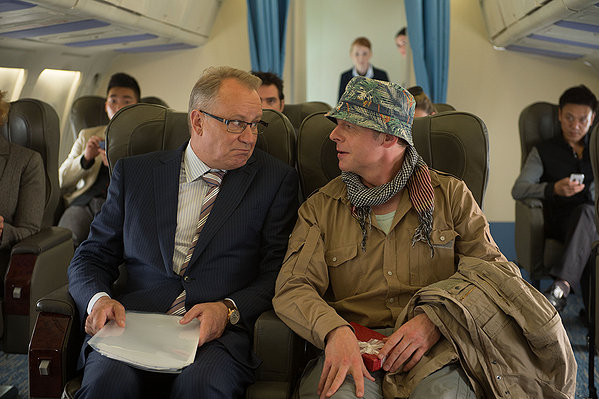 Really, what could go wrong?

REALITY: Four years ago, during my second week at Current Releases, I wrote a scathing takedown of the Julia Roberts film Eat Pray Love that quickly became one of the most popular pieces in CR history, and I kind of wish it hadn't. It's not a piece I'm particularly proud of having written. I think there's a few good points in it, but overall I spend way too much time judging the audience instead of the film, I automatically assume that the film is going to be beaten by The Expendables and Scott Pilgrim (like an idiot who doesn't understand how the box office works), and I clearly don't do any research into anything I'm saying. I also sound like a shallow misogynistic douchnozzle for almost the entire review. For this reason I should really be thanking Hector and the Search for Happiness, because it gives me the opportunity to apologize for what I wrote in that article, and I can also observe that this movie concept still sucks regardless of the protagonist's gender.

Note that I said I should be thanking it, but I won't, because I still had to go through the pain of watching the damn thing. Hector (Pegg) is a psychiatrist who suddenly realizes that his life is stuck in a rut, because he's informed of this by a woman who believes she is psychic. because of this, he gets it in his mind to travel the world for "research" into what makes people truly happy. During his travels he befriends businessmen both legit (Stellan Skarsgård) and less-than-legit (Jean Reno), volunteers his services as an actual medical doctor, and reunites with an old love (Toni Colette) that isn't super-excited to see him. All the while, Hector leaves his extremely patient current girlfriend Clara (Rosamund Pike) at home wondering if her boyfriend will ever come back and if he will still want to be with her then. Really, this film should be called Hector and the Search for Your Own Happiness at the Expense of Everyone Around You, You Stupid Dick. 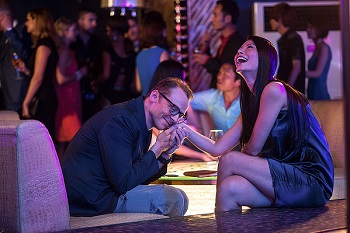 I am so tired of these types of films, wherein a well-off white person is able to just abandon their responsibilities and "find themselves" by travelling the world. Even when it's done well, like in The Secret Life of Walter Mitty, it's still pandering and frustrating to see it as an audience member. For a lot of people, spending the eight bucks to go to the movies alone is considered a luxury, and it's outright insulting to have films like this look you in the eye and say "Money can't buy happiness." Oh really? Because it certainly seems to be doing exactly that for Hector! Even more irritating is that the film goes out of its way to point out that Hector hasn't changed his patient rates in years, so how the hell does he even have the cash laying around to go to three continents in two months?

Worse than that, these films always try to push how culturally enlightened their protagonist becomes, but proceed to give such white-washed views of other cultures. According to Hector, Africa is populated entirely by smiling dancers and drummers, or by militia thugs. This effectively means that the Africa which Hector visits is actually more culturally tone-deaf than the one visited by Adam Sandler and Drew Barrymore. In another scene, Hector is shocked to learn that monks in a Himalayan monastery have the ability to use Skype, even though in the previous scene, we just watched him help them install the satellite dish. The film even takes a hard-left into Eli Roth territory momentarily when Hector is kidnapped by African drug-runners. It's often shown that Hector's relatively posh position makes him naive and oblivious to dangerous situations, and for a brief moment I wondered if the film would do something of note with that, but of course its that same oblivious affability which gets him out of the situation. It's a good thing, too, the film came dangerously close to falling into something interesting. 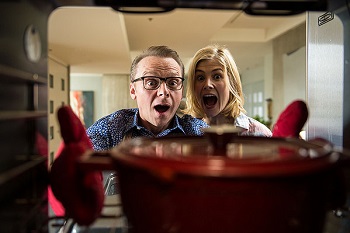 AAAGH! HAPPY!Beyond this, the whole film seems disjointed and unexplained. References are made constantly to a traumatic event in Hector's childhood, something about a dog, something about a plane. It's never really told what, and I really don't care, but it also makes for a technically jarring film. On more than one occasion, one of the film's multiple framing devices make it appear as though Hector's story is being told in a child's imagination, similar to The Lego Movie. No reasoning or explanation is given for this, we just have to assume that it's an inner-child thing and roll with it. I'm assuming there are multiple scenes on the editing room floor that make sense of this, but since they would just make this tortuous film last longer, I say leave them there.

Simon Pegg's natural charm and the likability of the cast in general sooth the pain a little, but this is the kind of cloying garbage you can only take so much of. Every character talks in monologues, dispensing fortune-cookie wisdom like "Avoiding unhappiness is not the path to happiness." One imagines that if Hector really had to travel around the world to learn that, he must have been a pretty lousy psychiatrist to begin with. After about the second or third flashback through things we've already seen so Hector can reflect on his life, it all just sort of runs together. Surprise surprise, Hector, the secret to happiness was right in front of you all along! That's all well and good for Hector, but speaking as someone sitting in the audience, there's been nothing in front of me but misery and pain for the past two hours.

MINORITY REPORT: Ah yes, rich white people finding enlightenment via traveling the world. According to Leap Year, Letters to Juliet, and several other films, they all find love the same way. Good thing that sort of globetrotting isn't at all nauseating and boring to watch for two hours. -Ashley "TwistedLadder" Herald