EXPECTATIONS: I know nothing about this film. I guess it's supposed to be like a family drama? Oh look, Bill Hader.

REALITY: Movies often present us with an idealized, fantastical, or caricaturized version of reality. When ridiculous or patently unrealistic things happen, most of us shrug. "Of course the guy got the girl in the end, it's a movie." "Look, there they go, riding into the sunset." "Ooh, the girl's gonna escape the slasher, right?" If ever you suspected there's a reason that events in movies don't often reflect reality as it actually is, you're right: at least in part, it's because reality is actually depressing as fuck. But! That's not necessarily a bad thing.

The movie opens with Milo (Bill Hader) slashing his wrists in a bathtub. His suicide attempt causes a phone call to be made to his estranged sister, Maggie (Kristen Wiig). The phone call is timely; Maggie is contemplating a handful of pills when the phone rings. She flies across the country to see her brother in the hospital, inviting him to stay with her for a while. He goes with her back to New York to meet her husband (Luke Wilson) and to maybe begin resolving some of the issues they each have in their respective lives. 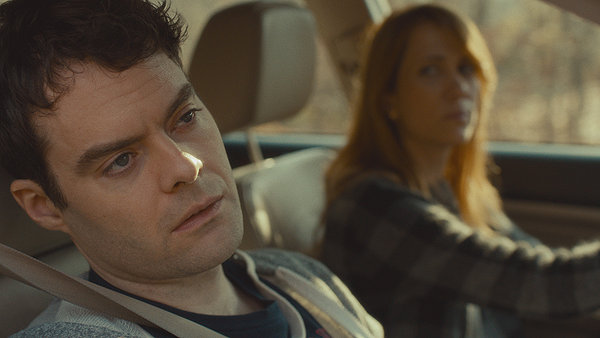 Funny people really are the most miserable people.

The main theme of this film is suicide, and suicidal ideation. One character has committed suicide before the film even begins; others make attempts or are shown very definitely contemplating it. This isn't even going into the laundry list of other relationship-straining and heartrending things that happen in the film. Infidelity. Deceit. Stress surrounding unwanted pregnancy. References to statutory rape. Ready to slit your wrists yet? Because the characters sure are!

But this is where the movie shines, actually, in that this portrayal is realistic. Terrible things are happening; relationships are broken, reforged, and broken again. People are crying, thinking about dying. Family members are estranged. Good people get hurt. Things like this happen in real life, but there's a lot of bright points. Sometimes the twins act silly to cheer each other up, sometimes they just take comfort in each other's company; that happens in real life, too. Hader and Wiig are both largely known for their comedy, and while this film gives them plenty of opportunities to show off their capacities for drama, the comedy is present and very effective.

What really spurs the film forward - and without it, the film would otherwise have very little movement - is the chemistry between Hader and Wiig. Starting out the movie as estranged, by the end we see they've really come into each other's lives again, and for the better. Their lives aren't everything they want, everything's not fixed in a neat little bow, but they've started to make healthier decisions by embracing their relationship and the support they can give each other as people who know one another in a unique way.

Very striking in this film is the way these moments are shot. Mostly the camera gives us plenty of space to see what's going on, and keeps its distance, but every time something significant happens for a character, with how they're feeling, growing, or the relationships they're nurturing, then and only then does the camera show us just their face. When the camera zooms in on their face, it is in that moment that something for that character has changed. It's pretty subtle and just the right amount of emphasis for a movie that deals in how the small things stem from and contribute to the big things. 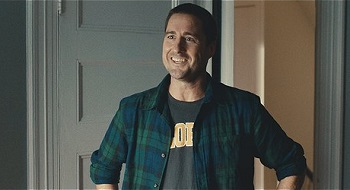 "It's a beautiful day to finally fucking kill myself!"Particularly poignant is the fact that suicide in films is often portrayed as some big dramatic moment from people who JUST CAN'T TAKE IT ANYMORE; this erases and stigmatizes people who actually deal with suicidal ideation. Suicide is something attempted by people who have run out of coping mechanisms, who feel so low that they feel they're never going to feel better. The Skeleton Twins is unique in that it takes people going through that experience and makes them relatable even for audience members who may have little to no practical understanding of what they're going through.

The thing that makes a film like this so potent is that we can see in it glimmers of our own lives and the lives of people we know. People are messy. We get in our own way, and trip over our own desires, and just generally screw up. Sometimes we don't learn from our mistakes. That's okay. The important thing is to keep trying, and as the film ends on a hopeful note exemplifying the now re-forged relationship between twins, the movie knows that and wants you to know it, too.

"Jeez, Ash, way to write a stark review," you may say. Yes, well, I just don't have it in me to make jokes about the suicide movie. It's a really good movie, and it's really worth your time, but you're going to want to eat your feelings afterwards.