EXPECTATIONS: At best, Let's Be Cops is a victim of terrible timing. At worst, it's tone-deaf, pro-police propaganda where the cops are always right, especially when they're abusing their power. Regardless, it's going to be hard to laugh at a cop comedy while police are murdering black teenagers and gassing protesters in Missouri, applying fatal chokeholds in NYC, tasing people to death in San Bernadino or just flat-out shooting people.

REALITY: As the audience laughed all around me at the 7:35 p.m. screening of Let's Be Cops, I turned to stare at my visibly uncomfortable friend beside me. Had they given up hours ago and resorted to watching The Naked Gun on their iPhones, or were they actually laughing at this movie? If the response was the latter, I fear for our children. 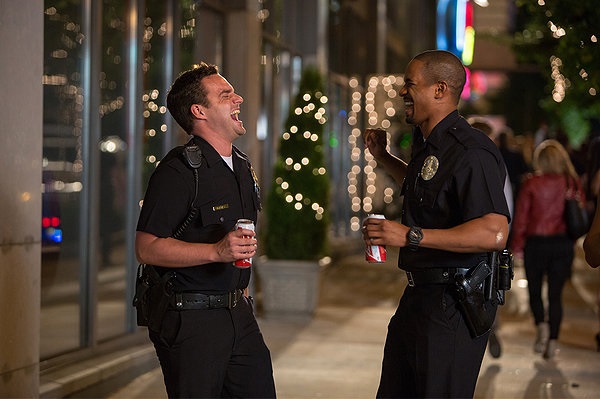 This is so illegal!

Thirty-year-old roommates and best friends Ryan O'Malley (Jake Johnson) and Justin Miller (Damon Wayans Jr.) are pathetic losers with pathetic loser lives. O'Malley bullies children in his seemingly ample spare time, while Miller works for a video game company. After attending what appears to be their nine-year Perdue University reunion dressed as cops, they are accosted by some sluts, realize that abusing power is fun, and decide to pretend to be cops so that they can harass children and steal drugs. They stumble on a gun-smuggling ring, and there's some police corruption, but it's mostly just them slap-fighting each other and No-Homo'ing everything.

I bring up the sluts because they're a huge part of this film. There is not one decent portrayal of women in this movie. Not. One. Every woman is either a hot bachelorette slut, a dirty fat skank or the Generic Romantic Interest (Nina Dobrev), all of whom want nothing more in life than to bang a man in uniform. During a stakeout into the B-Story, psycho-slut Annie (Natasha Leggero) is so head-over-heels turned on by cops that she literally goes head over heels, showing Our Heroes the breathable cotton panel of her surprisingly generic underpants while heavy-breathing about all the men in uniform that she's sexed up. 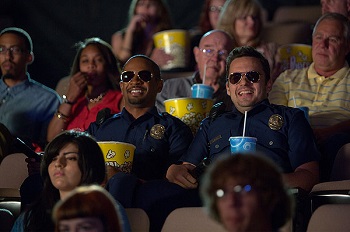 This is still illegal!Disturbingly, one of the biggest laughs in the movie comes from Our Heroes getting called to a domestic disturbance at a sorority house, where two Sassy HosTM are fightin' over a man. During this fight, Miller punches a black woman in the face, and the women in the audience just roared. Later, when Miller decides to be more "manly," he goes back to his office and threatens to beat everyone up if they don't listen to a new pitch for his game. He looks the Token Lady Person in the eye and says, "I will beat the shit out of you, and I've hit women before." Of course, he gets the game, because aggression = manliness = success.

O'Malley, meanwhile, continues to be the charmless asshole that he was at the start of the film, learning that being a police officer not only gives him purpose in his otherwise miserable existence, but also gives him a legitimate outlet for being an aggressive, violent douchebag. Roughing up minorities and drug addicts, harassing women, this has become his dream, and the audience is supposed to be happy that his dream of doing these terrible things with absolute authority comes true.

This is the core message of Let's Be Cops (other than that women are sluts): Might Makes Right. Miller rises to the top position at his company solely by threatening to murder a roomful of people. O'Malley is handed a badge and a gun despite committing more than a few felonies. Even at the end, when he officially becomes an Officer of the Law, he celebrates this by driving on a crowded sidewalk, endangering the lives of the people he is entrusted with a badge and a gun to protect. 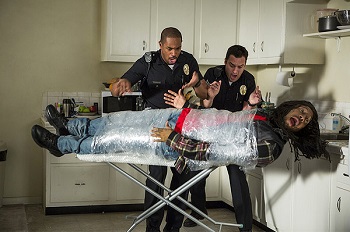 There is nothing more illegal than this!Police brutality and abuse of power is big news right now, but films like Let's Be Cops try to convince us that being a cop is the ultimate honor and their brutality and petty corruption is what keeps us safe from Bad Guys With Foreign Accents. This isn't like The Shield or The Wire, where cops make difficult - but often corrupt - choices to forward their personal ideals of justice while we, as the audience, feel torn between our primal desire for righteousness and our understanding that what they're doing is utterly vile. No, Let's Be Cops expects the audience to celebrate O'Malley and Miller's corruption and abuses of power because Cops are Heroes.

There was potential for satire here. There was even potential for O'Malley to learn about responsibility and honor and for Miller to learn confidence, not blind bullying. But nope, instead the directors decided to back a script that doesn't understand how jokes are told or how characters are developed, crammed two talentless hacks into the leads and filled the rest with clichés. I'm pretty sure Let's Be Cops causes irreparable brain damage, which can be the only excuse for why everyone else in the theater seemed to love it.

MINORITY REPORT: I don't want to be the minority reporting anything in any discussion of Let's Be Cops or anything that has anything to do with cops, so I'm just going to put my hands in the air and back away slowly. -Sean "Keanu Grieves" Hanson