EXPECTATIONS: Like most people, I hated The Devil Inside - hated it in such a way that, even now, I can't recall anything about the movie except my intense disinterest in what was happening on screen. Unfortunately, that movie was incredibly profitable and co-writer/director William Brent Bell is back with Wer, a movie that marries the found-footage format with werewolves, just as The Devil Inside did with demonic possession. Uh-oh.

REALITY: If you ever need proof that werewolves are the most neglected monsters in the annals of cinema, here it is: According to IMDb, there are 269 werewolf movies, the most popular of which are a Harry Potter sequel, a Twilight sequel and The Mortal Instrument: City of Bones. Anchorman 2: The Legend Continues rounds out the top five and I have no idea why. Conversely, there are 889 vampire movies. With few exceptions, we've reduced vampires to effete monuments to ennui, repression and bureaucracy. They have their secret societies and crystal chalices and ways to satisfy their urges without actually hurting people. They are immortal and bored, bound by rules that only seem more arbitrary and convoluted as time wears on. I defy most of you to explain, without looking it up, why garlic hurts them and they cast no reflection. 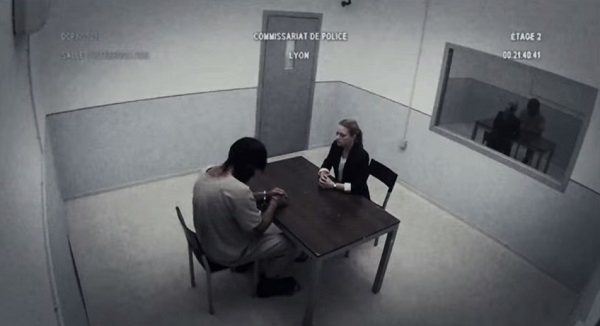 Werewolves also have no problem being videotaped.

Meanwhile, werewolves remain uncomplicated. They are fearsome, savage creatures of violence. If vampires play upon our fears of immigrants and promiscuity, werewolves play upon nothing more than our fear of ourselves and what we might do if we snap. As creature effects have improved while vampires have only gotten goofier, werewolves are inherently more cinematic. The last half of Wer is exciting because it was built on these postulates. And when Wer missteps - and it missteps hard - it's because Bell can't resist complicating this legend with a particularly offensive brand of bullshit pseudoscience, but we'll get to that. Warts and all, Wer is a good argument for more werewolf movies to supplant the weird hold vampires have on genre cinema.

Wer begins with footage of an American family camping in the French wilderness, where some monster (the movie is careful to avoid using the word "werewolf") emerges from the treeline to snatch the husband and child. Only the wife is left alive - barely - to tell the tale. Based on her description of the monster, French policeman Klaus Pistor (Sebastian Roché) arrests the very tall, very awkward, very hairy Talan Gwynek (Brian Scott O'Connor). Human rights lawyer Kate Moore (A.J. Cook) steps in to defend him, aided by an investigator, Eric (Vik Sahay), and Gavin (Simon Quarterman), a guy who specializes in animal attacks - coincidentally, he's also Kate's old flame. Cue love triangle. 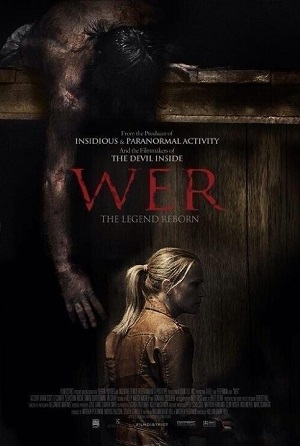 Can you help me down? I really hate the top bunk.The first half of Wer, in which Kate builds a defense for Talan, is fascinating for its investigation of the French legal system, even if it's probably bullshit. Because Klaus treats Talan like Hannibal Lecter, muzzle and all, we're sympathetic to his plight, even if we're 90% sure he will transform into a monster before the final reel. That is the crux of the werewolf narrative's appeal. We care about him even after he accidentally scratches Gavin during a scuffle with police. Then, pseudoscience comes a-knockin' as Gavin, who is kind of a doctor, theorizes that Talan suffers from a rare form of porphyria. Talan tests positive for porphyria. He freaks out, kills a room full of doctors and heads for the hills when intermittent photic stimulation triggers his lycanthropy. Eric, who is not a doctor at all, further theorizes that, because the moon affects tides and our bodies are 60% water, porphyria patients turn into superhuman lunatics during a full moon, which ancient cultures mistook for werewolves. Kate, who is also not a doctor, agrees that this plausible. But there's also a transformation scene. I hope you were able to follow that train of logic because I sure as shit wasn't. If it is a medical condition that's confused for lycanthropy... well, porphyria patients can't actually transform into something else... I mean, what the fuck?

But because good, let alone decent, werewolf movies are so rare, Wer won me over with a last half that plays out like The Raid 3: Lycanthropy. Granted, it's not quite as fluid or operatic as The Raid, and I'm not usually one to recommend violence for violence's sake, but Wer is unparalleled in its devotion to werewolf carnage. Thanks to the magic of After Effects 12.1, Talan claws his way through entire SWAT teams - frequently smashing their heads into gory messes or literally tearing them in half - and it's all rather satisfying, a melange of scares and thrills and gross-out moments that culminates in a Lethal Weapon-esque pièce de résistance, and I'll be damned if I'm going to spoil that. But have you ever wondered how a werewolf might take down a helicopter? William Brent Bell has. The answer is his redemption.

MINORITY REPORT: Anchorman 2 is a werewolf movie, because Harrison Ford's character turns into a werewolf for a couple minutes. I had to consult the internet on this, because my mind shook that movie off like a fucking Etch-a-Sketch. - Joseph "Jay Dub" Wade