EXPECTATIONS: Here's everything I know about this movie: the source material ends up on banned books lists frequently; Jeff Bridges has apparently been wanting to adapt this book to film for quite some time; the director has directed a lot of decent-to-good projects; and the trailer looks like shit. The reason this film was made likely has to do with the recent slew of Young Adult adaptations (The Hunger Games, Divergent, etc.) and while The Giver is technically a YA dystopia, it is tonally very different. Here's hoping they don't fuck it up!

REALITY: YA novels occupy an interesting space in terms of content. The target audience is old enough to start to explore some challenging and complex themes, but not old enough that we mustn't protect their poor, innocent minds from the dangers and sins of our filthy world. When these works get adapted to the silver screen, this incredibly dumb approach follows, usually with mixed results. 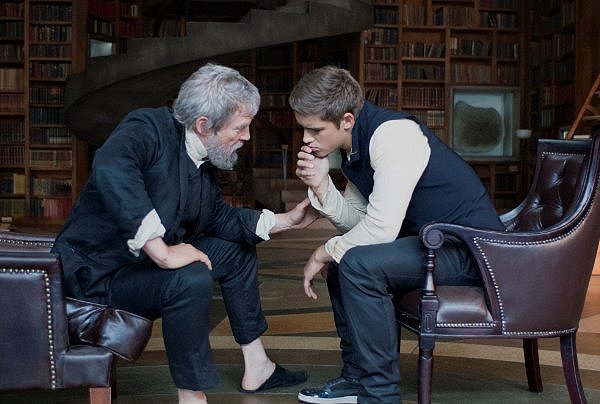 Listen very carefully. I'm going to "give" you something.

The Giver follows a young man named Jonas (Brenton Thwaites), who is selected by the Elderpeoples of his community and their leader in a fright wig (Meryl Streep) to become the new Receiver of memories, the only person in their entire little society who will have any knowledge of what life was like before their idyllic yet passionless community was established. He receives these memories from the previous Receiver, a man who supposes out loud that he is now the Giver (Jeff Bridges). Once Jonas starts experiencing emotions and things like "actual fun" and "real suffering" for the first time in his 18 or so years of life, he decides to try to upset the status quo so that everyone, including his not-girlfriend Fiona, can embrace the full range of human emotion.

The people of Jonas' society not only operate by a strict set of rules, they also take morning injections to inhibit their emotions and anything that might inspire them; they can't even see the world in color. As Jonas is exposed to the dizzying madness of color, music, love, joy, and sorrow, he is irrevocably changed, no longer content to merely survive, but determined to share these experiences with everyone. The question the film poses, then, is this: which is better, a life of guaranteed survival and contentment, sacrificing real joy to avoid all conflict and the pain of real loss, or a fuller life, where a person has the potential to experience all aspects of the human condition? The film gives us an answer, too (surprise: it's the latter). 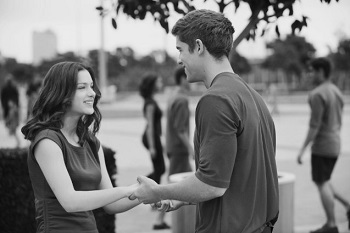 I took out all the color for symbolic reasons.To support this point the film starts out in black and white, and as Jonas' range of experiences grows with his training, so too does his color palette. Color starts to bleed in as he begins to behave more like a human and less like a terrifying cultbot; by the film's end he knows love, sorrow, and wonder, and sees in every color of the rainbow. The score behaves this way as well, though much more subtly. The effect is a well-executed parallel of the sensory aspects and the plot of the film, enhancing the effect of Jonas receiving old memories and knowing their experiences for the first time. Many of the memories, particularly those meant to inspire joy, are shot beautifully, blurred with motion and punctuated by brief moments of sharp clarity, as our real memories often are in our mind's eye.

This realism with the visual representation of memories brings me back to my point waaaaay up there about mixed results. The innocuous, happy stuff? Beautiful, moving, and delightful. Anything to do with violence or suffering? Sanitized to the point of looking almost cartoonish, and only briefly touched upon. The unpleasant memories are done well enough to suit the movie's purpose, but they're not in any sense given equal time or equal weight. Given the film's apparent dedication to its premise, I can only imagine this has to do with the desire to keep the film as family-friendly as possible. This was marketed as another dystopian YA adaptation, so we can't be wandering into how jarring and upsetting violence really is past a quick scene and Jonas fleeing the room. Heaven forbid we actually take a second to contemplate any of that.

In a similar vein, this world is bizarrely, utterly sexless. Sexuality is mentioned directly all of once, in which Jonas briefly mentions experiencing something clinically referred to as "the stirrings" (perhaps the creepiest of all possible terms for sexual desire) that he was given a medication for when he hit puberty. This is thrown at the audience quickly and never mentioned again. Despite the fact that babymaking is one of the most fundamental of all human activities, and often one of the most intense, it's totally glossed over here. Skipping over this in a film about embracing the full range of human experience would seem like a massive oversight, but it's YA. Can't have the kids knowing about the sex! (If your kid is watching this movie I'll bet you ten dollars they already know, parents, I'm sorry.) 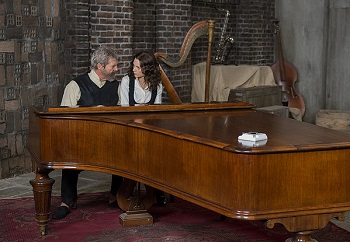 Okay, you can have the color back now.And that's really the biggest weakness of this film: by trying to keep things YA-friendly, they end up pulling all their punches. It makes the weirdly paced climax (and entire third act, really) feel sluggish and weak in comparison to the rest of the otherwise pretty powerful and poignant film. It does better at being a true dystopia for teens than other recent films it shares an audience with, but it would have been better served by following the lead of its protagonist and embracing the bad with the good in all its human glory.

If you're the sort of person who likes to read books and/or stay awake through Philosophy 101, then you'll probably recognize this is Plato's allegorical cave translated into something a little more human and relatable. Aside from some hesitancy to get down and dirty with the serious stuff and some weird choices in the third act, the movie pulls this off pretty well. Really, this is as close as a YA film can get to being subversive. If you want to feel some feelings and maybe think some thoughts, buy a ticket and watch Jeff Bridges and Brenton Thwaites knock it out of the park.

MINORITY REPORTS: So this YA movie about a sexless purity cult has brought in supporting performances by Taylor Swift, a YA darling who has made an entire career of playing a 23-year old fifteen-year old, and from Katie Holms, a woman who has literally escaped from a cult. And I thought Expendables was doing all the stunt casting this weekend. - Martin R "Vargo" Schneider

To be fair, it could have been creepier. Try "stirrings in my husband's bulge" on for size. - Sean "Keanu Grieves" Hanson