I guess cinema is not dead after all. Sherlock Holmes: A Game of Shadows and Young Adult prove that much. We'll just gloss over the whole Alvin and the Chipmunks: Chipwrecked thing.

Sherlock Holmes: A Game of Shadows

EXPECTATION: Having watched the first Sherlock Holmes turn Arthur Conan Doyle's beloved character into a somewhat entertaining bastardisation of himself, I feel I have a better idea of what to expect this time around. That's not to say that my hopes are high, far from it. The promotional materials for this make it look more like a rehash of Wild Wild West, complete with locomotive-based cross-dressing.

REALITY: It's nice to be surprised every once in a while. Sherlock Holmes: A Game of Shadows is not only a marked improvement on its predecessor, but also a rather interesting dissection of its source material, not to mention an excellent action-adventure blockbuster in its own right.

Dr. Watson (Jude Law) returns to London for his stag night, arranged by his best man Sherlock Holmes (Robert Downey Jr.). Unfortunately, Holmes is too distracted by his deep embroilment in a new case to give his best mate the proper send-off he deserves. Dragging Watson, gypsy fortune teller Madam Simza (Noomi Rapace) and his own brother Mycroft (Stephen Fry) across Europe to get to the bottom of the mystery, Holmes finds himself at odds with his nemesis Professor James Moriarty (Jarred Harris) every step of the way. 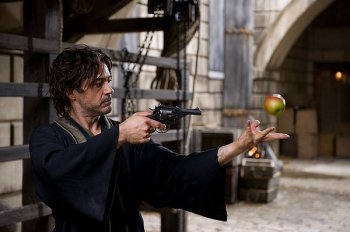 Behold, a gun that shoots apples!When I say that this film dissects its source material, I am specifically referring to two sources. First, there are the stories of Arthur Conan Doyle, from which this film draws Holmes' incredible deductive skills and the chemistry between the two leads. The second is Guy Ritchie's film Sherlock Holmes, from which Game of Shadows draws its bombastic action sequences and frenetic energy. While the previous film upset some people with how far it strayed from the stories upon which it was based, this sequel finds a happy compromise between the two. All those weird flourishes that irritated me about the first film suddenly work, and all the wonderful character dynamics are played up by an incredibly sharp and hilarious script by Michele and Kieran Mulroney.

You may remember my disdain at the handling of the action scenes in the previous film, with Holmes flubberty-druthering his way through a theoretical fight, only to then put it immediately into practice. This felt impractical and redundant. Here, the theory and practice start to differ greatly until the action becomes almost entirely theoretical, which is a pretty unique and astoundingly powerful effect. 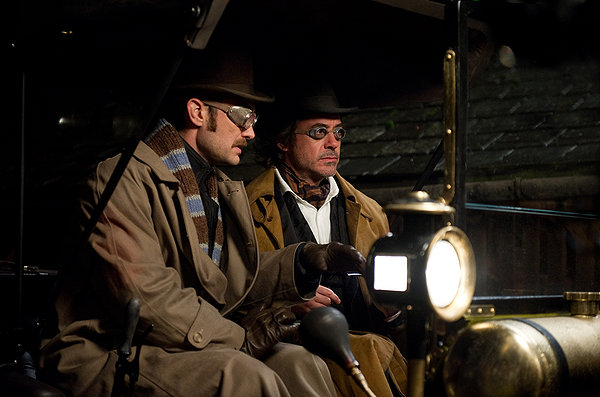 Fashion favours the bold, so they say.

The main reason this whole thing works so well is because of a heavy focus on comedy. It's worth saying that Sherlock Holmes: A Game of Shadows is one of the funniest films I've seen all year. Every scene is loaded with a wonderful wit and wry sense of humour. Primarily, this manifests itself in the relationship between Holmes and Watson, which is satisfyingly homoerotic and abusive. The question is constantly asked of Watson where he would be happier, adventuring with Holmes or honeymooning with his new wife. 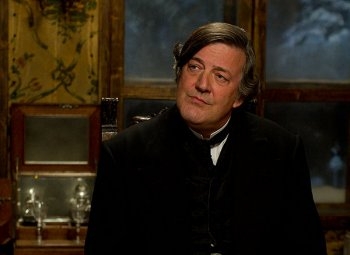 Fry has really perfected his "pretending to listen" look.Speaking of homoerotic, it is worth mentioning that one of the most interesting elements in this film is Mycroft. We all know Stephen Fry is a terrific comedic actor and a national treasure, so we know he can pull this character off perfectly. However, you may be surprised at what they have done with the character. Mycroft is now openly gay, but they don't really make a big deal out of it. I want to shake the hand of the man who said "Hey, you know what we should do? Make Mycroft gay! But not a stereotype, just don't draw too much attention to it." It's surprisingly progressive thinking to put behind a Hollywood blockbuster.

MINORITY REPORT: This film seems like the ultimate proof that League of Extraordinary Gentlemen was a good idea in theory, and that what ultimately ruined it was including ridiculous parodies of characters that had nothing to do with a Sherlock Holmes mystery. - Joseph "Jay Dub" Wade