Alvin and the Chipmunks: Chipwrecked

EXPECTATIONS: Last year, I nearly killed myself because of Yogi Bear. That was easily the nadir of my time writing for this column. I had discovered the true Lowest Common Denominator, and to this day I simply cannot fathom how a work of cinema could turn out so disastrously. But I've grown stronger since then. I've sought counseling, I'm taking medication, and I've been bathing myself in the dregs of cinema this year to prepare for the coming Alvinpocalypse. There's no way this film won't be atrocious, but I am ready. Do your worst, Alvin...

REALITY: I'm actually sort of disappointed in Alvin and the Chipmunks: Chipwrecked, and not for the obvious reasons. I was hoping this would be an abomination of the cinematic arts, something along the lines of Zookeeper or The Smurfs. These expectations, as warped and ironic as they may have been, simply were not met. Instead, the film actually puts in the minimum amount of effort into trying to spin a plot with a structure, character development, narrative payoffs, and all that mess. In spite of itself, it's not a complete embarrassment of a story, so I can't fault the film for that. I'll have to resort to other measures. 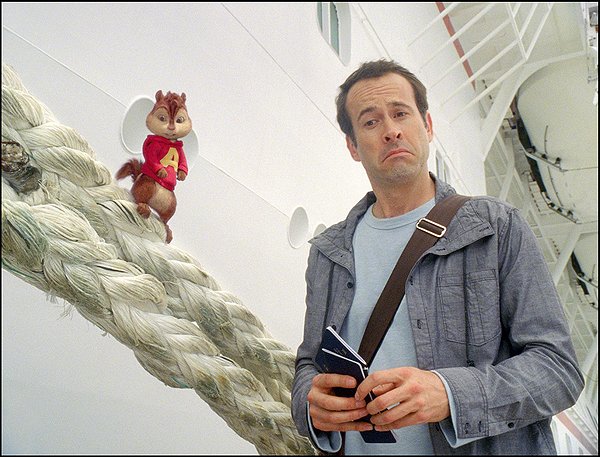 But, Alvin... how can a ship burn when it is surrounded by water?

I can't pinpoint exactly where in the film I felt it, but at a certain point during Chipwrecked, an overwhelming sense of sadness washed over me. It was a sensation wholly unexpected, and I was genuinely thrown off-guard by what I had just experienced. Suddenly, and seemingly without warning, a children's film about CGI rodents that sing and dance made me feel empathy for the characters inhabiting it.

I'm not talking about the Chipmunks here, because they aren't real. I'm talking about the very real human character of Dave Seville. You see, this isn't a franchise about chipmunks singing songs in funny voices and whipping their tails back and forth; it's about stretching a man's sanity to the breaking point, and then charging straight through that point with reckless abandon. Alvin and the Chipmunks is about Dave Seville slowly but surely coming to terms with the fact that he has lost his mind.

The film opens with Dave Seville (Jason Lee) boarding a cruise ship for vacation and trying to keep his cool as the Chipmunks and Chipettes (a bunch of celebrities huffing a lot of helium) sing a Go-Gos song no one in the film's target audience has ever heard. Within thirty seconds of boarding the ship Alvin does something wacky, forcing Dave to grovel in front of the ship's captain and beg him (not) to throw the chipmunks overboard. Instead, the chipmunks accidentally float away on a kite and wash up on a tropical island. There, the chipmunks sing more songs, build a tree fort, and meet a shipwrecked explorer named Zoe (Jenny Slate) who might or might not also be completely nuts. 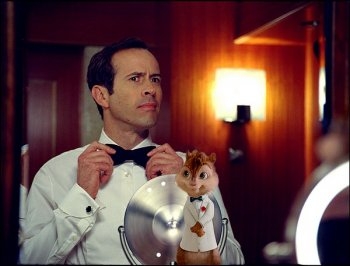 But, Alvin... I don't think I'm going to need to take the razor blade to dinner with me.Meanwhile, Dave chases after the chipmunks by washing ashore himself with a pelican-suited David Cross in tow, because why not? The bulk of Dave's screen time is spent wandering a tropical island and explaining to David Cross how much he cares about the chipmunks. This is important, because it means that while Dave spends all of his time talking out his feelings to a man in an animal suit, the actual animals spend the film having crises of faith and identity that ultimately clue the viewer into the film's dark, sticky truth: The Chipmunks are figments of Dave Seville's imagination. Granted, that's a pretty common reading of a story where a guy talks to animals, so to prove that I'm not quite as delusional as Dave, let me hit you with some evidence:

Of course, none of this evidence against Dave's sanity is to suggest that this is in any way a depressing film. It's merely suggesting... Okay, Chipwrecked is a pretty depressing film. Ignoring the notion that Dave Seville washed up on the island to deal with being the single father to six unruly, imaginary critters, the film is ultimately a black hole of entertainment that not even the Top 40 hits of six months ago can salvage.

Not even the introduction of Zoe, a much-needed female presence, can brighten up this film. I'd hate to give too much away, but with David Cross trapped in a bird costume, Zoe gets assigned the villain duties for the final act because, apparently, something has to happen for the plot to reach its conclusion. I guess making it off the island alive and having learned an important lesson about yourself just isn't enough these days. You also have to stop a crazy person from stealing the magical plot treasure before the magical plot volcano erupts and forces you to flee on your magical plot raft. For Dave Seville and his six split personalities, I guess that's all in a day's work.

*I laughed once. It was a Cast Away reference. I'm not proud.

MINORITY REPORT: Soon mister Wade will be forced to do what is commonly known amongst my friends as "offloading your chipmunks." The process involves cranial application of a normal household drill. In my day, we did not have the electric variety, which is how I got these disfiguring scars. - Montague "Legally Sane" Smythe