EXPECTATIONS: I don't know what this is. No, seriously, I've never heard of this movie, and it seems no one else has, either. The ticket guy had to get on IMDB because he thought I was lying. From looking at the poster, I can see that it stars Channing Tatum and it looks like last year's Robin Hood, so there are two strikes already. Yes, I realize it's unprofessional to form my preconceptions based solely on the poster, but let's face it, the only reason I'm in this theater is that the other choice was that Justin Bieber movie. Standards aren't exactly high at the moment.

REALITY: The Eagle is a film with a lot of underlying subtextual themes. (Surprisingly, none of them are gay.) The film follows Roman general Marcus Aquila (Channing Tatum) as he takes command of a platoon in Roman-occupied Britain around 140 AD. Immediately the film takes an uneven tone, and I found myself thinking, "Gee, 2nd-Century Roman soldiers sure do act and talk exactly like American soldiers in 2011!" It's never really made clear whether this is because the film wants to make a point or because Channing Tatum is a lousy actor. Let's give it the benefit of the doubt and say it's the former.

After being run over by a chariot with blades sticking out of the spokes, Marcus is given an honorable discharge and sent to stay in the care of his uncle (Donald Sutherland). You know, let's revisit the first half of that sentence, because it's more worth revisiting than Donald Sutherland is at this point. In one of the movie's early battle scenes, Marcus throws a lance through the chest of the driver of what is essentially the early Roman version of the Mach 5. Anyway, Marcus saves the life of British slave Esca (Jamie Bell), and because some pansy politician insults him, the two set off into the tribal lands of Northern Britain to bring back the metal eagle, the emblem of the Ninth Legion, who had disappeared twenty years prior under the command of Marcus' father. At the end of that long sentence, the audience members nod their heads and say "Oh, that's what this movie's about."

From there we embark on a standard quest narrative, with Esca and Marcus traveling through the highlands, stopping occasionally to talk about honor and their differences and other things that seem perfectly natural for a slave and his owner to discuss. The dynamic between the two characters isn't that interesting, but the one between the actors is. Of the two, only one is actually talented, and let's face it, I'm not talking about Tatum. If this is intentional, it's brilliant. Just as Marcus learns he must rely on Esca's abilities to complete his task, Tatum must rely on Bell to carry the film. This works pretty well for a while, with the two asking people questions and getting attacked by the occasional rogue warriors. They eventually meet a Ninth Legion deserter (Mark Strong), and if we're believing this movie is really about American soldiers, he's the old 'Nam vet. You know, the "I've seen some things, man!" type. Everything's running along smoothly, even entertainingly. Then we come to the village of the fucking Seal Tribe. 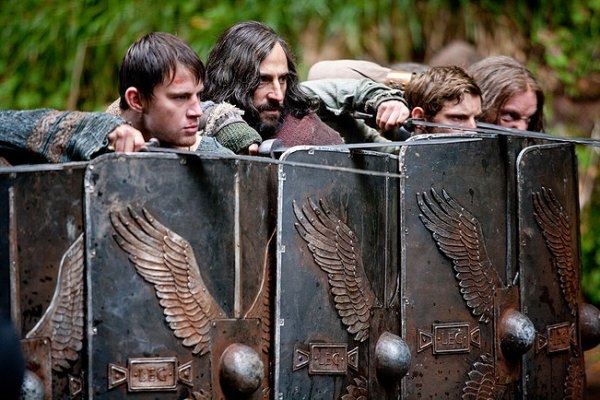 I'm sure this four-man army is very fearsome, but you could probably just walk around them.

Marcus and Esca eventually stumble into the mercy of the people who slaughtered Marcus' father's legion. In order to avoid death, Esca quickly tells the tribe Marcus is his slave and they are traveling. This role reversal should be more interesting, but instead it just stops the movie dead. There's none of the tension debating Esca's loyalty that the film wants, and it ends in the most awkward tribal-drug-dance orgy this side of Avatar. This should have been a time of development for Esca's character, but instead a good chunk of the film goes by with nothing happening, then just tosses in one last quick battle scene for good measure. Then, out of nowhere, the film ends like it's a buddy comedy. I'm not joking, I expected Marcus and Esca to high-five each other on the way out as the credits rolled.

That's really the film's major fault: It's completely schizophrenic in its themes. The film doesn't really make it difficult to see what it's going for (Hint: Rome isn't the only country that makes a big deal about eagles), but it just feels like it should be better at it. The first bad guy we encounter is a dark-skinned man with a long beard who decapitates his hostages in public view. We're not being subtle here. You might as well have Ron Perlman recite that "War never changes" while you're at it. But then, the movie flows into something else, as Esca and Marcus realize how similar they are, and Marcus grows to respect the Britons. (Marcus also goes from being able to detect an incoming attack by hearing some grass rustle to not being able to see some guys who are right behind Esca; his ability as a general varies depending on if the film wants him to be a hero or a jackass for that scene.) The basic message of the incredibly brief final battle is: "We're all the same, this is a stupid thing to fight over. Well, let's fight over it anyway."

I don't feel like I'm misguided in looking for symbolism in a movie about a symbol. Hell, according to IMDB, Marcus' last name is the Latin word for "Eagle." The main character looks like an American soldier, he's looking for an American symbol, and he's essentially named "America McDemocracy!" Yet the whole thing is almost like an antithesis of American military romanticism films. It's like a response to 300 that they made five years too late. As a result, what could have been decent commentary is actually grating transparency. When Esca and Marcus essentially look at the screen and say "It's time to give up the wars of our fathers," all I can think is "You guys know that Bush isn't President anymore, right?"

MINORITY REPORT: The whole thing sounds like a terrible rehash of Conan the Barbarian without the giant snakes, graphic decapitations or Max von Sydow. So basically, without the fun. -Ian "ProfessorClumsy" Maddison