Just Go With It

EXPECTATIONS: The TV ads for Adam Sandler's latest vacation encourage you to "tell your girlfriend it's a romantic comedy." If I still had a girlfriend, I can safely say I'd have no problem whatsoever telling her this, because I'm pretty sure it IS a romantic comedy. Does your film feature a hot up-and-coming actress? Is Adam Sandler trying to woo her? If so, then I'm sorry, but you've made a romantic comedy. It'll probably have a shit-ton of fart jokes, and Sandler will probably scream at a small child, but there is absolutely no question as to what kind of movie this actually is.

REALITY: I feel like I need to say this right up front: Just Go With It made me laugh. That doesn't mean I enjoyed it or thought it was a good movie in any way. But it did make me laugh. That's more than I can say for similar 'comedians-go-on-vacation' movies like Couples Retreat or even Sandler's own Grown Ups. That said, Just Go With It is every bit as formulaic and dumb as those movies, and somehow just as personally offensive. 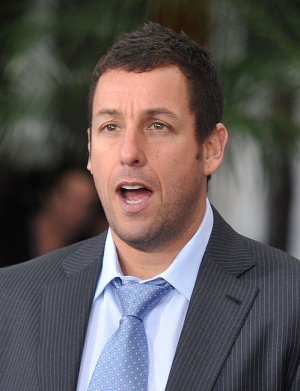 "Haaaaaaaaaaaaaaaaaaaaaaaaaa!"This time around, Adam Sandler gets to play a plastic surgeon named Danny Maccabee (get it? He's super-Jewish). One night, Danny discovers that pretending to be married to a hateful shrew helps him meet women. This powerful technique gets him laid pretty constantly for the better part of twenty years. Then one night at a mixer, Danny meets Palmer (Brooklyn Decker), a 23-year-old blonde dreamgirl who falls for Danny without him ever telling her about his fake bitch of a wife. And then she discovers his fake wedding ring. Without skipping a beat, Danny begins spinning a web of lies: Danny and his wife are getting a divorce, so Palmer wants to meet this mystery woman. Enter Danny's nurse Katherine (Jennifer Aniston), who agrees to pose as his soon-to-be-ex-wife. Her two kids are now their two kids, one of whom decides to put on a British accent because she's acting, so why not? The whole gang agrees to take a vacation in Hawaii, where Danny's cousin (Nick Swarsdon) tags along posing as Katherine's new beau Dolph Lundgren. (No, not that Dolph Lundgren.)

I'd try to explain this clusterfuck of a plot further, but to be honest, it kind of got away from me after a while. Nicole Kidman and Dave Matthews show up in Hawaii as two of Katherine's old college friends, and to keep up appearances, Katherine begins making up her own set of lies on top of Danny's big wacky story. At that point in the story, I decided to stop caring, because even they clearly couldn't be bothered to follow their own plot anymore.

At the start of this whole charade, Katherine's daughter explains that the first rule of improv is "Just go with it." Oh, is that what we're doing here? Improv? I thought we were trying to convince a blonde person we were telling the truth, not make her laugh out of embarrassment. One ad-lib rolls into another, and into another, and eventually the whole thing snowballs into something nobody understands because everyone has just gone with everyone else's stupid attempts at ad-libbing. That's not just this movie, it's every improv show I've ever seen. Sure, it might get a chuckle every now and then, but it's utter nonsense.

I guarantee you this movie was born on the set of Grown Ups. While Adam Sandler and all his comedian buddies were sitting around making wisecracks at each other, someone probably said, "You know what would be great? A movie about a guy who uses his improv skills to get women. Like, maybe he'd have to ad-lib a fake life to convince her of how awesome he is. How easy would that be?" Too easy. And I'll be damned if that isn't exactly what Adam Sandler did. At the movie's core, Just Go With It is about a guy getting ahead in his love life by constantly making up lies. If that isn't the comedian's dream, I don't know what is. 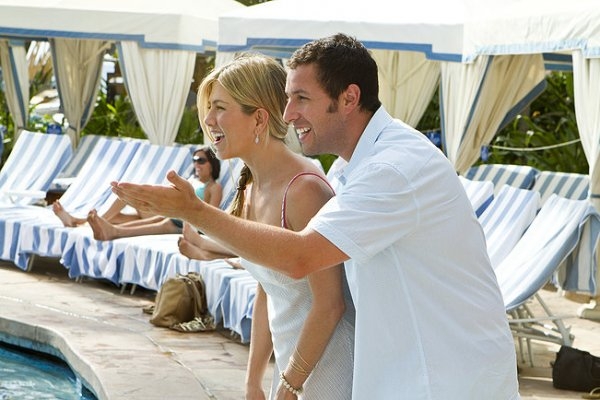 You know why they use images like to promote films? It sows the seed of intrigue in the potential viewer to find out what hilarious stuff is happening just off screen.

The irony in all that is the fact that this movie feels meticulously scripted, sometimes too scripted. At just under two hours, Just Go With It feels like the product of a lazy comedian coasting on his lagging abilities and a writer trying to see how far he can tease out the movie's one narrative hook. Eventually, the whole thing starts feeling like it's repeating itself without resolving anything.

Speaking of not resolving anything, after all the setup and narrative twists this movie puts forward, the whole thing gets resolved by a fucking voiceover. While talking to the girl he eventually woos (can you figure out which one?), Sandler's voiceover tells us all about how he fixed everything with the other girl and that everybody's happy now. Would Happy Gilmore have been better if it ended with Happy thinking "Isn't it great that I beat Shooter McGavin with my super mini-golf skills?" No, of course not! So why is it suddenly okay here? Somebody got lazy, and I'm willing to bet it was Adam Sandler.

That's really the movie in a nutshell. Adam Sandler decides he's okay with being Hollywood's most lovable doofus, but he still wants to make movies about hooking up with hot women and Jennifer Aniston. They get to prance around in fancy dresses and high heels, he gets to schlubb around in a T-shirt, and we get to pretend those two extremes can coexist. I'm not saying it's not occasionally funny. I'm just saying it's lazy. So, so lazy.

MINORITY REPORTS: I'm not convinced that Adam Sandler remembers how normal people behave anymore. I can only believe him when he's playing oddball character, like in Punch Drunk Love. For him to start attempting to play characters that audiences can actually relate to makes me wonder when was the last time he held a conversation with someone who works for a living. -Ian "ProfessorClumsy" Maddison

I don't know what Jennifer Aniston is complaining about. At this point, a fake marriage is the best she can hope for! Hey-oooo! - Martin R. "Vargo "Schneider