In spite of it being cinema's most dreaded month, we came upon a couple of gems this week. First off, Ian "ProfessorClumsy" Maddison is pleasantly surprised by The Green Hornet. Then, Martin R. "Vargo" Schneider finds himself enthralled by The King's Speech. Alas, poor Joseph "Jay Dub" Wade had to endure The Dilemma.

EXPECTATIONS: Every trailer for The Green Hornet makes me want to eat my own head in frustration. How can so many apparently talented people get together to make something that looks so dull? Maybe I'm being mis-sold by an overzealous marketing department that's desperate to appeal to the young crowd while downplaying the presence of an actual Asian starring in an American film. Or maybe I'll hate The Green Hornet with every fibre of my being.

REALITY: I don't know what to say: It seems that every time I prepare myself to hate something I end up loving it. The Green Hornet is a massively entertaining action-comedy spectacular about our desire to do something better with our lives and the relationships we forge that make these things possible. It's a little cliched at times, and it treads some old ground on both the buddy comedy and superhero fronts, but everything it does is loaded with genuine warmth and good humour. It does everything that the Iron Man movies tried to do, but with a soul (and a script).

We follow the exploits of billionaire playboy Britt Reid (Seth Rogen), who lives in the shadow of his father James (Tom Wilkinson), owner of The Daily Sentinel, the best-regarded newspaper in Los Angeles. After James dies, Britt is suddenly hit with the realisation that his life has no purpose. Worse still, his morning coffee has lost its lustre! Tracking down the source of his lost coffee perfection, he finds Kato (Jay Chou), a talented mechanic, martial-artist, illustrator, barista and general all-around genius and nice guy with the power to slow down time. Just the right kind of guy to have on your side during a fight. 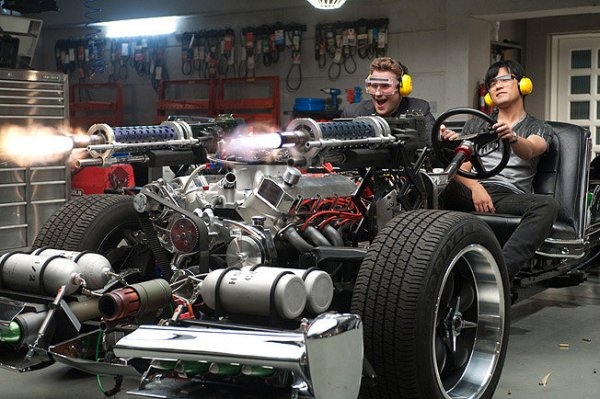 It may be difficult to accept Rogen as an action hero, which is why he brought Jay Chou along.

After a drunken prank goes awry, Britt has the crazy idea of forming a crime-fighting duo, giving himself the name "The Green Hornet" (obviously) and leaving Kato as his unnamed, unseen (because he is too fast for television) sidekick. Setting themselves up within Britt's company, the duo hires criminology expert Lenore Case (Cameron Diaz) as its permanent secretary and has her unwittingly plan The Green Hornet's every move. In time, they move closer to the king of all criminal activity in L.A. in the shape of Chudnofsky (Christoph Waltz), a being of pure evil suffering from a midlife crisis in this new world of gimmicky costumed characters.

This film's greatest virtue is its sincerity. The characters -- all of them -- are written and performed with such honesty and humanity that it is impossible not to warm to them. Even Chudnofsky is a likable and amusing presence, so much so that I felt a little sorry for him at times, like when people continually tell him he's not all that scary in spite of his double-barreled pistol that was "very hard to make." It's unusual and refreshing to see an arc that involves a villain trying to overcome his shortcomings before taking on the hero, and it makes his eventual desperation all the more logical and interesting.

The primary focus of the story is the tumultuous friendship between Britt Reid and Kato. Reid's desire to hog the limelight and be the Green Hornet is hampered by the fact that Kato literally does everything for him: He drives the car, fights the dudes, makes the plans, etc. So Kato feels unappreciated and Britt feels worthless, which leads to some tension between the two. Every moment these two characters are on screen together is wonderful, and I can't help but feel that it has a lot to do with the fact that this dynamic reflects the reality of the actors portraying them. Seth Rogen seems to be outstaying his welcome with a lot of audiences and is beginning to be seen as a one-trick-pony. Personally, I've only recently started to warm to him, but his awareness of public opinion has certainly shaped the character here. Perhaps more interesting is Jay Chou, a multi-talented, multi-lingual singer, actor and martial artist who is so unrecognised and under-appreciated that most people seem to think he is John Cho, including the IMDB!

The third member of the team is the Black Beauty, Kato's gadget-filled car. Many of the action set-pieces involve some pretty inventive automotive action, especially the climactic scene, which gets very intense and surprisingly brutal before the end. Really, the car is an extension of Kato, and any scene involving him driving or kicking arse is realised in an attempt to try something new. Kato has a latent super power that allows him to slow down time and select targets in what director Michel Gondry has dubbed "Kato-Vision," which seems to owe a debt to Robocop. I love the idea that super powers are just one of those things that pop up in certain people, and that it's always the most gifted people who end up getting it. You could almost resent Kato for being Mr. Perfect, but Jay Chou is just such a charming screen presence and everything he does is so entertaining that you just can't help but love him. 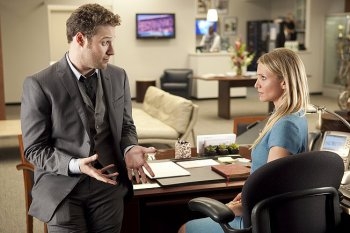 I just wanted to include a screenshot with no danger of anyone being confused with John Cho.I laughed from start to finish, I was thrilled by the action and I left wanting more. Hell, I almost cheered out loud at one point, and that's just plain un-English of me. It might appear that I have only the best things to say about this film. But, in some ways The Green Hornet is really just an upgraded version of Pineapple Express. (That's not always a bad thing; Michael Mann has been remaking the same movie for years to critical acclaim.) While I do think this is the better film, if you saw Pineapple Express you will already know by now how you will react to this one. But be sure of one thing: Between the two films, Seth Rogen and Evan Goldberg have proven that they can write one hell of an action climax, and all the Rogen haters out there will one day be forced to admit that most of the heart, soul and honesty in The Green Hornet is almost entirely due to his writing.

MINORITY REPORT: I am beginning to suspect that I am not in the Green Hornet movie. - John Cho, via twitter