EXPECTATIONS: I'm at a loss for words here because 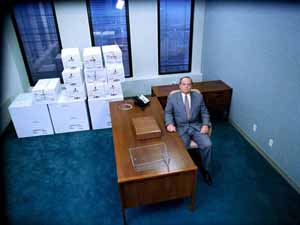 Frank (Robert De Niro) spends his last day of retirement in contemplation of the road trip he's about to embark on to reunite his family. I'm going into Everybody's Fine knowing absolutely nothing about it other than it stars a few actors I like. I've never seen a trailer or TV spot, so here's to hoping it's decent and doesn't make me regret not spending my Friday night in my usual routine: stay home, pick my nose, browse the Internet for pornography, sleep.

REALITY: On the whole, I should've stuck with my routine.

In Everybody's Fine, the latest film from Kirk Jones, Robert De Niro plays Frank Goode, a recent widower who is looking to reconcile with his four children, with whom he feels he has an estranged relationship. Unable to get his sons and daughters together in the same place due to their busy lives, he decides to embark on a cross-country journey to visit and reconnect with each one. Cinematically speaking, Everybody's Fine is the closest relative of About Schmidt -- I'm sure of this because the whole time I kept thinking to myself, "Wow, this is so much like About Schmidt, without the jokes."

Yes, the one thing that surprised me about Everything's Fine had to do not with the film itself, but with how it was marketed. After seeing the movie I went online to learn more, only to discover Miramax was pitching it as a warm-hearted comedy, which must be a cruel joke because there is little about Everybody's Fine that's funny, intentional or otherwise. It's actually surprisingly melancholy at times, as we see Frank struggling to get his kids to be honest with him about their unhappy lives and to fess up about what they know about their missing brother, David.

That's not to say Everybody's Fine is a humorless affair. A few scenes provoke some laughter (chuckles, really), thanks to Frank's self-deprecating sense of humor and the colorful characters he meets on his journey. However, the jokes exist primarily to distract the audience from the film's Hollywood sentimentalism, which works about as often as it doesn't. 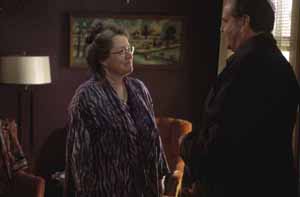 Frank (still Robert De Niro, as you might expect) finds a kindred soul in his future sister-in-law in About Schm -- I mean, Everybody's Fine.Robert De Niro works well as the charming and low-key Frank Goode, a man who, now in the autumn years of his life, is trying to assess his successes and failings as a father. Drew Barrymore, Kate Beckinsale and Sam Rockwell also turn in quality performances as Frank's children, but when they get together and start reminiscing over their relationships, the films starts showing a few cracks and tears. As you might imagine in a film like this, confessions are made, people come to terms with one another and there are reconciliations between characters. When that happens, a predictable mope-off begins, all of which feels a little too phony and forced at times.

There's even a scene in the third act where the family gets together in one room and as one character begins to cry, so does another and another and another until the whole room is practically drowning in tears. You know how it is -- put a sick man into a crowded room, have him vomit and before you know it everyone's blowing chunks. There's even a bizarre dream sequence in which Frank has a long, sincere conversation with all of his children about their adult lives, only the kids are now in the form of prepubescent tykes. It seems like a clever scene on paper, but when Frank and one his daughters have a serious conversation about her pregnancy it all comes off as hilariously awkward, seeing as how his daughter looks no older than ten.

In the end, the movie exercises a bit of mercy on its audience, playing itself out on something of a high note. That's all well and good, but I wonder if it was the correct approach for a film of this subject matter. Perhaps Everybody's Fine should have been funnier and ended with a bit of darkly comic bitter cynicism, but I suppose if that's the angle the filmmakers had gone with, we would have the exact same film as About Schmidt, only with more kids.

I didn't hate Everybody's Fine. It's not without its touching moments, and the performances are great when everyone's not trying to beat each other in a sobbing contest, but I couldn't help but compare it to other films that deal with the subject of family disillusionment (Ang Lee's vastly superior The Ice Storm immediately comes to mind). Everybody's Fine comes off as the kind of film that weepy grandmothers who like touchy-feely movies with modestly happy endings would enjoy, but for me this one felt more to me like a Tokyo Story for people who hate movies that are in black and white and have subtitles.

Robert "Macrame_God" Seeders is currently watching Nagisa Oshima's In the Realm of the Senses -- for purely academic purposes, of course.

MINORITY REPORT: De Niro has starred in great films, but lately it's been stinker after stinker -- Meet the Fockers, Righteous Kill and now this. As such, Everybody's Fine makes a great argument for federal decriminalization of assisted suicide. Consider the following hypothetical: What if, after Taxi Driver, a kind angel of mercy strolled leisurely toward De Niro, took his young hand and said, "Walk with me toward the light, for I have seen the future and...well, trust me, it's better this way." Macrame_God might have found Everybody's Fine to be mediocre, but I'm going to go a step further and say this: If Everybody's Fine is considered Oscar bait (which it probably is, given the December release date), then the Academy won't be able to find ten movies to nominate for Best Picture. Robert, go gently into that good night, and for the love of all that's holy, hurry the fuck up. -David "Data Core Devil" del Vacoté III