In a perfect world, the week before Christmas would be filled with only the most wonderful of things. However, this is rarely the case, as evidenced by this week's crop, which includes a letdown of a belated sequel and a travesty of a belated cartoon adaptation. As Norm MacDonald once said, Happy birthday, baby Jesus. Hope you like crap!

EXPECTATIONS: I have to admit, I am a big fan of the original Tron. For all of its flaws, it was pretty groundbreaking for its time. This belated sequel has been setting the Internet ablaze with its viral marketing campaign and its Daft Punk soundtrack, but will the film live up the hype?

REALITY: Is there anything in this world that can render you speechless quite like disappointment? Tron Legacy took nearly thirty years to get here, and what we get for our patience is a slightly dull and uneventful action/adventure flick. Visually spectacular as it is, it never really goes anywhere, and it fails to really excite or connect with its audience. 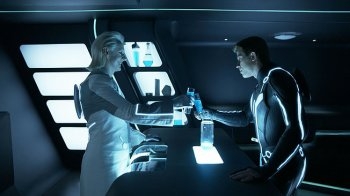 Everybody's favourite Welshman Michael Sheen makes an appearence and even invents a new type of ham for the occasion.In 1989, Kevin Flynn (Jeff Bridges) mysteriously vanishes from the face of the Earth and is never seen or heard from again -- until twenty-one years later, when his old friend and colleague Alan Bradley (Bruce Boxleitner) receives a page from Flynn's office. Rather than going there himself, Bradley decides to take the news to Flynn's now-adult son Sam (Garrett Hedlund). Sam checks in on Flynn's arcade and finds his secret office, only to hit by a familiar laser beam that transports him to The Grid, the world inside a computer network where programs live like people.

In The Grid, not all is well: Stray programs are rounded up and forced to play video games, which are genuine fights for survival in this world. Sam soon finds himself in the midst of a Frisbee war that leads him directly to The Grid's evil overlord Clu (Jeff Bridges). Clu personally challenges Sam to a lightcycle duel that is cut short by a daring rescue from Quorra (Olivia Wilde), who takes Sam to his father (also Jeff Bridges). Finally reunited, the Flynns must attempt a daring rescue to shut down Clu from the outside and save The Grid.

It sounds very exciting, doesn't it? That's what I thought too, even after twenty minutes of the film: Everything in the first act is so heart-pounding and bombastic that it's hard to believe the rest of the movie is so dull in comparison. The major exploration of this film is the idea that in this perfect digital world designed by man, God steps in and shows his hand, just to let everyone know who's in charge. So Flynn gains a great amount of humility from this miracle and Clu is stuck in an unlearning, never-growing stage of life. As interesting an idea as that is, it is never really given enough weight or time to make its own point, and it doesn't really draw itself out to a logical conclusion.

The great miracle here is the creation of some new lifeforms called Isos, whose presence greatly offends Clu. Clu's aspirations toward godliness make him some kind of digital Super Hitler, committing genocide on the Isos and leading an invasion on our world. Considering the original Tron evoked many Biblical references, it's not such a huge stretch to evoke The Holocaust for the belated sequel, though it does amuse me that such a film would be Disney's big Christmas release.

Speaking of Disney, I know they make a lot of money from merchandise sales, but do they really need to devote so much screen time to close-ups of Tron-related toys, posters and video games? It seems Disney has completely dropped the priority of the films themselves, and it retroactively gives the Toy Story series a bit of a sour aftertaste. 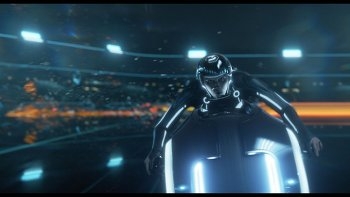 The lightcycles return, but now they can turn in increments of less than ninety degrees.So, there's a lot going on here that doesn't really go anywhere. Add to this a character named Rinzler, a hard-arse bad guy who is indistinguishable from all the other faceless orange baddies except he has two Frisbees and a breathing problem. Rinzler is established early on as some kind of gaming champion who gives Sam a run for his money in Frisbee wars. The thing is, we're supposed to fear this character, but we couldn't even pick him out of a line-up because his helmet and costume make him blend in with all of Clu's various goons. It wouldn't be so bad if he were simply a slightly more fearsome henchman, but a plot twist regarding this character crops up at a certain point. I will not spoil it, but I will say that it drops like a lead turd and lingers in a grossly ineffective pile on the cinema floor until the film ends.

It's not all a waste, though. Jeff Bridges turns in two excellent performances as the hero and villain of the piece. As Flynn, he is really an extension of himself, a zen hippie who still finds everything really amazing, even though he's been there for nearly thirty years. With Clu, I'd expected more of the goofy physicality he displayed in the previous film, but instead he goes for a much more understated performance. This actually causes some issues. To realise Clu, Bridges' face has been rendered in CGI to emulate his own younger appearance. It looks fine during the grander moments; laughter and anger look natural, but more subtle facial movements just look wrong, as though he's spent the past thirty years shoveling Botox into his lips and forehead.

Stylistically speaking, the visuals are jaw-dropping (Clu's face notwithstanding) and Daft Punk does an admirable job with the score, thundering rhythmically throughout the film. Both the aesthetic and the soundtrack are reminiscent of the original Tron without being identical. It's a logical progression of the world of technology, and it makes sense not to render it the exact same way when the visual effects capabilities are there. That said, this is not as groundbreaking as its predecessor, mostly because Avatar stole that particular limelight last year and became this generation's Tron. I'm not quite sure where that leaves Tron: Legacy, somewhere in cinema limbo perhaps.

MINORITY REPORT: They made a movie out of that Kingdom Hearts II level? - Martin R. "Vargo" Schneider