EXPECTATIONS: How is this remotely fair? Our resident Stuffy Brit gets to go see the kung-fu-action-sweet-explosion-kick-ass-car movie, while I, the red-blooded comic-book-reading American youth have to watch Stuffy British people do Stuffy British things? This movie is so damn "Hail Brittanica" that it was partially funded by British lottery dollars. You made a film about the classiest, most distinguished people in England with money you tricked from whatever the British equivalent of a trailer park is! You got the whole country in on it! Well, I'm an American, buddy, and I won't expand my cultural horizons without a fight.

REALITY: I don't know if this is the case in England, but here in the US The King's Speech is a practical cavalcade of depressingly unrecognized actors. Allow me to break down for you how the average moviegoer views this cast: That guy from Bridget Jones (Not Hugh Grant, the other one), The bad guy from Pirates of the Carribean, and Tim Burton's wife. Dear reader, please don't be the person in line who says these things. Let my mother be that person. You're better than that. This is a classy movie, and it deserves to be treated as such. You might want to bring a monocle with you, just in case.

The King's Speech, which follows the story of King George VI as he tries to conquer his debilitating stutter, may be The Social Network's top contender for Film of the Year. This is only noteworthy because on paper, "Royal Speech Therapy" is probably the only thing that sounds less entertaining than "The invention of Facebook." However, The King's Speech triumphs over its blatant award-baiting premise to become a tale that is actually a lot of fun to watch.

Most of the credit for this can be given to Colin Firth and Geoffrey Rush, who play the Duke of York/King George VI and his speech therapist Lionel Logue as multifaceted, realistic human beings. Neither character is perfect; The Duke is arrogant and temperamental, Lionel is presumptuous and nosy, and that's how it should be. The two play so well off each other, you start to wish that the entire film consisted of them saying tongue twisters back and forth. The politics of England at the forefront of World War II are interesting and all, but the story of these two men's friendship is really at the forefront of the film. Firth and Rush are so good at it, they could have been playing any two men at any point in history and it would still be just as entertaining. 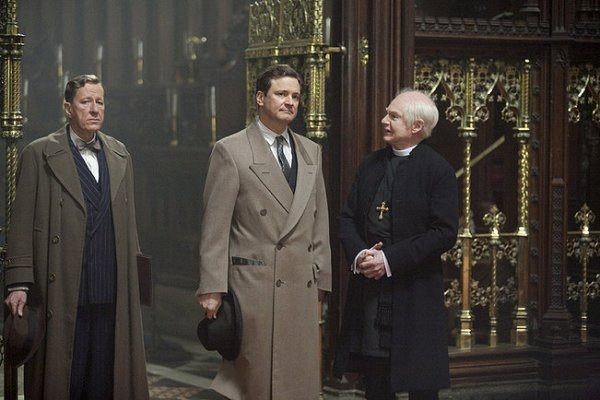 Oh hello, Derek Jacobi. Didn't you used to be an actor?

This is where director Tom Hooper steps in. Because the film is about a royal and a middle-class man seeing each other as equals, he frames the characters so that they take turns being in a position of dominance. This is done both through their performances, and via camera tricks that are fun to watch if you catch them. During several of Lionel and George's conversations, the camera will start incredibly zoomed out so that one of them is enveloped by the other, or by the scenery. As the scene goes on, each cut-away of the camera gets closer and closer, until the men are of equal size on the screen. It creates a mood that sticks with the viewer, and it's subtle enough not to detract from the performances.

However, that's where the subtleties end. If the film has a weakness, it's that it expects us to believe that Colin Firth is Guy Pearce's younger brother. But if it has a fault beyond THAT, it's that it knows it's an award film, and there are moments, particularly when George breaks down crying, that scream "NOMINATE ME!" to the point of eye-rolling. When the film wants to illustrate that George VI may have had issues with George V (Michael Gambon), it has him repeat "Father" over and over, while making an extreme close-up of Colin Firth's mouth. In a film this good, it just makes you ask "Why?" To which the producers can answer "American audiences" and you can respond, "Good point!" (Side note: I'm amazed that a film backed by the British government portrayed King Edward VIII, played by Guy Pearce, as such a selfish douche, even if it was historically accurate. He was still the king at one point. Ulysses S. Grant could've eaten a baby during his time in office, good luck getting that script approved.)

What keeps this film from being a standard inspirational Oscar flick, apart from the strong performances, is a clever script. If nothing else convinces you to see this film, then try telling yourself it's the best comedy in theaters right now. Firth stammers out "Timing isn't my strong suit," but he is a damn liar, because every moment of dialogue between he and Rush is as hilarious as it is compelling. This is crucial, because as far as action goes, there's not much to go on. When your climactic moment boils down to "A guy talks into a microphone or he doesn't," you can't rely on dramatic tension to carry you through.

I'd also like to take a moment to recognize here that Helena Bonham Carter is in fact, a good actress, and she should take more roles in films that aren't Tim Burton's. Or Burton should stop making films, I'd be happy either way. And since England only has about thirty actors or so, Timothy Spall pops in to play Churchill, though for half the movie I thought he was The Penguin. The only reason I mention Spall to begin with is that he's a good actor who is great in whatever bit part he plays. Here, Spall gives a good performance that will be overlooked in a film filled with overlooked performers. He is the biggest "That Guy" at the "These Guys" convention. And when you see him, you will think "It's the rat-dude from Harry Potter!" and then you should take the monocle off, sir, you just don't deserve it.

MINORITY REPORT: In Britain, this would be considered an all-star cast. Timothy Spall and Colin Firth are particularly recognisable names. But we don't have the religious zeal for our political leaders that you Americans do either. Some of those monarchs were crazy fuckers. - Ian "ProfessorClumsy" Maddison