EXPECTATIONS: The Judge is a courtroom drama from the director of Fred Claus. I can't think of a sadder combination of words in the entire English language.

REALITY: Life is too short to waste your time obsessing over certain conundrums. "I haven't seen my father in twenty years. How am I supposed to face him now? What will the people back home think of me? Whatever happened to that girl I knew in high school? Who the hell left the door open and let Dax Shepard back in? I told you idiots to keep it locked!" Most people ask themselves these questions, and the time spent trying to answer them would be better served doing literally anything else. To that end, life is definitely too short for maudlin crap like The Judge.

When Big City attorney Hank Palmer (Robert Downey Jr.) gets news that his mom has died, he walks out in the middle of a trial and returns home to Smalltown, USA. He comes home to find brothers Glen (Vincent D'Onofrio) and Dale (Jeremy Strong) devastated, but their father, Judge Palmer (Robert Duvall), as stoic and bad-tempered as ever. The next morning, police arrest the judge under suspicion of killing a man the night before in a hit-and-run incident. Judge Palmer hires a local attorney with practically no experience (Dax Shepard), but Hank quickly insists on defending his father in court against Dwight Dickham (Billy Bob Thornton), a prosecutor with a vaguely-defined score to settle. 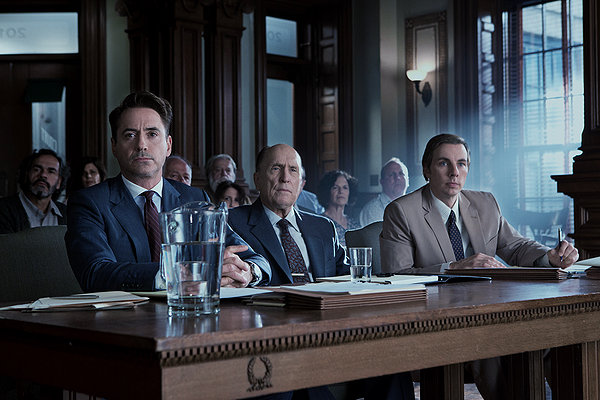 Hank and his father hash out their thousands of differences over the course of two and a half hours, revealing more evidence for Hank's case. His dad may or may not have been drinking; he may or may not have been heavily medicated for an undisclosed illness; the victim may or may not have totally had it coming. Every fight they have answers more of these questions, but the long road to get there is exhausting. This would be a fine way to structure the film if the case was compelling in any fashion whatsoever. Pretty quickly, we discover this whole charade is a total open-and-shut case, the kind even Law & Order would have trouble stretching into an entire episode. Still, everyone insists on drawing this thing out because, dammit, there has to be some extra drama to squeeze out of this mess somewhere!

To pad things out and make mom and dad feel like they're getting their money's worth, Hank reconnects with his high school sweetheart, Samantha (Vera Farmiga). Sam shows Hank that their town has done just fine in his absence. She's an entrepreneur with a thriving local business, and her twenty-something daughter (Leighton Meester) has more in common with Hank than Sam is willing to admit. This leads us down a rabbit hole of incest jokes, as one of the first things Hank does upon returning home is to head down to the bar and make out with his could-be daughter in a derelict phone booth.

Granted, all of this is drama that Hank has to make his peace with, one way or another. That's why he spends most of the film wandering around town by himself, hiding behind a Tony Stark persona and making snarky comments to anyone and everything. Hank makes no bones about the fact that he's kind of a terrible person, and that his father has only himself to blame for that. So why, exactly, are we supposed to like Hank at all? Does the asshole attorney secretly have a heart of gold? Is there some redemptive light at the end of this long, dark tunnel? Or are we just supposed to roll with it because it's Robert Downey Jr.? 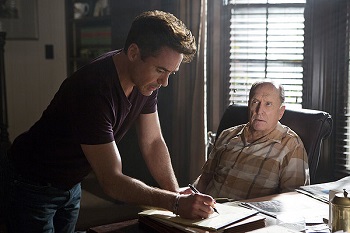 Weirder still, the actual trial steals most of its beats and turns from My Cousin Vinny. You remember My Cousin Vinny; Joe Pesci plays a big city lawyer who comes down to Smalltown, USA, looks at a bunch of tire tracks, marvels at the horrors of rural America and then manages to get a family member acquitted of murder. All things considered, it's still a pretty funny movie, and that's the key difference. Vinny takes the courtroom drama and spins it into a fish-out-of-water comedy because the actual trial is ridiculous. The Judge's trial is equally ridiculous, but screenwriters Nick Schenk and Bill Dubuque are so hellbent on wringing every bit of melodrama out of this situation that they never realize how relentlessly boring they're making it.

Janusz Kaminski photographs much of this film like it's a friggin' Thomas Kinkade painting. Soft, blinding light billows in from every window, like Lady Justice shining her maglite down on Judge Palmer's every move. Kaminski and director David Dobkin try so hard to capture the essence of smalltown America that it becomes actively repulsive. Seeing Vincent D'Onofrio and Robert Duvall bathed in an unnaturally thick halo of light, you get the sense that nobody behind the camera has the faintest clue what they're doing. They're making a courtroom drama, sure, but do they know why? Do they have any clue how trite their story is, or are they so far into things that the only way out is to soldier through? These are some more of those questions I was talking about earlier. Life is too short to wonder how a film as aggressively flat as The Judge ever gets made.

MINORITY REPORT: HEY BOSS! What if we had Hank meet Vinny in a post-credits scene? They could start a firm together in the city. Then we can finally launch our Big City Law universe!

Speaking of seeing oneself out, this is the final edition of Something Awful's Current Releases. For more of the CR crew and their semi-straightforward opinions, join them over at Front Row Central!