It's October, and you know what that means: Vampire Season. This year's Mandatory Vampire Thing takes the form of Dracula Untold, a Dracula origin story so ripe with potential that Universal decided to staple it on top of their upcoming Marvel-style Monster Universe. And speaking of all things Marvel-adjacent, Robert Downey Jr. works out all of his daddy issues this week in The Judge, a seventeen-hour melodrama about family, the law, smalltown America, and then some more stuff about family. Supposedly, Alexander and the Terrible Horrible No-Good Very Bad Day also has a movie out this week, but we're not entirely sure why. Nobody saw it. Actually, that's pretty much the running theme this week. "Why?"

EXPECTATIONS: Harold Gorman, Hollywood Foreman clicked on the space heater underneath his metal desk and pulled out a box of cigars from the top drawer. Kevin, his assistant, sat shivering underneath the window, because Harold claimed that the gas companies were a bunch of price-gouging goddamn con artists.

"Y'know what kids like these days, Kevin?" Harold pondered. "Universes."

"Yeah, you know, universes. Shared universe things. You don't gotta tell a story no more, you just gotta sell a character. Then you make a bunch of other movies about some other characters, and then you do a movie where they meet. But if they want to watch the meet-up movie, they gotta watch all the individual movies firstofall. So here's what I'm thinking. No one likes monster movies anymore, so we take all the old monster movies, and we do reboots, make them all sexier. Then we throw them all together, because reboots are even better than universes." Harold put his feet on his desk, proud of his revelation.

"Actually sir, Universal already had that." Kevin explained carefully. "In the thirties, all of the monsters had their own canon, and they were linked through the Abbott and Costello films, so Dracula, Wolfman, The Mummy, Frankenstein and Bride of Frankenstein, they had the shared universe done 75 years ago. I'm sorry, this isn't an original idea at all."

Harold took a long puff of his cigar, and unbuttoned his collar. "Exactly." He grinned. 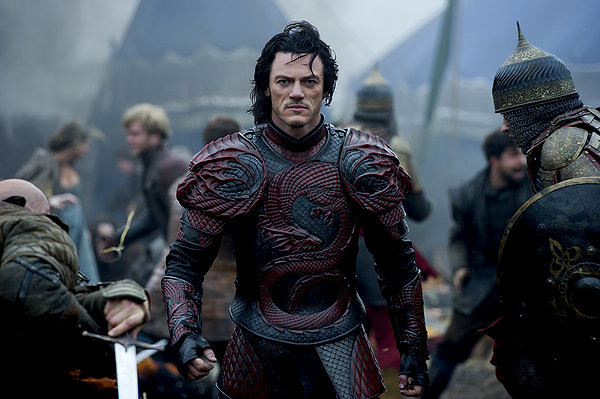 Everyone loves a super guy in a fancy red costume.

REALITY: I walked into this film figuring it had a pretty ridiculous title. The story of Dracula is pretty damn Told. Short of The Bible or Aesop's Fables, I can't think of a lot of stories that have been MORE Told. Dracula has been told as the hero, he's been told Black, he's been told gay, he's been told as whatever the hell Francis Ford Coppola was going for. There aren't many more ways to tell Dracula. Apparently the "Untold" version we're getting here is "Dracula, but from the perspective of a boring, uncharismatic lumber yard of a lead."

Dracula Gets Told tells the story of Vlad "The Impaler" Tepes (Luke Evans), former child slave and legendary warrior who escapes his duties to the Turkish Emprire, and somehow becomes made Prince of Transylvania in what I can only imagine was the least democratic process ever. ("I don't know about you, but I'm voting for the guy that can run wooden stakes through our guts.") When the Turks, led by Sultan Mehmet (Dominic Cooper), return to claim 1000 Transylvanian children for their army, including Vlad's own son, he seeks the counsel of an evil supernatural creature who is imprisoned in a cave in their forest, and the logic behind this doesn't make any more sense in the movie than it does in that sentence. The cave-vampire (Charles Dance) grants Vlad a portion of his abilities as part of a wager, telling Vlad that he will be restored to his mortal form within three days if he can resist the urge to feed on human blood, otherwise the cave-vampire will be released from his cave-prison. We are then treated to a scene where Vlad learns how to use his new powers and control them so he can defeat his former-friend-turned-enemy and... Goddammit, this is a superhero movie, isn't it.

"Gimme back my helmet, dad. It doesn't even match your armor."It's also not a very interesting or entertaining movie, superhero or otherwise. There are a handful of moments (all of which are in the trailer), which show some creativity, 90% of which involve Vlad punching an army with a swarm of CGI bats. But for the most part, we're treated to Vlad cutting through poorly-shot action sequence after poorly-shot action sequence as he battles to protect Castle Greenscreen. Vlad seems to forget his own abilities at random, just as the movie seemingly forgets its own rules and premise. For a movie about a vampire, the whole "thirst for blood" thing sure seems to fade in and out at random, whenever the film feels like it. Vlad can't kiss his wife without wanting to rip out her veins, but he's apparently okay with his dying friend splashing blood all over his shoes. The final battle even climaxes with Vlad just meeting Mehmet in a straightforward swordfight, making you wonder why the whole "deal with the cave-vampire" thing was even necessary. Vlad of course uses his abilities to get out of trouble and win the fight at the last possible second, and this is lazy writing of the worst caliber. Unless your hero is wearing a big red Kryptonian "S" on their chest, then it is a total cop-out to just have them win a fight by deciding suddenly to try harder.

The visuals in this film are as bland as its subject matter. When you make a vampire movie, you are forced to put most of your action in the dark for obvious reasons, but that doesn't mean that you have to just run a grey-blue filter over everything and call it good. You'd imagine that a film about a man struggling to control the internal forces of light and dark could possibly do something interesting with its lighting, but instead director Gary Shore follows the Twilight rule that all vampires should be followed by a haze of Pacific-Northwest overcast, which is about the least interesting way you could take this idea. (It also makes Dominic Cooper's evil spray-on tan stand out in a blatant and eyebrow-raising manner.) I was excited by the idea of a Universal Monster reboot, but this does not bode well for the future of this project. There's no creativity involved in making these characters into angsty tortured anti-heroes like... Like Batman. It's Batman. Dracula is a literal and figurative Bat-Man. Oh, fuck you, movie.

MINORITY REPORT: This wasn't even supposed to be a part of all that shared universe malarky. They mapped out their whole plan a month ago, and then some intern burst in screaming, "HEY GUYS, I JUST REMEMBERED..." - Joseph "Jay Dub" Wade