A Back-up Plan of My Own

EXPECTATIONS: Another romance movie - and this one has Jennifer Lopez in it?! Oh screw that! After Remember Me and The Bounty Hunter I can't just go it alone anymore. I've got a back-up plan of my own this time! If I'm gonna do this thing, I'm gonna do it loaded on every controlled substance I can get a hold of!

REALITY: I was somewhere between the trailers for Eat Pray Love and Sex in the City 2 when the drugs began to take hold. The assignment: The Back-up Plan, a romantic comedy starring Jennifer Lopez as Zoe, a pet shop owner who has given up on her search for Mr. Right and has gone the route of artificial insemination, using donated sperm in order to have a child. However, things quickly go awry when Stan (Alex O'Loughlin) enters her life and gradually sweeps her off her feet. The two quickly bond as a couple and before too long they find themselves running a gauntlet of mood swings, surprising revelations, bodily transformations and quirky characters in their quest to learn a valuable lesson about love and commitment. While The Back-up Plan was better than the other two romance pictures I've seen this year, it still wound up being a limp excuse for a film. In fact, it struggles to be barely underwhelming. This was quite a shame, because I really could have used something to distract me from the ants that were crawling underneath my skin the whole time. 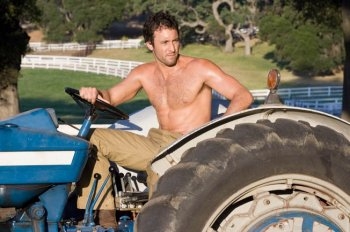 Tractors are romantic, right?The Back-up Plan feels less like a genuine full length movie and more like some sort of Lifetime Channel original film with slightly higher production values and a few naughty words that you couldn't get away with on television. This wasn't much of a surprise to me, seeing as how this picture was released by CBS Films, whose previous release Extraordinary Measures also had a strong "made-for-television" feel to it. Everyone feels like a character that was borrowed from a sitcom - thoughtless and two-dimensional, their only skills being the ability to emote on response (and not very convincingly, either). Characters react with that canned emotion quality normally reserved for daytime soap operas, and their reasons for their behavior at times feel unrealistic. I also had a particularly bad experience trying to figure out why Alex O'Loughlin seemed so familiar to me. As soon as I remembered that I last saw him on season six of The Shield, I found myself surrounded by a mob of Vic Mackeys, who proceeded to whoop on my ass. Thankfully I was jolted out of this bad trip when the usher approached me and told me that I would be ejected from the theater if I didn't put my clothes back on and stop screaming. 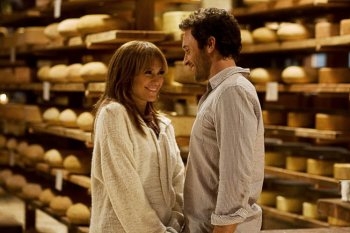 Bread and cheese are kind of romantic, I guess.As a couple, I guess Zoe and Stan are okay. They're certainly far less obnoxious than the ones I've seen in recent films, but I still find myself irked at how convenient everything is for their pretty little selves. The Backup Plan seems like it wants to have a sincere discussion about romance and dedication, but I kept finding myself jolted back to reality when I asked myself nagging questions like "Why is a woman as hot as Jennifer Lopez unable to find a man?" or "How likely is it that she'll meet her Mr. Right only minutes after leaving the clinic to get her artificial insemination done?" and "Why am I hovering ten feet over the audience?"

The two of them also seem to have a difficult time behaving like a real couple. During one scene Zoe gets mad at Stan when he says Zoe's kids "aren't his" in an effort to explain the nature of her pregnancy, which causes Zoe to fly off the handle and think that Stan isn't committed to fatherhood, despite the fact that he's spent half of the movie taking care of her, giving up his life of bachelorhood and dealing with her whiny bullshit. In fact, during the course of the film the two of them break up and get back together about three times. Seeing as how this was all in the course of nine months, I'd imagine this can only be a sign of worse things to come in the long run for them. While we're on the subject, even New York City, which is where the film takes place, seems fake. It's just far too clean and neat with its ridiculously upscale farmer markets, not to mention the singing flowers and mystical fire-breathing dragons.

The Backup Plan also struggles as a comedy. The humor is stale, and it's delivered poorly. All that was missing was maybe a laugh track. Zoe's eccentric friends at the single mothers support group don't really seem eccentric enough to be funny, Zoe's grandmother (Linda Lavin) tries in vain to generate laughs by saying the word "douchebag," and there's this annoying recurring gag with Zoe's tiny pet dog that growls at Stan every time he's around. The bit wasn't funny the first time they did it, so they tried it about six more times throughout the film's 106-minute running time to see if they could get it right (they never did). It is also later revealed that the dog came from a puppy mill and, as a result of its health problems, gets around using a pair of colorfully-decorated wheels attached to its hind legs. Animal cruelty is hilarious.

The only genuine laughs in the film come from the two brief scenes in which Anthony Anderson's character, a father of three, dispenses advice on raising children to Stan's character. The man's no John Cleese, but he's good enough to make the film bearable for his brief on-screen appearance. I was taken aback, however, at one particularly misplaced sequence in which Anderson bludgeons a random person to death on the street, drags his body into an alleyway, cuts open his chest and feasts on his lungs. Though, to be fair, that may have been something that I did after the PCP kicked in, and I just projected it onto the film. 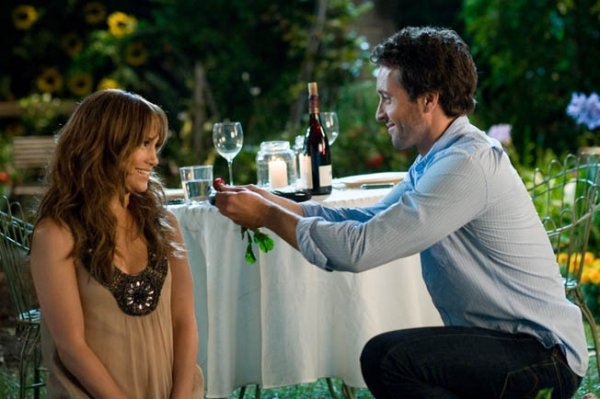 What the hell is that, a radish? I don't think radishes are romantic.

Aside from the comic stylings of Anthony Anderson and the fact that Jennifer Lopez still looks pretty hot, there isn't much to say about The Backup Plan. It's a mostly boring and unimpressive affair with no real standout moments to distinguish it from every other dreadful romantic comedy that gets churned out every year. I will admit, however, I enjoyed the part where a huge zipper appeared on the screen and, after having opened it, I was transported into another dimension full of colors and sounds that I had never experienced before. My ego slowly disintegrated and I then I was greeted by God in the form of my spirit animal, a coyote, who told me that all life in the universe was one. It was one of the most meaningful experiences of my entire life.

Then that fucking tiny dog growled again. What a buzzkill.

MINORITY REPORT: By jove, yes! Now you and I are communicated amicably, Seeders old boy! It's like you've peered into my own life for just a fleeting moment. Now you know the pleasures and the horrors of being completely and utterly sane!. -Montague "Legally Sane" Smythe