This Is the End

EXPECTATIONS: I have been cautiously optimistic about this one for a few months. Something tells me there has to be more to this film than the trailers are letting on. I know the popular thing to do is to act completely "over" these guys and say how overexposed they are, but I really don't feel that way. This is a group of actors that appears together often, yes, but that's how Hollywood has always worked. You find chemistry in a troupe and you work with it. All these guys have been prolific in their own projects over the years, and I've enjoyed more of their combined output than not. Though I guess 'these dudes hit over 50% of the time!' isn't the most inspiring rallying cry.


REALITY: There's a lot of density to this film, so much that I'm not even really sure I can handle it. It is this year's Killer Joe, without most of the stuff I loved about Killer Joe. It is a challenging, thought-provoking movie aimed at an audience that doesn't go to the movies to be challenged or to think, and therein lies the issue. 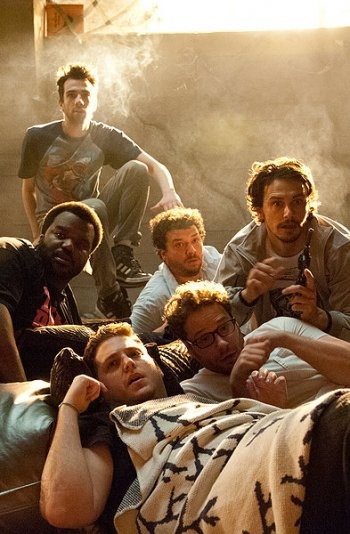 Haha, they're all getting stoned.... BUT THEY'RE PLAYING THEMSELVES!

This Is The End follows hyper-fictionalized versions of Jay Baruchel and Seth Rogen as they hang out, smoke weed, and go to a party at James Franco's house, where we are treated to a series of famous-people-doing-the-opposite-of-what-they're-known-for cameos, except for Kevin Hart, who acts basically exactly how you'd expect Kevin Hart to act. Highlights include Jason Segel complaining about how much he hates sitcoms, and a coked-out Michael Cera getting punched in the face by Rihanna.


Halfway through the party, though, the world goes to hell, literally. The actual biblical apocalypse happens, and many of our most semi-beloved celebrities fall into a blazing sinkhole. Baruchel, Rogen, and Franco, along with Jonah Hill, Danny McBride, and Craig Robinson, hole themselves up in Franco's mansion and try to figure out what to do next.

Let's be clear here: These guys know exactly what they're doing with each moment of the film. Or at least they know what they're trying to do. The film starts with Rogen shuffling past a cameraman who asks why he plays "the same dude in every movie." Baruchel's comparatively slight career and recognizability relative to the others is addressed in the form of a growing distance in his and Rogen's friendship. (The whole film is based on a short the two of them made together in 2007.)


Everyone in this movie is playing a version of the persona that he knows the public sees him as, including McBride as the horrible human being he always tends to play, and James Franco basically playing the James Franco you see in this article. They know exactly how the public sees them, as amusing douchebags, and they play to that, and they do it very well. There's even a brilliant bit where two of the guys playing themselves in the million-dollar blockbuster can't remember the meaning of the word "hubris." They're not subtle.

Once you've established this level of self-awareness, you leave yourself open for even greater scrutiny, and the film suffers from that. Rogen and his writing partner Evan Goldberg are first-time directors, and it shows. Tone-wise, the movie is all over the place: It can't decide how dark it wants to be, and it can't figure out what points it wants to make. Between the inherent self-loathing, the religious imagery, the Superbad-style gay overtones and the sexual hatred (more on that later), there's just too much for them to handle, and none of it is managed particularly well. This is a cinematic Pillsbury Grands Biscuit: It has many layers, but they're all just shallow and white-bread.

There's also the fact that this movie is supposed to be a comedy, so we need to solve the very pressing issue of "Is it funny?" The answer is "Yes, buttttt...." The middle act is basically a series of sketches staged in Franco's house, so there's a lot of meandering, probably improvised filler. Some of it is funny, but much of it drags on for too long. We get a semi-sequel to Pineapple Express out of it, which is nice. So yes, you will probably laugh, but nothing sticks out as particularly uproarious.

This Is The End brings up a point that needs to be addressed, and it's never an easy one to talk about, so let's leap right in: At one point in this film, Jonah Hill is raped by a demon on screen. It's a short scene, but it's shot in a legitimately disturbing fashion. It borrows heavily from other female-rape scenes in film, as well as the style of actual horror films, most notably Rosemary's Baby, including the "This isn't a dream! It's really happening!" line, with touches of Paranormal Activity. (Which makes sense, because there's paranormal-sexual-assault subtext in those movies.)


There are so many interesting things about this idea that aren't handled properly. Essentially, an out-of-place graphic sexual-assault scene is played for laughs because the victim is a man. The film also spends most of its time feminizing Hill, making him play the "sensitive" one and having him affect limp-wristed gestures and a gay lisp at every opportunity. In fact, the rape is also a setup for a funny yet ill-advised exorcism sequence, in which Jonah Hill becomes the literal manifestation of the flaming-homosexual stereotype. Like, he's on fire. 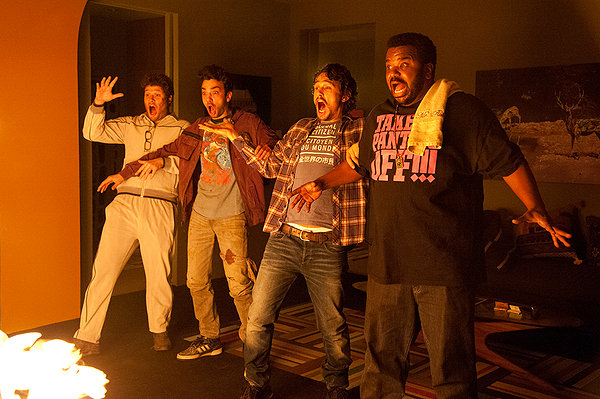 Everyone recoils in horror at the off screen thing. I bet it's terrifying.

By contrast, the best sequence in the film unfolds when Emma Watson shows up at the house and Jay points out that it is important the group of men makes her feel safe, like she won't be raped. The rest of them gang up on Jay because it never occurred to them that she might feel threatened. Of course, Watson overhears them, believes they ARE discussing raping her, and comes at them with an axe. She literally chops a giant penis in half. Again, it's not subtle.

The problem with the Jonah Hill rape scene, though, is that the rape is the joke. I realize that it is a reference to a famous religious-horror film, but there's no deeper level beyond "Take that, and make it so a man got raped." This is dangerously close to Seltzerberg-level referential humor. (Editor's Note: Speaking of which, the man-raped-by-paranormal-entity sequence played out pretty much the same way in A Haunted House, right down to the sheepish follow-up confessional.)


If you go back through these guys history, you'll see that Franco and McBride have a history of trivializing rape. (Rogen does this as well in Observe and Report, but at least there the point is to show his character as a reprehensible person.) This is a problem not just in this film, but in most media. As a non-rape-victim - which, I'm assuming, this cast members are as well - I do not have have the mental capacity to understand how demoralizing this is. The fact that I can analyze it from a cinematic perspective is evidence of this. What's worse is that the Watson scene proves they're aware of what they're doing. That's the point of the scene. There's even a giant sign above James Franco's bed reading "NO UNLAWFUL SEX." This is a film made by people who are smart enough to know exactly what they are doing, and yet not smart enough to not do it.

This Is The End is evidence that sometimes studio interference can be a good thing, because there could have been a great film here, had someone taken the reins and given it some sense of direction. As is, at least it does a much better job with the Kevin Smith formula of "Get high and make a movie with your friends" than the actual movie Seth Rogen made with Kevin Smith.


I mildly enjoyed most of it, but that's not saying much. The good moments outweigh the bad, but the bad are still plenty bad. The jokes it nails are not enough to make up for the jokes it murders, which means ultimately I can't recommend it in good conscience, Movie of the Week be damned.

MINORITY REPORT: I've been using a banner that says "NO ___AWFUL SEX" as a blanket for years. I suppose it still means the same thing. - Donovan "Future Critic" Laird