As Cool as I Am

EXPECTATIONS: There isn't a single moment in the trailer for As Cool As I Am that doesn't scream "Adapted from a rejected ABC Family soap-opera pilot." I'm going to keep my mind open, though, because James Marsden and Claire Danes can be great in the right roles. That said, I'm not so sure they've found them here.

REALITY: Every year, dozens of films are made about the difficulties of adolescence and the trials of growing up. And every year, at least one of those films seems like it was randomly generated by a defective supercomputer. Characters routinely contradict themselves from scene to scene; plot threads spin wildly at a moment's notice; life lessons go seemingly unheeded. This year, that film is As Cool As I Am, a ridiculous melodrama that's as structurally atonal as it is emotionally illiterate.

Lucy Diamond (Sarah Bolger) is a precocious teenager whose family is (stop me if you've heard this one before) anything but normal. Her father (James Marsden) is a lumberjack who spends months at a time away from his family, and her mother (Claire Danes) is a stay-at-home mom struggling to keep her job as a telemarketer a secret. Lucy and her best friend Kenny (Thomas Mann) accidentally fall in love when the two stumble into a sexual relationship. Will these precious snowflakes be allowed to pursue the lives they want, exactly the way they want them?


No, of course not. The outside world threatens to shatter this fragile bubble with a litany of plot complications that crops up out of nowhere, as though the film is constantly stopping to explain things it forgot to tell us twenty minutes ago. On the first day of school, we learn that smart outcast Lucy is the object of a number of jocks' affection. Kenny's dad, heretofore unheard of, turns out to be a recovering drug addict who lives halfway across the state and demands custody rights. Lucy's mom abruptly reveals that her other high school sweetheart, also unheard of at this point, is the owner of a restaurant with which Lucy is inexplicably familiar. 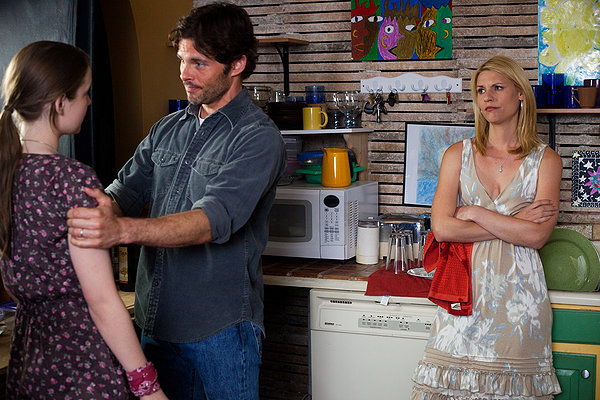 Ah, now THIS is entertainment.

Instead of establishing the world in which these characters live with details and backstory, things that would help the twists and turns feel natural, the film treats all of these revelations as drama bombs. Lucy reacts to each one by vomiting as many exasperated quips as she can muster. On the one hand, this is somewhat realistic. People don't walk around dropping subtle hints about their pasts, knowing the full story will come out sooner or later. People keep secrets; there are things all of us would rather leave unsaid until it's appropriate. On the other hand, movies are not real life. Movies have 90 minutes to convey a cohesive story, and every time we're blindsided by another strange plot turn, we become even more exasperated than Lucy.

The blame for all this madness lands squarely on Virginia Korus Spragg's screenplay. Adapting Pete Fromm's novel, Spragg plays all of the film's cards in the first act. Lucy and Kenny's budding relationship is juxtaposed with the strained relationship between Lucy's parents; other male suitors enter the mix; and, well, that's pretty much the film's entire gameplan. As Cool As I Am briefly explores Lucy's encounters with sexual experimentation, drunken high school parties and date rape, but once we see her deal with these the way any rational adult would, their impact on the film is startlingly negligible. Max Mayer (who directed the underrated Adam) does the film no favors, either, by seeming to sweep these arcs under the rug.

The members of the Diamond family clearly have nothing to say to each other, despite each one being written as a talkative oddball who simply refuses to shut up. When Lucy isn't discussing the finer points of Mario Batali's cooking with no one in particular, she's spewing snark like it's going out of style. Her father, raised in a Catholic orphanage, has a graphic anecdote about one of the saints for every occasion. And in between saintly stories, his colorful language includes obviously made-up swears like "bitchtarded assholian" and "shitdickulous." Whoever Spragg or Fromm consulted to find out how regular people talk was clearly playing a prank on them.

It occurs to me that the longer I talk about this film, the less I understand what it's all supposed to be about. Lucy is, by far, the most well-adjusted character in the film, which makes her growth and stability puzzling in comparison to every other character. We're meant to sympathize with Lucy, but instead her story turns out to be the film's least interesting. I'd rather follow her mother's adulterous escapades at the telemarketing firm, or her father's insistence on abandoning the family for work every time something dramatic happens. At least then we'd have some unique conflicts to explore.

In fact, too much of this film comes across as puzzling. Why exactly does Lucy's father object to the idea of his wife having a job? Why would Lucy willingly associate with anyone complicit in a rape incident? Who let Peter Fonda wander onto the set in the final scene? These questions only scratch the surface of my confusion at As Cool As I Am. It's as though they wanted to horn in on the niche occupied by Girls, without understanding why or how that show connects with its viewers.

MINORITY REPORT: Huh? What? Oh, I'm sorry. I must have nodded off. This film just looks and sounds interminably dull. Is there any worse thing for a film to be than just plain dull? - Ian "Professor Clumsy" Maddison