Feel sorry for poor Joseph "Jay Dub" Wade, for this weekend he has suffered for you. He has developed a deep, unrelenting pain in his brain. causing dizziness, nausea and suicidal impulses. This pain is named Marmaduke.

There is no cure for Marmaduke.

EXPECTATIONS: Expectations? You mean I'm supposed to expect something from a movie based on a 50-year-old "Gee, that's a big damn dog!" joke? Alright: I expect it to be so bad that I will have chewed off two limbs and died of shock before the third reel. Anything less than terrible would be false advertising, and I simply won't stand for it.

REALITY: Okay, so I'm still here, but good God was it a tooth-and-nail struggle. If the thought of a talking dog waxing poetic about the joys of peeing is your -- or your kids' -- idea of comedy, then have I got the movie for you! 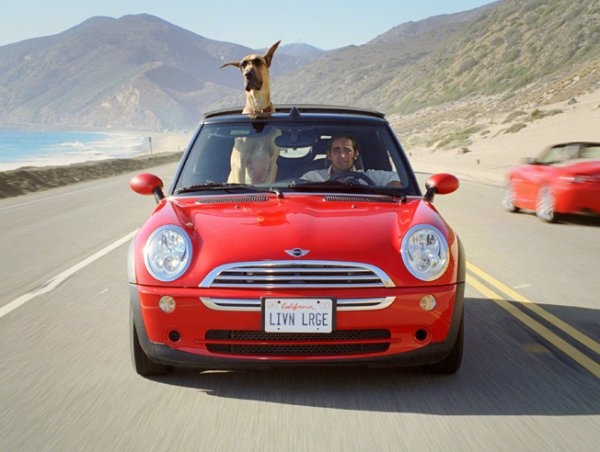 Just pray for a low bridge.

The Marmaduke movie represents more thought than anyone's invested into the character in more than half a century. To put that into perspective, Owen Wilson wasn't even born the last time someone wrote an original Marmaduke joke, and even then artist Brad Anderson claims he stole most of his ideas from old Laurel and Hardy bits. It's too bad director Tom Dey (of Failure to Launch fame) ignored even THAT impulse, because Marmaduke is the same fart joke told over and over again for eighty-seven of the longest minutes of my life.

To make up for the lack of humor, the movie takes a different approach in its attempt to murder my poor, helpless brain cells. Marmaduke tells the tale of a happy-go-lucky teenager forced to leave Kansas for the free-wheeling, fast-paced beach lifestyle of Southern California, where this plucky youngster has to learn about cliques and individuality and all that crap, before ultimately realizing that the weird kids are just as unique as the cool, popular kids. Now replace that sexy young teenager with America's ugliest dog (voiced by Owen Wilson). That's Marmaduke. It is literally Mean Girls, but about dogs. I wish I was kidding.

If you think about it, though, that's actually a pretty shrewd strategy. Let's say you're a movie producer and you want to make a movie teaching youngsters about all the trappings of high school that they'll someday have to face. Now let's say you're smart enough to realize that the kindergarten crowd really doesn't give two shits about high school. How do you get away with telling that story while keeping the little bastards giggling? It's simple!

1) Find the nearest newspaper and turn it to the Funny Pages. Close your eyes and drop a pile of cash. Buy the rights to whatever the money lands on and green-light the shit out of it!

2) Set aside half your budget for casting and music licensing. Now waste half of that on hiring a bunch of moderately famous people; two A-listers -- in this case Owen Wilson and Kiefer Sutherland -- and as many up-and-comers as you can round up. Also, cast that McLovin guy. Children love him, right? Then, take the leftover money and license a bunch of mid-'90s pop and hip-hop tunes. Don't worry too much about the whos and the whats of this step, the kids won't recognize it anyway. If mom and dad can jam out to "California Love" for thirty seconds, it'll all be worth it.

4) Milk the resulting cash cow for every penny it's worth. Repeat as necessary ad infinitum.

Congratulations on your very own comic strip adaptation! 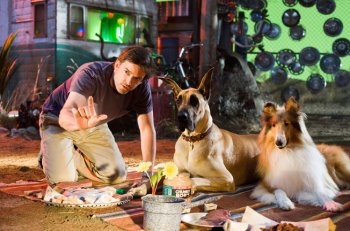 Stop trying to explain things to dogs.Honestly, though, Marmaduke is a kids' movie that raises a number of questions that us grown people need to seriously consider, or at least occupy ourselves with during the rest of the movie. For example, why are teacup chihuahuas represented as Hispanic day-workers hired to occupy the handbags of snooty teenage girls? This is a gag that's brought up briefly, and only once, but it made me wonder why none of the other animals were stereotyped into a profession. Okay, granted, this is a kids' movie about a dog that pees on everything, not Animal Farm. Not every dog or cat needs to represent an entire race of people. Still, it couldn't have hurt ...

Now, of all the actors hired to make this mess, three stand out. First, there's Christopher Mintz-Plasse, who voices a paranoid, hairless dog. So far this year I've seen/heard this kid in three movies, and he's got the vocal range of a broken squeaky toy. Hide him all you want, Fox, but we can hear McLovin a mile away. Then there's TV's Lee Pace, who plays Marmaduke's owner, Phil. Pace comes out of this film looking like the next John Ritter, and I mean that in the best way possible. He's the only one in the movie who actually appears to give a shit, and even when he's acting opposite a farting cartoon, you can tell he's honestly trying.

Finally, the third actor of note is Tom "Stop calling me Biff, goddammit" Wilson. Despite not being listed in either the closing credits or the IMDb listing, Wilson is credited with having voiced some unnamed character in the film pretty much everywhere else. I probably wouldn't have recognized his voice anyway, but it seems strange to me that he's not credited in the closing crawl. It's like someone made that up and then the lie went viral.

Wait ... is Tom Wilson planting false information about his acting career on the Internet? It's okay, Tom. We all want you back in the movies, too, but going around telling everyone you were in Marmaduke is not the way to do it. In fact, that's probably why they've stopped inviting you to parties. If I were you, I'd disassociate myself with everyone involved in this movie. Yes, even William H. Macy. Burn all the clothes you've worn while claiming to have taken part in Marmaduke, and start a fresh career, or at least wait until someone starts casting for the Hagar the Horrible movie.