A week after enduring Marmaduke, Joseph "Jay Dub" Wade gets to experience the almost-certainly-better movie The A-Team. Hopefully it doesn't turn out to be terrible, too, because I'm certainly not paying for the therapy again.

EXPECTATIONS: The original A-Team television show was just a wee bit before my time. I know the characters, catchphrases and theme song all too well, but that's about it. Everything I know about The A-Team I learned from other TV shows making fun of it. All I really expect out of this movie, then, is for it to deliver on the promise made by the film's thoroughly bad-ass trailers. Judging from the so-called "blockbusters" we've seen in recent weeks, though, maybe I shouldn't get my hopes up too high.

REALITY: Either Marmaduke ate away more brain cells than I thought it did, or The A-Team was the most fun I've had with a summer action movie in years. While the first statement can't be ruled out just yet (the test results are still pending), that second part is definitely true. The A-Team is an absolute blast from start to finish. It's at times incredibly shallow and incomprehensible, but it's a blast nonetheless. 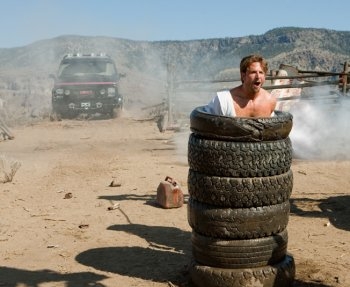 Stag night pranks are getting crazier every day.Like all big-budget franchise movies these days, The A-Team is a prequel of sorts, beginning before The A-Team ever became The A-Team. We first meet Col. Hannibal Smith (Liam Neeson) on his way to rescue 'Faceman' Peck (Bradley Cooper) from some shady types in Mexico. En route, Smith hijacks the van of one B.A. Baracus (Quinton Jackson), and the trio escapes to the USA with the help of certified crazy person H. M. Murdock (Sharlto Copley). Fast forward eight years, and our gang is now a unit stationed in Iraq. There, the A-Team is informed that Iraqi insurgents are in possession of fake minting plates with which they might start printing their own US currency. The CIA (Patrick Wilson) asks the A-Team to intercept the plates, while the Department of Defense (Jessica Biel) warns them not to. Sure enough, the team gets the plates, but soon all four receive court-martials for their trouble. The rest of the film follows the A-Team as they escape prison, track down the stolen plates and attempt to clear their names.

Of course, the minting plates are nothing more than a MacGuffin, an object that's not especially important to the story other than the fact that everyone wants it. I've seen movies use a briefcase full of money as a MacGuffin before, but I've never seen a movie in which the object of everyone's desire is an implement for making more MacGuffins. That's kinda like having a factory that manufactures plot devices. I imagine somewhere out there is a Colombian drug lord waiting for his plates to arrive so he can fill a briefcase full of fake money and send his MacGuffin out on its own personal little adventure of international intrigue and espionage and whatnot. 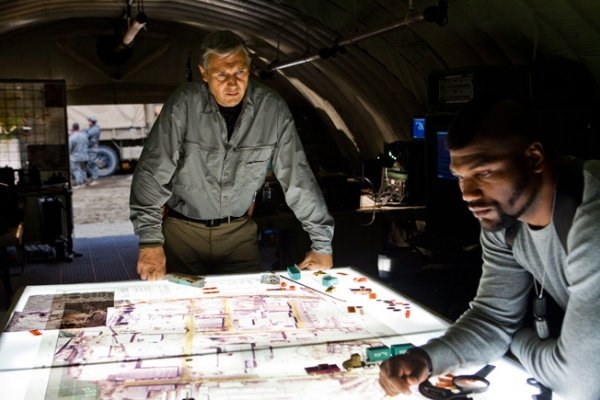 A plan comes together...

Anyway, after a drawn-out (but nonetheless balls-out insane) opening segment, the film settles into a groove that can best be described as an episode of 24 in which time isn't such a factor. You've got your two factions attempting to outfox one another, while every so often the A-Team tries to gum up the works because it's the only fun they get to have now that they're convicts. It can get a bit confusing at times, especially with the occasional shaky-cam-fueled shootout, but for the most part the final hour is your typical PG-13 action picture constantly being invaded by the four coolest dudes on the planet. 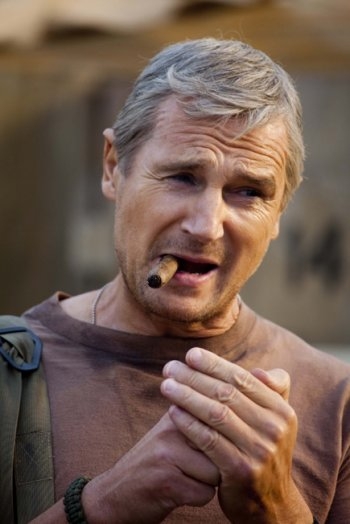 ...and this guy fucking loves it!What sets The A-Team apart from the rest of this summer's cannon fodder are the two crucial elements it has going for it. First, there's the cast. Each of the four leads are well aware that they're starring in a comedy, and they play their parts just short of becoming out-and-out caricatures. Liam Neeson preaches the Gospel According to Having a Plan, Bradley Cooper plays Bradley Cooper, "Rampage" Jackson does a pretty good Mr. T, and Sharlto Copley plays Murdock more or less like Daffy Duck. Copley speaks in three or four different accents simultaneously, and he sometimes falls into and out of his native South African accent mid-sentence. I can't tell if he's doing it on purpose or not, but it's hilarious either way. The team shares an excellent chemistry together, and while those four are having way too much fun bouncing one-liners off one another, the rest of the cast is forced to play it completely straight. In fact, if I have any complaint with the movie, it's that. Making all your heroes the wacky comic relief means that the villain ultimately ends up being the straight man, eating up screen time just for the sake of having a villain.

The other element making The A-Team stand head and shoulders above like-minded action crap is director Joe Carnahan. This is his third film tinkering with the ins and outs of law enforcement in some way, shape or form (see also: cop drama Narc and the deliriously weird Smokin' Aces). It's obvious the guy has a good eye for action, as he pulls off three or four fantastic action set-pieces, the kind that Iron Man 2 forgot to deliver. The gunplay is fun and engaging, and that's all well and good, but any scene in which Murdock pilots anything is just golden. This movie does with aircraft what Shoot 'Em Up did with firearms.

The action is ludicrous to the point of becoming silly, but it always manages to keep you laughing and cheering, not because it's stupid, but because it's stupid and you want to see more. The A-Team knows exactly what kind of movie it is and exactly the audience it's playing to. It's the summer action movie I've been waiting for, and I hope you'll give it a chance in the coming weeks. If this movie is a hit, and I think it will be, a sequel can only get crazier. In the sequel, I fully expect to see Murdock turn a pair of fire extinguishers into a jet-pack and then fly it around the White House. Come on, people! Let's make it happen!

I'd scream from the mountaintops how good The A-Team is if people actually listened to idiots screaming from mountaintops. Hell, I'd personally sky-dive over every major city in America while holding a banner that read "The A-Team is bad-ass!" if I thought it would help the movie's chances. Because that plan will probably never come together, all I can do is assure you that the movie is one hell of a fun ride. It's tailor-made for audiences who want some old-fashioned summer escapism without all the baggage that comes with a 'serious' action movie. While you won't leave the theater pondering the thematic implications of Hannibal's smoking habits (though now that I think about it ...), I can pretty much guarantee you'll leave with a big stupid grin on your face while humming the theme song. Sometimes, that's enough.

MINORITY REPORT: If I connect these toilet-roll tubes to this mouldy banana peel and then insert them into this egg carton, I do believe I have made a land-mine! Now to wait for the police to wander casually up the driveway and watch them blow sky high! Thank you, The A-Team; you have inspired me once again. -Montague "Legally Sane" Smythe