Prince of Persia: The Sands of Time

This week's slightly belated Current Releases column sees Ian "ProfessorClumsy" Maddison mashing his jump button manically as he attempts to make it through Prince of Persia: The Sands of Time alive.

EXPECTATIONS: Video-game-to-movie adaptations don't have a very good track record, and I'm saying this as one of the few critics who enjoyed Doom. My knowledge of the Prince of Persia franchise stems from one single game, in which a white-clad prince would jump and climb into increasingly hideous deaths only to be re-incarnated again and again, all in the hopes of rescuing a princess from a death curse in less than one hour. That sounds like it might be a damn good watch in cinemas! And short too!

Now, what's all this "Sands of time" nonsense? 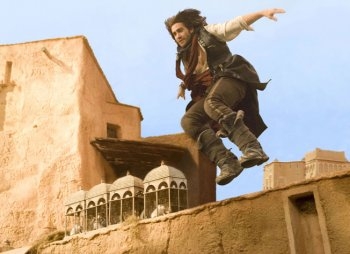 Jump!REALITY: It is the time of the great Persian Empire. The young adopted prince Dastan (Jake Gyllenhaal) and his brothers are all set to invade the city of Alamut in search of Alamution weapons of mass stabbing, only to find that the secret weapon forgeries aren't really there. It was, of course, a conspiracy cooked up by the king's power-hungry brother Nizam (Ben Kingsley). Sounds like an interesting political allegory, doesn't it? Well, it doesn't go much further than that. Once Kingsley is established as the bad guy, it's by-the-numbers adventure fair, as Dastan discovers a dagger that can literally turn back the sands of time, allowing the wielder to undo mistakes or re-attempt tricky jumping puzzles.

Eager to keep the magical dagger of time from falling into Nizam's hands, Dastan teams up with Tamina (Gemma Arterton), the princess of Alamut, on a quest to defeat the final boss and get the coveted 100% ending. They recruit Sheik Amar (Alfred Molina, channeling Harry H. Corbett for some obscure yet undoubtedly brilliant reason), fight some assassins - sorry, Hassansins - and generally run and jump and fight a lot. Just like in a video game!

It's ridiculous. Absolutely ridiculous in every way. And it gets dangerously close to being bloody good fun with it. The problem is, you never care about any of the characters. Not once do any of the "dangerous" situations thrill you, because you know Dastan can win the day, either by turning back time or by jumping a lot. Even when characters die, it feels more like an insult to the audience for thinking that the plot was about to move forward than an actual loss. Oh good, something's about to happen and we can- oh, that guy's dead now. Oh well, next scene! More jumping!

JUUUUUUUUMP!!Let me tell you, if there's one thing I expected from a Prince of Persia movie, it was jumping. A lot of jumping. And to a certain extent, I'm glad it's there. There are times when Gyllenhaal's rooftop-bounding gets pretty entertaining in its own right. But, there's a point at which a lot of jumping becomes a hell of a lot of jumping. Then it becomes a little too much jumping. Then it becomes incessant and slightly irritating. It reached a point where I was glad for any break in the action just to watch Alfred Molina do Harold Steptoe for a little while, or for the always wonderfully entertaining Ben Kingsley to treat us to his dramatic whispering.

The problem with the cast is its leads. Gyllenhaal is one of those actors who I find very hit-and-miss, and here he doesn't do much beyond cranking out a bish-bosh cockney accent and throwing himself into the physical requirements of the role. He's close to charmless here -- not as bad as Sam Worthington, don't get me wrong -- but there's a strange distance to his character that probably stems from issues with the script or even the fact that the source material is a video game. Arterton has a similar problem: Something about the way she speaks is very unnatural here, but she's certainly more interesting in Prince of Persia than she was in the terrible Clash of the Titans.

What really irked me about the main character is he never feels like anything other than a video game protagonist. He establishes what he needs to do in dialogue and then does it, like an establishing cut-scene before an experienced player obliterates a tricky level of a game. There's even a scene in which he flirtatiously states to the princess "You enjoy telling me what to do" and she retorts "It's because you're so good at following orders." In truth, it's because he's a video game character and he has to do what he's told.

It's a shame there's so much wrong with this film, because it gets so close to being quite good. A scene of ostrich racing and Molina's subsequent speech about the suicidal nature of ostriches both had me grinning, and some of Dastan's acrobatics were very well constructed, unlike the script. There was even a point about halfway through at which I was thinking Prince of Persia: The Sands of Time might turn out to be a rip-roaring good time, with a few niggles here and there. Unfortunately, much of the latter half of the second act consists of arbitrary bullshit. Dastan and Tamina take turns telling each other's back story that we don't care about, and Dastan is forced to convince his brothers of Nizam's treachery twice. The film could have been almost an hour shorter without all this pointlessness. 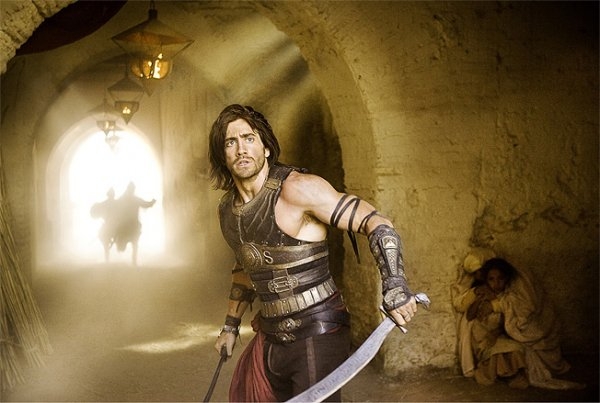 But then you get to the end. The climactic scene and the denouement are an absolute slap in the face to the audience. From stupid CGI theme-park rides to the laziest possible handling of a time-travel element, everything that happens in the last twenty minutes completely negates all that came before it, which left me wondering why I had wasted the past two hours watching it at all. The film could have been almost two hours shorter if they'd been honest with their audience about where they were taking them.

MINORITY REPORT: Ah yes, the computing game. I played the computing game once myself. It featured two vertical lines which represented tennis players or some such and a small square which bounced around and bleeped. Yes, I remember the home in which I played this computing game very well. The carpets were stained red and the young mother and child who had kindly allowed me to play were becoming very dull company (and somewhat pungent at that). I swore that day that I would never play the computing game again, for it brings out the worst sides of people's natures. Except mine. I found it to be quite a mellowing experience. -Montague "Legally Sane" Smythe