EXPECTATIONS: Why don't I like Bradley Cooper? This is an issue that keeps me up at night. He's been pretty great in everything I've ever seen him in. Hell, he held his own against Liam Neeson in Current Releases' beloved The A-Team. So why is it that whenever I see his face, I think "Ugh, that guy?" I'm guessing it has something to do with the fact that he always seems to be wishing he were Matthew McConaughey. This is convenient because this weekend, I really wish I were seeing the McConaughey movie. 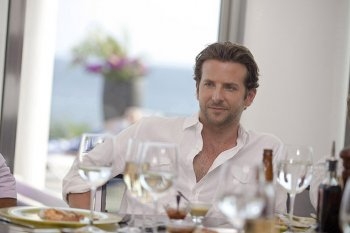 Don't mess with the... wait, wrong movie.REALITY: Let's get this out of the way: This movie is based on a premise that's absolute bullshit. Limitless follows a pitiful Nickelback-singer-looking loser named Eddie Morrow (Cooper) whose life is transformed when his drug-pushing ex-brother-in-law gives him a pill that unlocks the potential of humanity. It accomplishes this by tapping into the 80% of the brain that isn't being utilized while we only access the other 20. This is complete crap. You only use 20% of your brain consciously to think; the rest is devoted to things like breathing, moving, and basically being a living human. It's not like evolution gave you a giant mass of silly putty up there. You can't "fly, man!" by using more of your brain than intended. What you can do by using more of your brain than intended is have a stroke. (Note: I would watch the hell out of a movie where Bradley Cooper takes a pill that makes him have a stroke.)

If I seem like I'm being nit-picky, realize that I'm not docking the film points for having a basis written by that weird guy at the party no one really likes to talk to. I just want it clear that this is the starting point for this cinematic experience. We have to accept that this is the type of universe this movie is set in, and take it from there. It's somewhat fitting that this film has a premise you have to be a gullible idiot to buy, because it then spends a long time insulting the audience's intelligence in various other ways.

After Eddie takes the pill, he finishes his book and begins playing the stock market. He also steals a bag of the pill (called NZT) from the recently-murdered dealer. Then for a very long time, nothing happens. Robert De Niro eventually shows up as Carl Van Loon, an energy CEO who takes special interest in Eddie, but honestly he shows up so late and does so little I forgot he was in this movie. That's right. This movie made me forget De Niro.

Here's the thing: If this film had just let its stars do what they do best, it would have been fascinating. Bradley Cooper makes douchebags likable. It's kind of his thing. But the film's weak script doesn't give him any material to work with, so instead there's literally no reason to root for or against Eddie. He's just kinda there, doing his thing, and telling us all about it in excruciating detail. 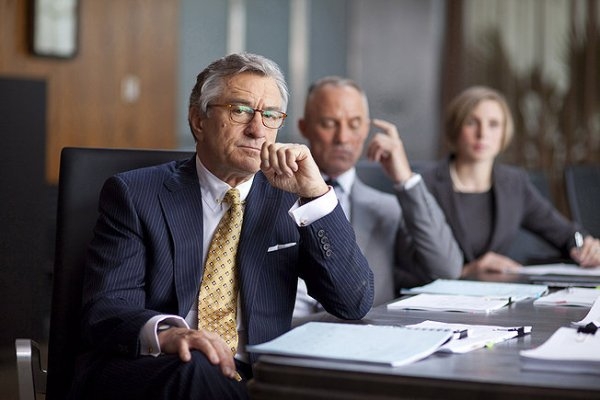 These days, De Niro uses his wealth of acting experience and talent to pretend to be paying attention in meetings.

Ironically, this film about the height of human achievement seems to have been made by a man with a lot of insecurities. Because the script is so flimsy, and because director Neil Burger seems so unsure of his own abilities to communicate ideas on film, we're treated to my new pet peeve of movies: The unnecessary voice-over. Narration is okay at the beginning and end of a film, to set the stage or fill in information necessary to the plot. However, it is not needed to tell us exactly what we see on the screen. At one point, Eddie goes to a door, but doesn't go in. The next line of narration? "I didn't go in." WE KNOW, EDDIE. We're right here, too.

It gets worse. Every twist in the film is explained by Cooper's constant voice-over immediately after it's been revealed. But the twists are practically broadcast at us at least ten minutes before they come into play, so this is just overkill. In addition to that, Burger throws in every student-film camera trick he can come up with, every fish-eye lens or perspective shift he can to create the sense that the audience is on a drug-trip just like Eddie. I can see what he's going for, and occasionally it works -- I particularly like the color shifts whenever a character takes a pill -- but after the fifth or sixth time, it's like someone's using their lenses to compensate for their complete lack of storytelling ability.

There is one glimmer of hope here, and that comes in the last twenty minutes. By the end of the movie, once the story has caught up to Eddie's narration so he can shut the hell up, it becomes very entertaining very fast. The last few scenes contain intense action sequences, dark humor, Bradley Cooper charm, the most creative use of a piano motif I've seen in a long time, and some great back-and-forth between De Niro and Cooper. Neil Burger, you don't have to be scared. You are capable of making interesting things happen. Maybe just stick to shorts from now on?

It's a damn shame Limitless isn't better than it is, because conceptually it has some strong ideas going for it. The film is trying to make a point about overreaching and the human desire for improvement. Hell, the title is even a lie, because Eddie has a limited supply of the drug, but the film goes out of its way to smash that plot point, because it might be interesting. At one point Eddie says "There's no fail-safe for human nature," and we start to think we understand what kind of film this is. Then that's all thrown by the wayside in favor of generic conspiracy-thriller ridiculousness that's not even particularly entertaining. It's clear from the fact that it won't shut up that Limitless has something it wants to say, but just like the stoned philosopher at the party, it has no idea what it's talking about.

MINORITY REPORT: So a guy takes a pill that lets him focus super hard, and then suddenly people want to kill him? Are we sure this movie wasn't manufactured as propaganda by anti-Ritalin lobbyists? - Joseph "Jay Dub" Wade