EXPECTATIONS: I'm holding out high hopes for The Lincoln Lawyer; a great cast (including Matthew McConaughey acting against type) and the promise of a taut, suspenseful legal thriller are enough to get me interested.

REALITY: A refreshingly unpredictable and complicated thriller that never patronises its audience, The Lincoln Lawyer manages to surpass even my lofty expectations. This film explores the idea of stretching morality within the American justice system, leaving petty moralising and preaching at the door. Complicated family relationships and fractured friendships are examined without resolving to uplifting resolutions or sentimentalism, making The Lincoln Lawyer entertaining, believable and exciting at every turn.

Hot-shot defence lawyer Mick Haller (Matthew McConaughey) does business out of the back of his twenty-odd-year-old Lincoln Town Car (hence the title), making friends on the streets and generally being too cool for school. He has a lingering relationship with prosecutor Maggie McPherson (Marisa Tomei), with whom he has a daughter, Hayley. It's all a little complicated, but for all his cool suits and snazzy hairstyles he's barely staying afloat financially, which is why he takes the opportunity for a high-profile case when rich kid Louis Roulet (Ryan Phillippe) is sent down for raping and severely beating a prostitute. Roulet swears he is innocent, but with the help of his private investigator Frank Levin (William H. Macy), Haller finds new evidence that ties Roulet to an earlier case of his, in which the innocent Jesus Martinez (Michael Peña) was sentenced to fifteen years. 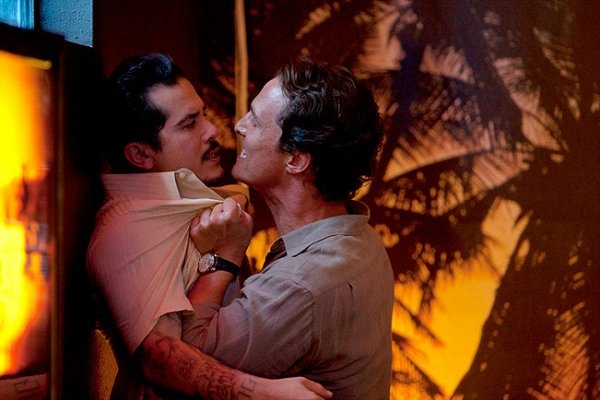 I keep telling you I'm keeping my shirt on in this movie!

What makes the narrative interesting is that Haller is trapped between having to defend a man he knows is guilty in order to protect his family and calling in every favour he can to uncover the truth of the earlier case and acquit Martinez. So, we have the high-powered courtroom drama in which Haller makes prosecutor Ted Minton (Josh Lucas) look like a fool, but there's so much going on under the surface that we fear for him every time he turns his back on his client or enters his own home. It is a testament to McConaughey's performance that we are so invested in a character who is arrogant, fundamentally a bad father and belongs to one of the most demonised professions in American cinema.

This is part of what makes The Lincoln Lawyer so refreshing. All too often, a film will hold a mirror up to a defense attorney of this type and question his moral motivations. Haller has a very solid moral centre and justifies it very succinctly when he tells a parable about a man who murdered his wife but walked free when the D.A. and investigating police officers attempted to pin two other unsolved murders to the man. "It's called the justice system," Haller insists. "It doesn't work that way." Instead of preaching to its audience members about how they should feel, The Lincoln Lawyer embraces moral ambiguity and allows viewers to make their own decisions. This is, after all, how the justice system is supposed to work. 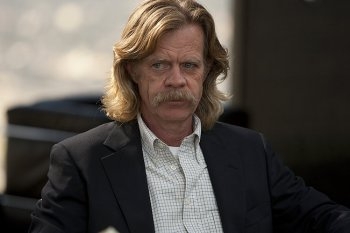 The fuck did you just say about my mustache?Another interesting element here is the way the film depicts Haller's defining relationships; not just with his daughter and her mother, but with his friends and colleagues. Investigator Frank Levin (Macy) and bail bondsman Val Valenzuela (John Leguizamo) take risks for Haller that really don't benefit them; one of them in a rather obvious way, the other in a more ambiguous way. Even though the character in question comes through for Haller, you really get the feeling that there is a rift in their personal and professional relationship that will never heal. You can thank the terrific supporting cast for helping to make this so effective. Everybody knows Marisa Tomei and William H. Macy are great performers, but I've always found John Leguizamo effortlessly compelling. There's something almost cartoonish about Leguizamo's mannerisms. He's not afraid to play even a smaller role like this with outlandish aplomb, only to bring the sudden swells of emotion out in a subtle and surprising way.

There are a couple of elements that don't work so well; for instance, a sub-plot involving a police investigation, with Bryan Cranston as a grizzled old detective, doesn't really go anywhere other than to keep the police as a presence in the film to represent that forced morality of "we catch bad guys, you let them go" to which Haller is so opposed. Also, late in the film there is a revelation that feels like it was designed for the television-addicted housewives in the audience who want a surprise twist at the end of their thrillers. It cheapens the climax somewhat, but it doesn't detract too much from the real denouement or the rest of the narrative.

Ultimately, watching The Lincoln Lawyer may leave one with a sudden desire to walk out of the cinema into the nearest barbershop, get set up with a cool hairstyle, go on to buy a suave suit and some fashionable sunglasses, and then return to the car-park only to have the illusion come crashing back to reality when you are reminded that you drive a shitty old banger. You will never be as cool as Matthew McConaughey. You should come to terms with that now, just as I did.

MINORITY REPORT: Matthew McConaughey is the only person on the planet who isn't a drug dealer that can make doing business out of the back of your car look cool. Score one for the law, I guess. - Joseph "Jay Dub" Wade