Why Did You Do This To Me, Jennifer?

EXPECTATIONS: Anyone who is remotely attuned to pop culture is going to pick up one or two celebrities they inexplicably love, people that they will support and stand by no matter how many bad decisions they make or terrible movies they star in. Britney Spears, Lady Gaga, Tom Sizemore ... all have their supporters somewhere, no matter how bizarre, misogynistic, or heroin-addicted they may be. For me, Jennifer Aniston is one of those celebrities. I don't feel it's her fault that her face is on every tabloid, or that she hasn't been in a good movie since Office Space. I think she still has leading-lady potential, and I maintain that she's still the most talented and attractive of the Friends. I will even reconcile my brain with the fact that she probably had sex with John Mayer. Taking advantage of female celebrities in bad places is practically the man's modus operandi. The Switch seems to be a movie about aging gracefully, and maybe it's a transition to more mature roles for Jennifer.

Seriously, just ... just stop. Just go away. I'm sorry, maybe this isn't my place given that I'm neither a woman nor a professional actor, but when a man tells you he impregnated you seven years ago with sperm you thought belonged to someone else, and is telling you this while the original sperm donor is about to propose, and the kid you thought was his is in the other room, you will probably get angry. You might even raise your voice slightly. The slap is a nice touch, but this is not a time for subtlety. Ms. Aniston, I'm starting to believe you may not be a very good actress.

Perhaps I should back up a bit. (Or not, it doesn't really matter.) The Switch tells the story of a neurotic, negative, incredibly annoying man named Wally (Jason Bateman) who is in love with his best friend Kassie (Aniston) and has the maturity level of a seventh grader with which to deal with it. Seriously, he's the kind of annoying guy who watches When Harry Met Sally and thinks that someday it will all work out, and she'll come around eventually, not realizing that everyone else just finds him creepy as all hell. In short, he's me in high school.

Kassie decides that her biological clock is kicking, and because no man will be in a relationship with her due to her being Jennifer Aniston, she is going to look for a sperm donor and take matters into her own hands. The donor is a professor named Roland (Patrick Wilson), who is never shown as anything but a decent human being, so of course we won't care about him. Kassie's irritatingly quirky best friend (Jullette Lewis) throws her a sperm-entering party, which is not weird-as-all-hell in the slightest, and Wally drunkenly pours Roland's seed down the drain. Thinking fast, Wally donates his own fluids to the cause while masturbating to Diane Sawyer, which is truly the highlight of her distinguished journalism career. Kassie moves away and then back seven years later, for no reason other than to be convenient to the plot, and Wally begins to notice some strange similarities between himself and this hypochondriac, whiny wimp of a kid named Sebastian (Thomas Robinson). Oh boy, horrible, unlikeable people raising a horrible, unlikeable kid! This is an awesome way to spend 120 minutes!

Of course, the truth comes out, seeing as Wally is totally cool with being taken advantage of as free babysitting while Kassie tries out a relationship with Roland. Stunned and heartbroken, Kassie gets a lawyer and the film becomes a courtroom drama attempting to define the exact distinguishing point between sexual assault and flat-out rape. No, I'm just kidding. It's a romantic comedy. Apparently after a few days, Kassie decides she's cool with the most intimate betrayal possible and hooks up with Wally, her rapist, and ditches Roland, who is again, a perfectly nice guy whose only sin in the film is trying to take Sebastian rock climbing, the bastard. 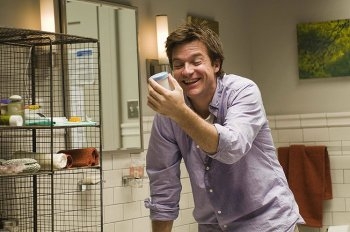 Tee hee, I did an immoral thing.Did I mention that all of this occurs at the slowest rate possible? It's as if the directors seemed to realize that the entire issue could be solved by looking at the damn kid's eye color, so they decided to pad out the opening and "Will he tell" sequences as much as possible, only to give us an incredibly rushed five-minute conclusion. I'm pretty sure Jeff Goldblum is only in this movie because it takes him on average fifteen more seconds to form a sentence than any other human being on earth. Sometimes when I'm bored in films, I will pay extra-close attention to the cinematography, so I can try to have at least one good thing to say about the film. Twenty minutes in, I found myself thinking "Yep, that's one hell of a hallway." It didn't work. (NOTE: That bit about the eyes is not true. Every member of the main cast has blue eyes, whereas Sebastian's are brown. With the exception of a very rare mutated recessive gene, this is impossible. KNOWLEDGE IS POWER, except in casting calls!)

Now that we've covered the abridged version of everything wrong with this film, I'm going to throw a curveball: It gets better. Some scenes actually even border on "pretty good." Bateman develops a real chemistry with the young actor Thomas Robinson, and the characters develop into better people without this transition feeling like a sudden personality shift. Plus, Goldblum acts as though he's barely read the script, and was told to just "Goldblum" at whatever scene he's handed. In a movie with a premise as ridiculous as this one, that works surprisingly well. There's a half-hour in the middle where I actually felt like I was seeing scenes from a movie I would actually want to watch, only to have it come crashing down in the ridiculously understated conclusion, where Jennifer Aniston acts in a fashion most unbecoming of a woman in her position, which is the unique position of a woman who has not had sex with anyone, and yet is still a ho with two baby daddies. 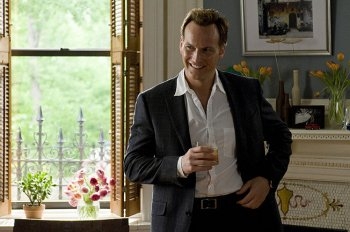 "Hey! Remember me from the most entertaining film of this Summer?"The big reveal scene is completely painful to watch, mainly because the film uses the movie-character method of "leaving out details to make you seem like as big a douchebag as possible." Instead of saying, "Look, I screwed up and came up with the best solution I could at the time," Wally says the line "I hijacked your pregnancy." Gentlemen, when you are confessing your feelings to a woman, never use a sentence involving their uterus and an act of terrorism. At this point, we're not angry with Wally, because we know he's merely an accidental rapist, but Kassie has no way of knowing that. The only thing we're mad about is how much of our time Wally has wasted getting to this moment.

That's right, folks, this movie asks us to root for the man who accidentally stole the sanctity of his best friend's womb, which she was selling off to the lowest bidder, and somehow it works. Except that Kassie doesn't act like what she just heard is that level of bizarre. She reacts with the same lever of anger you have when grandpa tosses down a few too many and starts out with his racist side. This is not an appropriate level of anger. I had a higher anger level upon reading the IMDB plot synopsis for this film. By the end of this, I'm kinda on Wally's side. Her lack of reaction has made me decide Wally's a pretty good guy who makes bad decisions, like jacking off to Diane Sawyer.

At some point in time during this film, Jennifer Aniston must have looked at her script and realized that she is playing a 47-year old. Aniston has hit the strange age in Hollywood where she's too old to be the bombshell in Blockbusters, but too young to play the sexy, sassy Susan Sarandon-type roles. It's a mark of the movie industry's bizarre sense of aging. After all, Drew Barrymore is only five years behind Aniston, and she's still barely above pretending to be twenty-five pretending to be seventeen. Does the fact that the best option available to Aniston is this insanely terrible script show the blatant disregard Hollywood has for the viability, talent, and sexiness of women of a certain age? Yes, it does, but that doesn't change the fact that she sucks in it.

MINORITY REPORT: Did anyone ever have particularly high hopes for Aniston as an actress? Saying that someone is the most talented member of the Friends cast is like saying one turd doesn't stink as much as the others. It may well be true, but they're all still turds and they all still stink. -Ian "ProfessorClumsy" Maddison