EXPECTATIONS: Hollywood just loves adapting the works of Philip K. Dick, usually turning them into something completely different. The closest Dick ever came to being faithfully adapted was Richard Linklater's A Scanner Darkly. Upcoming release Limitless seems to carry more of the essence of Dick than The Adjustment Bureau, which looks more like an understated remake of Dark City. Now stop giggling every time I say Dick.

REALITY: Rather than the disappointing rehash of Dark City or the "Bourne meets Inception" mash-up that the incredibly original guys over at Total Film magazine have promised us, what we have in The Adjustment Bureau is a bizarrely likable romantic comedy/drama/thriller with a unique approach to the intricacies of divine intervention. It's not perfect, by any means, and it gets very mawkish and sentimental before the end, but it certainly works well enough. 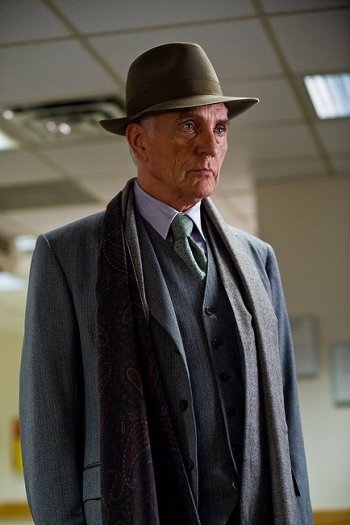 Being in Superman 2 will only get you so far with the kids these day.Congressman David Norris (Matt Damon) has just lost his senatorial election campaign due to some surprising media coverage of a long-forgotten college prank. While preparing his loser's speech, David meets Elise (Emily Blunt) and falls for her almost immediately, inspired by her frankness and authenticity. By chance, David meets Elise again the next day and gets her phone number, only to find that that wasn't part of the plan. You see, there's a grand plan for everything and it's up to the members of the titular adjustment bureau to ensure that we all stick to that plan. Agents Harry Mitchell (Anthony Mackie), Richardson (John Slattery) and Thompson a.k.a. "The Hammer" (Terence Stamp) are taking a particular interest in the case of David and Elise; seems there was a little mix-up with some earlier drafts of the ineffable plan and they're doing everything they can to keep these two apart.

There are really two selling points here, the biggest being the chemistry between Matt Damon and Emily Blunt. You really root for these two to get together, which is a relief when you consider that the entire film hinges on that fact.

The second selling point is the bureau itself. I love the idea of divine intervention being carried out by hard-working field operatives for whom the grand plan is "above their pay grade." Most of the humour in the film comes from watching these low-level guys trying to get through a particularly shitty day at work. There's a scene about halfway through in which Richardson is invited into the vault of plans, for want of a better name, and it reminded me of a similar scene in Robocop wherein Miguel Ferrer gets access to the executive lavatory; the pure glee of taking an unexpected step higher in the bureaucratic hierarchy and the immediate frustration of the added layer of bullshit you have to deal with. The bureau agents are really a likable group of characters, at least until Thompson shows up and becomes a genuinely menacing antagonist and everyone stays out of his way (why do you think they call him The Hammer?)

There's a lot of humanity in these overworked characters who can't catch a break at work because they don't have all the information they need to do their jobs efficiently. They're so tied up in red tape that there are even times when you'll find yourself rooting for them. That way, if you're not invested in the Damon/Blunt relationship then you can side with the other guys. 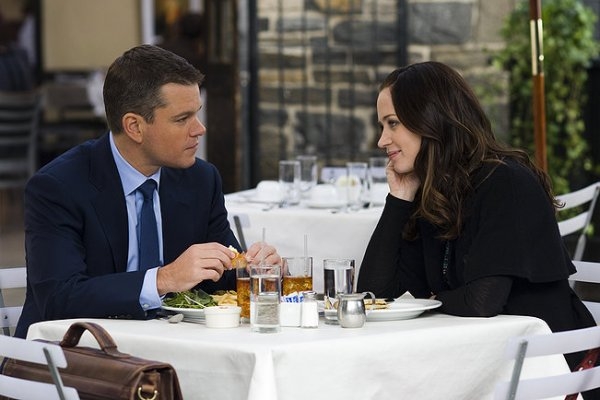 You can do romance in movies without one character giving the other character a series of gifts, see?

The main problem with The Adjustment Bureau is that it all gets a little silly and flimsy in the third act and then gets far too soppy for its own good. I was very disappointed that a film about a politician fighting bureaucracy that transcends governments ends with a "power of the human spirit" message, rather than a sharper satirical point. It seems like all the best ideas were used early on and then somebody somewhere got scared and they threw in a heaping helping of Bruce Almighty so they wouldn't offend any followers of the great American religion, which is similar to Christianity only they actually believe Morgan Freeman is God and that you can only get into Heaven by being rich and belligerent.

MINORITY REPORT: You call this a thriller? You call these relatable antagonists? Whatever man, I'm putting this whole review in my rear-view. The Town, on Blu-ray and DVD now. - Ben "The Third Jack Ryan" Affleck