A Detective Story about the People America Forgot

EXPECTATIONS: Rare is the occasion that I get to wander into a movie knowing absolutely nothing about it. My cinema-centric lifestyle dictates that I see the trailer for every major release many months in advance of ProfessorClumsy shoving me out the door to go and see it. This means smaller films often fall through the cracks, mostly because they never show up around here, anyway. My local theater got three new releases this week, and because Clumsy is tackling Resident Evil: Afterlife like a champ, he told me to just flip a coin and go with it.

Winter's Bone has been snaking its way through the indie circuit for months, but only now has this particular travelin' picture show made its stop in my area. It won awards at this year's Sundance Film Festival, so either I'm about to see an early Oscar contender or another piece of pretentious crap nobody will be talking about a month from now.

REALITY: Think back to the first time you ever saw the movie Brick. This might be difficult for a lot of you, as most people have never heard of it and a fair number kinda hated it. In that case, try to imagine that there's a movie called Brick, and that you've seen it and enjoyed it. "Wow," you (might) think to yourself, "A film noir detective story that takes place in a high school and revolves around high-school characters and cliches! This is a unique and inventive use of the genre that I've never considered before." That's basically what watching Winter's Bone is like, the main differences being that nobody talks like they're living in a poorly written novel and there's not much actual detecting going on. What begins as a sob story about the burdens of a teenage girl quickly morphs into a dark "whodunit" story that's more about generating a tone than jumping through a thousand narrative hoops.

Ree Dolly (Jennifer Lawrence) is your typical 17-year-old girl living in the Ozark Mountains: She's poor, she can't go to school because she has to take care of her mother and two younger siblings, and her father has been missing for two weeks. One day, Ree is informed that her father is out of jail on bond and potentially on the run. If he doesn't show up in court, then the bail bondsmen take control of his land, making Ree and her family homeless. With the help of her unfortunately named uncle Teardrop (John Hawkes), Ree sets about tracking down her father through his connections among the local drug dealers and meth addicts. 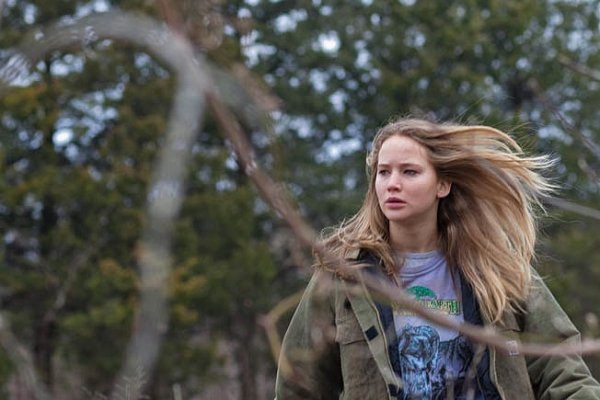 At first, it doesn't seem like there's much of a story to Winter's Bone. "Where is Ree's father?" can't possibly be enough to carry an entire film, can it? As it turns out, it certainly can, but that doesn't stop them from exploring other narrative avenues as well. Also coming into play are a Charlie Daniels look-alike named Thump who might or might not be the head of the local crystal meth racket; Ree's friend Gail, who might or might not be her one-time lover (but somehow has the least embarrassing name in the entire film); and the question of just what exactly is wrong with Ree's mother. While few of these things are really germane to Ree's hunt for her father, they nevertheless help to flesh out a story that could easily have become thin and trite.

With all this talk about meth addicts and deadbeat dads on the run, it stands to reason that Winter's Bone might not be a very pleasant film. No, far from it. It's a bleak, almost depressing film about life in the backwoods of America, and it has no problem showing us the dark, sticky underbelly of the idyllic mountain towns we often see on shows like The Andy Griffith Show or South Park. There's no wacky comic relief or psychotic fat kid to keep our heroes company. Instead, we get characters just as flawed and potentially dangerous as the supposed villains. There's a sense that Ree could just as easily fall prey to the drug runners at the end of a crack pipe as at the end of a shotgun.

Despite the mountain setting and openness of the outdoors, the film sets a very claustrophobic tone. The filmmakers do an excellent job of making you feel the barren cold of the Ozarks. As someone who's spent plenty of years up in the mountains, I can confirm they captured the dank coldness of the mountain town a little too perfectly. Actually, there's not even a town to speak of in this film. There are houses, and we see the inside of a school or a bar every now and then, but for the most part it really does seem like Ree and everyone around her are living up in the hills completely off the grid. Winter's Bone plays like a detective story about the people America forgot. 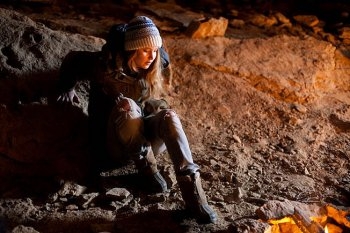 See? She ran so far that she couldn't make it home for dinner.Probably the most impressive thing about Winter's Bone is that absolutely none of it feels forced. While the dialogue might not be Shakespeare, it's convincing enough without every other line being "I ain't never heard nuthin' 'bout no missin' daddies." Mountain accents are easy to fake, but a bad accent can completely shatter the illusion. No one falls prey to that, either because they've developed good accents or because they don't have enough screen time to completely fuck it up. Jennifer Lawrence, especially, does a fantastic job. Without overselling Ree's burdens, she generates a lot of pathos in a character that could have easily become a cultural stereotype.

That goes for the whole film, in fact. Rarely, if ever, does Winter's Bone stoop to playing to backwoods stereotypes. The dialogue does have a specific southern-ness to it, but aside from some bizarre notion that everyone living in the mountains runs a meth lab, there are surprisingly few southern stereotypes on display. Despite that, I'm pretty sure they want you to watch Winter's Bone with movies like Deliverance and Harlan County USA in mind. No one forces anyone to squeal like a piggy (a missed opportunity, perhaps), but it seems like the threat is always there; that at any moment a pair of bumpkins might ambush Ree and start doing terrible things to her. Hey, it ain't their fault she's traipsing through the woods all by her lonesome.

It's a film that's very subtle in its execution, but worth every moment if you're into this kind of story. Ree is no Philip Marlowe -- Hell, she's hardly even a Nancy Drew -- but you've got to admire a character as well-conceived and performed as this. Winter's Bone could easily be this year's The Hurt Locker and trounce Toy Story 3 and Inception at the Oscars (because that's just the kind of thing those dicks at the Academy like to do), but it could just as easily fade into obscurity once it finishes its theatrical run. If it sounds like your cup of tea or Mountain Dew or moonshine or whatever the hell it is you people drink, I'd suggest seeing it sooner rather than later.

MINORITY REPORT: I also spent a brief stint in the mountains, in desperate search of someone. Many people from the local village were helpful in locating the missing lady. However, when questions started to be asked about the remains they had discovered, more people starting to go missing at regular intervals. I believe that small town fell victim to a sudden fire that obliterated everything. That was shortly before I left. -Montague "Legally Sane" Smythe