Once again, those dastardly Oscars have decided to screw up your chances in the office pool by tossing in those two stupid categories that you just have to take a guess at. These are the spread-ruiners, they are the Seattle Seahawks of the Oscars. (Well, along with the Best Foreign Language films, but who cares? USA!) However, once again ShortsTV is bringing all the shorts to a bunch of theaters so you can even the odds a bit. But even if you can't make it one of the showings, you can still take Carol in Accounts Receivable down a few pegs this year with Vargo's Short Film Guide 2014.

Viewing Tip: Always start with the Live Action films, because they tend to run straight into depressing-town, and you will want cartoons to bring you back to humanity. Let's see what mood-ruiners there are this year.

Do I Have to Take Care of Everything?: (Finland) Well, this starts off pleasantly enough. A simple seven-minute family gag about a mother trying to get her family ready for a wedding. It's funny and sweet, but it's also basically the film version of For Better or For Worse. Y'know, if For Better or For Worse were funny, or sweet. My point is, a few chuckles are there, but nothing particularly memorable. 6/10

The Voorman Problem: (UK) An interesting premise with amusing performances from Martin Freeman and Tom Hollander. Freeman plays a psychologist who is hired to assess a prisoner (Hollander) who believes he is God, and has been able to convince the other prisoners he is as well. Literally ten of the film's fifteen minutes are spent cutting back and forth between the two men through close shots. The entire short is based around that one concept and a neat camera trick. However, it feels like an essay someone turned in just before the deadline, or like a pitch presentation. Basically, The Voorman Problem ends at a point right where something very interesting is about to happen, like they're trying to sell me on this movie that will never be made. It's still a very good first fifteen minutes, but that's all it is. 7/10 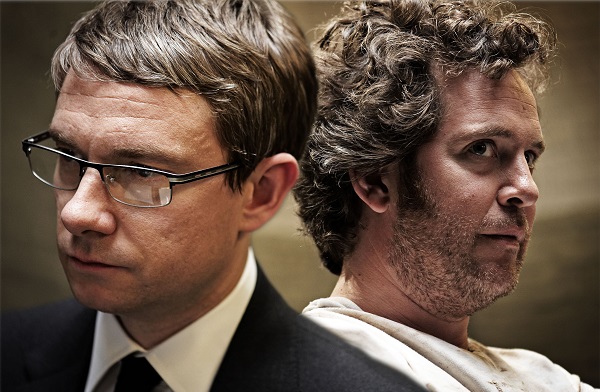 
Helium: (Denmark) This will be your mom's favorite one of these. A hospital janitor named Enzo (Casper Crump) befriends a dying boy (Pelle Falk Krusbæk) by telling him of a magical land called Helium, a sort of "alternate heaven." It's a Chicken Soup for the Soul plotline that brings us into depressing-land, but it's helped along by some impressive visuals and Casper Crump's incredibly spirited performance. 7/10

Just Before Losing Everything: (France) To be honest, you should really just watch that trailer, it's actually a better short film in and of itself. Intimately shot and meticulously paced, Just Before Losing Everything follows a woman (Léa Drucker) making arrangements to take her children and run from her abusive husband. I have no jokes to make here, that's a horrible situation, and the film treats it with the appropriate amount of tension. However, by telling you that sentence, I've essentially ruined half the film. There is a large, unnecessary, amount of buildup where the film tries to keep the audience in the dark about what's going on, even though it is painfully obvious. You have an already desperate premise, there's no need to waste the audience's time attempting to build extra melodramatic tension. 6/10

That Wasn't Me: (Spain) And so we go from domestic violence right into child soldiers. Definitely the best of the Live Action shorts, That Wasn't Me follows a group of doctors who are kidnapped by a rebel group in Sierra Leone, and an unlikely alliance that springs between one prisoner (Alejandra Lorente), and a soldier (Juan Tojaka). Absolutely the best of the live shorts, That Wasn't Me is unflinching and gripping, and also features surprisingly well-made action sequences from former documentarian Esteban Crespo. It's a brave and important film that is also difficult to watch at times, and of all five films, still the one that most made me wish for a feature-length version. 9/10 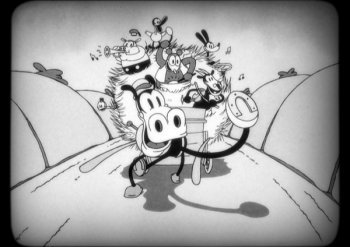 If cartoons had their own country, this would be their flag.Get A Horse: (USA) If you saw Frozen, like a good person, you've already seen this one. A blend of 2D and 3D animation like Disney did with Paperman last year, Get A Horse is absolutely insane with its slapstick. Taking original Walt Disney-as-Mickey Mouse sound clips, Get A Horse bounces incredibly old-school Disney characters, like the forgotten Horace Horsecollar and Clarabelle Cow, in-between their 1920's movie world and a modern 3D theater. Visually and conceptually there's so much going on, it's a little blinding at its frenetic pace. It's a new twist on cartoon violence staples, and it's so bizarre you have to love it. 9/10

Mr. Hublot: (Luxembourg/France) Inventive but simplistic, Mr. Hublot follows a wind-up person in a clockwork world who doesn't leave the house and is apparently some sort of accountant? Anyway, Mr. Hublot eventually forms a relationship with a robot dog who lives across the street, and& cute stuff happens. This is basically it. It's a fun little Wallace and Gromit-esque moment, but the weirdest moment is this song that plays over the end credits, whose lyrics basically remind us all of what a loser Mr. Hublot is. It's...odd. Also, bonus point to this short for adding a cute dog. 8/10

Possessions: (Japan) This was my favorite of the shorts, a combination of hand rendering and CG, telling a magical story of a craftsman lost in the woods, who falls into a world of magical broken items. It's beautiful and surprisingly funny, and more than a bit reminiscent of Miyazaki. It's a fun and bizarre viewing experience with a creative art style. 10/10

Feral: (USA) A good one for animation purists, Feral is a mostly silent, traditionally animated film about a boy raised in the forest who is brought back into society. This goes about as well as you can imagine. It's pretty, but honestly not very interesting. 6/10

Room on the Broom: (UK, most of the full film can be seen here in a series of little tiny episodes for some dumb reason.) Alright, there's a lot of charm here, incredibly cute character designs, and a cast that includes Gillian Anderson, Simon Pegg, Rob Brydon, and Timothy Spall. It's also a cartoon for incredibly small children, and is basically a half-hour Reading Rainbow sketch. In fact, that's exactly what it is, Simon Pegg reading a book while cute creatures walk around and act it out. Still, if you happen to have a small child, there are many worse things they can be watching. And it beats the hell out of reading your child a book, something I simply cannot in good conscience recommend. 7/10