EXPECTATIONS: A lazier, snarkier film critic than myself would immediately write Winter's Tale off simply because it was written and directed by Akiva Goldsman, Oscar-winning screenwriter of Batman and Robin and half a dozen other films the internet loves to hate. While they'd be right, and the consensus seems to be on their side, I'll take the high road by suggesting that maybe Goldsman didn't make a mess of this one. Maybe the novel the film is based on was already an enormous mess and Goldsman was merely the one left holding the bag. Yeah, and maybe horses can fly.

REALITY: I am genuinely impressed with you, 2014. We're not even through February yet, and already you're designing new and exciting ways for your movies to be terrible. You're like some kind of cinematic alchemist, only instead of turning lead into gold, you're turning unfilmable novels into unwatchable fever dreams. But I must say, I stand corrected. Horses can fly, Akiva Goldsman is still a terrible screenwriter and Winter's Tale is a structurally unsound clusterfuck of epic proportions.

Explaining the plot in any meaningful fashion is an exercise in madness, so let's just go over the broadest of strokes. In 1916, a New York City thief named Peter (Colin Farrell) breaks into the home of Beverly Penn (Jessica Brown Findlay), a young lady dying of tuberculosis. Despite her illness, the two fall madly in love and flee the city for her parents' country home. This raises the ire of a demon named Pearly (Russell Crowe), who is out to kill Peter before he can grant someone his one and only miracle. Pearly's boss Lucifer (Will Smith, for some reason) allows him to break protocol by challenging Peter to a duel to the death. 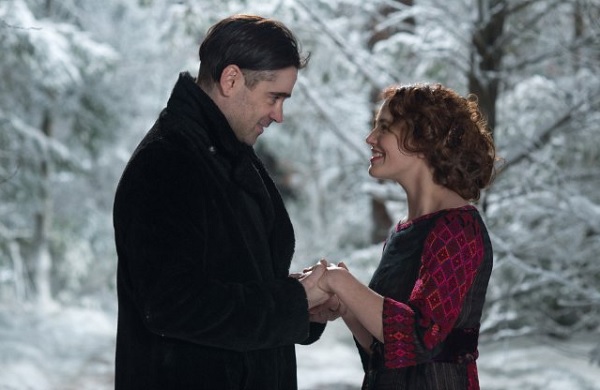 Don't panic, Colin, but there's definitely a dead animal on your head.

If it sounds like I just accidentally spilled one review on top of another, don't worry, because all of that is indeed the same movie. The story's finer points involve an obtuse dance of rules and figures that it never fully explains. There are networks of angels and demons working to sway humanity in their use of miracles. Everybody gets one, and how those miracles are used is apparently of supreme importance. Spirit animals, like the aforementioned flying horse, also figure into the equation, but only in the sense that Gandalf's pet horse periodically shows up to spirit Colin Farrell to his next ridiculous setpiece.

Winter's Tale is a fantasy, you see. For centuries, that label has allowed writers to make up any dumb old rule they please to make their stories make more sense. Generally, the audience is granted some understanding as to what those rules are and how they operate. Otherwise the events that take place have no meaning in the grand scheme of the story. Where this film stumbles hardest is by stubbornly refusing to ease us into anything we're seeing, so we're forced to take it all at face value. People become stars when they die; demons can locate people by shining moonlight on gemstones; Lucifer lives in a studio apartment located in a sewer.

Goldsman, here making his feature directing debut, hides the explanations for this stuff like a child refusing to share his toys, lest he shatter the fragile illusion of his metaphysical fantasy. The film even throws it in our faces, too. At one point, Pearly's right-hand man asks why they can't simply follow Peter out of the city. Pearly responds, "The rules. A dispute a couple hundred years ago." That's supposed to explain it, but it just raises more questions. What happened in 1716 that stopped demons from leaving the city limits? Or is this a little inside baseball for fans of the book? Yes, let's hide the internal logic of our movie in passing references that only readers will understand. That'll endear us to the unwashed masses. 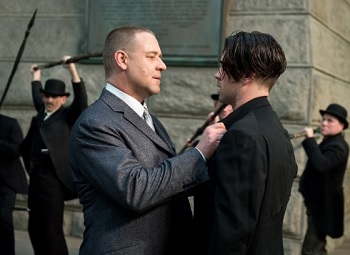 Even after all the inane ramblings about love, destiny and miracles, Winter's Tale gives us a third act even less convincing that what came before it. Peter re-emerges in 2014 and meets Virginia (Jennifer Connelly), a journalist whose daughter is battling cancer. What was barely charming in a 1916 setting comes across as woefully contrived when the story is shoved headfirst into the present day. As a result, the film earns none of the warm fuzzies it tries to wring out of its ending. If you took one of the stories from Cloud Atlas and stretched it to two hours, then you'd just about have something resembling Winter's Tale.

And yet, for as aggressively obtuse as this film is, it's not without its merits. The initial meet-cute scene between Peter and Beverly is actually a lovely bit of writing, and Russell Crowe constantly walks around like he's on the lookout for the nearest toilet. These are a scant few blessings in a film that is otherwise sorely underwritten. Winter's Tale comes across as a film that was never fully conceived from day one, and all the miracles and coincidences in the known universe could not possibly have saved it.

MINORITY REPORT: Will Smith as Lucifer? I had no idea this was a documentary. - Sean "Keanu Grieves" Hanson