REALITY: Every now and then a movie will come along that provides you with enough pleasant surprises and inoffensive entertainment that it almost registers as being better than it is. Make no mistake: Vampire Academy is not cinematically impressive, nor does it offer an especially original narrative, but if you fall within its target audience (and you probably don't), I see no reason why you wouldn't love this.

Vampire society consists of three very different groups: the Moroi are your brooding, angst-ridden bloodsuckers with magical powers who just want to get through life like the rest of us; the Dhampir are their protectors, only half vampire, each charged with defending a single Moroi with their lives; the Strigoi are the kind of uncontrollable monsters with a lust for blood and poor fashion sense that you expect from creatures of the night, once Moroi who fell from grace by killing during feeding. Did you get all that? 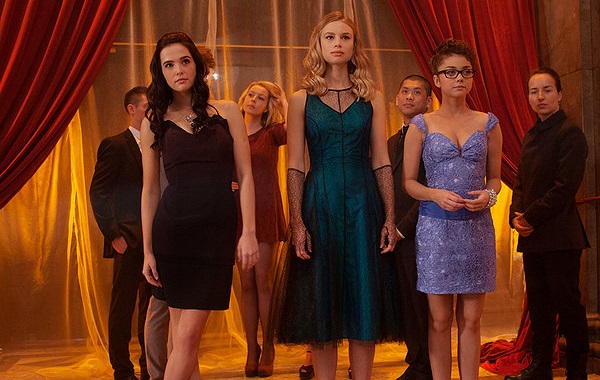 So, Vampire Academy follows the exploits of teenage Moroi Lissa Dragomir (Lucy Fry) and her Dhampir Rose Hathaway (Zoey Deutch). They have a weird psychic bond that allows Rose to experience everything that Lissa experiences, but it only works one way. After running away from the titular Vampire Academy to live a normal life, the pair are dragged back and forced to go through... well, it's a high school movie with a bunch of weird metaphors that allow socially progressive kids to sneak positive sexual attitudes past their puritan parents so you can pretty much guess that it's going to climax with a school dance and lots of sexual frustration between vampires.

You're probably getting the impression that I have some mixed feelings about Vampire Academy and you'd be correct. As a film critic, I have a unique gland that emits happy chemicals when I witness something unexpected. In college, we were taught a great deal of rules and acceptable techniques, effectively reducing the language of cinema into a set of predictable actions on the part of the crew. Wide shots, mid shots, close-ups and a traceable eye line, especially in dialogue scenes, keep the audience clear and unconfused. As with any art form, the real genius of the medium comes about when these rules are broken, deliberately or otherwise, to scupper or alter an audience's expectation of what they are about to see. When a film critic sees something like that, we get chills down the backs of our necks.

Ardent following of the established ruleset tends to be what we are referring to when we say a movie looks like it was made for TV and that is exactly what Vampire Academy is. The direction is nothing more than perfunctory, which makes for an extremely predictable experience. Not only do you always know what is going to happen next, you can usually guess how it's going to look too. 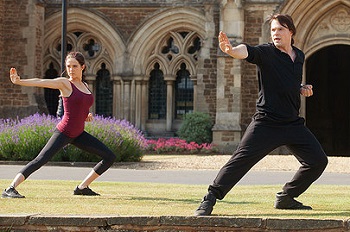 Next week on Vampire the Vampire Slayer...Rose is our central protagonist and narrator, driven at every turn to protect Lissa, not just from rampaging Strigoi, but also from the various threats that high school might offer up. Dealing with bullies, overly-keen boys and the occasional conspiracy are all in a day's work for Rose, even as she juggles them with pursuing a romantic interest in her mentor Dimitri (Danila Kozlovsky). Rose delivers everything with the kind of snarky self-awareness and unhesitant face-punching that all the kids love these days. You can perhaps thank Joss Whedon for this kind of thing, and there certainly is a heavy dose of Buffy the Vampire Slayer in here, but I don't like thanking Joss Whedon for things.

But, with all of that having been said, I can't help but feel pretty positively about Vampire Academy. The main reason for this is probably Vampire Academy's own positivity catching. So cheerful and uncynical is this movie, it's impossible to dislike. Even with it's lack of cinematic inspiration and in spite of its pointless plot twists that don't mean anything. It's just fun to watch these vampire teens interact with each other.

At the heart of it all, though, Vampire Academy is about telling young girls and boys that high school is going to be hell. You're going to get pigeonholed when you're there based on your background and social standing, but you don't have to conform to the stereotypes affiliated with that pigeonhole, especially because the future of our extremely fucked up society is largely in your hands.

MINORITY REPORT: This is everything I was hoping would happen when I heard you were covering this movie, along with the added bonus of me not having to see it. - Martin R. "Vargo" Schneider