We have a one man Rock-and-Roll extravaganza for you folks! Please welcome to the stage Joseph "Jay Dub" Wade, who will be performing his latest hit: a review of Rock of Ages.

EXPECTATIONS: Clearly, I've underestimated the inexplicable drawing power of the "Rock of Ages" stage show. I had no idea there was so much interest in a hair-metal jukebox musical that someone had to go and make a film out of it. Then again, Glee has managed to continue being A Thing for three whole years, so what do I know about shows about music? The trailers paint Rock of Ages as a goofy Hollywood funhouse where Tom Cruise has apparently invented rock 'n' roll. I hope the film pushes this ridiculous premise to the breaking point and creates an entire revisionist history for the '80s where the economy didn't tank, grunge never happened and hair metal lived on forever. That seems like just the thing we need to finally put that decade to bed. 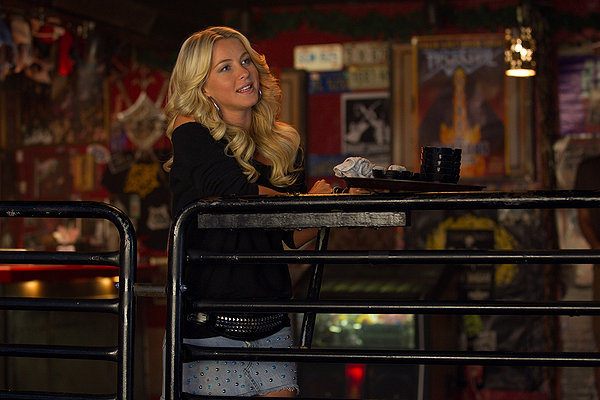 REALITY: Where to start? The best thing about Rock of Ages is that every single part of it is intensely familiar. You know who all of these people are and you already know all of these songs, unless you live in a magical land devoid of classic-rock radio and VH-1 (how much does this place charge for rent, by the way?) Had this film been a completely original production with new songs trying to approximate the '80s-rock sound, this would have been a completely intolerable experience. It's rough enough as it is, but the very fact that the story is built around classic-rock hits performed by such musical dynamos as Alec Baldwin and Paul Giamatti elevates Rock of Ages from cultural atrocity to the world's most fascinating tire fire.


Rock of Ages takes place in Back to the Future's alternate timeline, where LA's Whiskey A Go-Go is now the financially broke Bourbon Room, groups like Bon Jovi and Def Leppard never existed, and all their garbage hits have been instead written by Stacee Jaxx (Tom Cruise). Jaxx is the embodiment of the rock superstar, who has soaked up so much fame, booze and sex over the years that he has retreated into his own head, where he's apparently trapped the souls of all the musicians whose music he's stolen for this film. 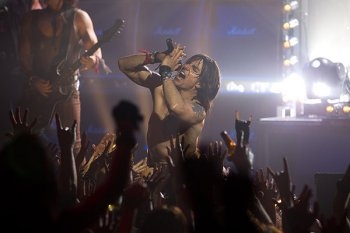 It may look like an impassioned performance, but he's just singing some Cheryl Cole song or something.The actual story follows small-town girl Sherrie (Julianne Hough) arriving in Los Angeles to find fame and fortune as a singer. Instead, she finds a bartender named Drew (Diego Boneta), a city boy with similar dreams, who gets her a waitress job at the Bourbon Room. The two fall in love and he writes her a certain Journey song. Meanwhile, bar owner Dennis Dupree (Alec Baldwin) and his assistant Lonny (Russell Brand) fight to get Stacee Jaxx to perform at their bar in order to keep the mayor's wife (Catherine Zeta-Jones) from shutting them down.

It makes sense that the film's underlying plot is yet another "Let's put on a show to save this building" scheme, because those films were all over the place back in the '80s. Truth be told, it's the least important aspect of this film anyway, so it's difficult to complain about a musical having a crap story, even one as overused as this. If anything, it just reinforces how familiar the film is. Where Rock of Ages stumbles is in not utilizing that plot to strengthen any of the characters along the way. It's simply a means of shuffling certain characters in to sing a song while the previous performers make their way offstage. The paths that Sherrie, Drew, and Stacee take do little but reinforce how utterly flimsy the whole thing is. If you've ever heard the song "Don't Stop Believin'", then congratulations, you know the film's entire narrative arc, emotional hook, and musical palette.

For a film about idolizing the outrageousness of rock 'n' roll, this is a remarkably tame production. It's a film that dresses itself in Motorhead T-shirts and Slayer posters, but when it opens its mouth to start singing, it can't muster anything more potent than a mashup of "We Built This City" and "We're Not Gonna Take It." Every musical number plays out like a poorly staged music video, which is odd given director Adam Shankman's background in music videos. It's surprising how haphazardly cut-together many of these numbers are. Catherine Zeta-Jones' rendition of "Hit Me With Your Best Shot" is fierce, but it's clear they had to shoot like hell to get an editable product out of it. 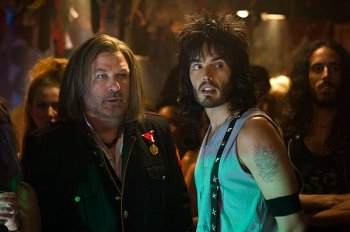 Alec, you need to admit that you owe your comeback to a puppet at some point.The film's one saving grace is Tom Cruise, who I'm convinced actually thought he was in a serious musical about a washed-up rock star. When Stacee Jaxx sits down to do an interview for Rolling Stone, his responses are borderline incoherent, either in willful defiance of the press or due to the constant flow of alcohol to his brain. Jaxx's interview bears a striking resemblance to the actual interview W.A.S.P. guitarist Chris Holmes gave in The Decline of Western Civilization Part II. It's clear he's unhappy knowing he's on the road to becoming a has-been, despite all evidence to the contrary. Little moments like this dot the film, and suggest a much more honest depiction of rock stardom, but they are surrounded by too many song mashups and hammy performances to really amount to anything.

It's marvelous fun watching Cruise slither his way through this film, and it's equally entertaining to hear every word Paul Giamatti chews on as Cruise's manager, but two cartoonish performances can't save a film filled with too many movie stars acting out overplayed classic rock tunes. If you're a fan of the We Play Everything radio format, you might get a kick out of watching Alec Baldwin fake his way through "I Love Rock 'n' Roll." If, however, you're like me and you object to the notion that a Journey song can change the world, you might want to give Rock of Ages a pass and just go browse iTunes for a couple hours.

MINORITY REPORT: So this is Mamma Mia for your middle-aged dad who doesn't get out much? Perfect gift for Father's Day! - Ian "Professor Clumsy" Maddison