Men in Black III; Chernobyl Diaries; Get the Gringo

Will Smith and Tommy Lee Jones are back together, but not really, for Men in Black III; memories of nuclear disaster resurface in Chernobyl Diaries; and Mel Gibson proves he's worthy of a comeback in Get the Gringo.

EXPECTATIONS: The first Men in Black was a hugely entertaining sci-fi adventure comedy wherein Will Smith brings some much-needed modernity and joyfulness to the idea of the shadowy government organisations that supposedly hide the truth about extra-terrestrial life from the public. Its sequel, Men in Black II, is an embarrassment, a bizarre mess of bad jokes and nonsensical storytelling. So this third film could really end up going either way. Unfortunately, my gut tells me it's probably going to end up somewhere in the middle.

REALITY: Rather than falling in the boring medium as I'd expected, Men in Black III is actually worse than that. It's not quite the disaster of Men in Black II, but it's not even close to Men in Black. Almost everything about this film is a major misfire, and there's not enough that works to raise it above the level of disappointment.

When Boris the Animal (Jemaine Clement) escapes from a prison on the Moon, he vows to get revenge on the man who put him there, MiB Agent K (Tommy Lee Jones). One day, K simply vanishes and nobody is left with any memories of him apart from his long-serving partner Agent J (Will Smith). The reason for this is that Boris has traveled back in time and killed K as a younger man. J must chase Boris back into the 1960s and work with the younger Agent K (Josh Brolin) to save the world from destruction. Yeah, the world was at risk of destruction too. 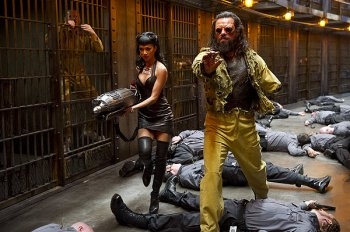 The zany antics of a terrifying, unstoppable death machine.That's about as much sense as I can make of this plot. The time-travel scenario that takes centre stage is built around a rift in the J/K relationship, but once you replace one character with a younger version, that rift is no longer a part of the narrative. It's a similar problem to the one presented in J.J. Abrams' Star Trek, in which Zachary Quinto is replaced for most of the second act by Leonard Nimoy, ruining the dynamic between him and Chris Pine. Here, the majority of the film is played out between Smith and Brolin, completely negating the driving force behind the entire franchise, which is the relationship between Smith and Jones.

As for the rest of the plot? It's pure nonsense. Throwing in a bunch of "save the world" sidetracking doesn't make the film seem more exciting, it just makes everything less personal. I understand that you need some action in the third act and you can't just have J protect K by hiding him in a basement, but you can't just throw brand new MacGuffins at the screen in the hopes that we'll care, it upsets the balance.

That's not to say that this is a particularly well-balanced film in other areas. Men in Black III's biggest problem is its uneven tone. Remember how the first film was really humourous? Remember how the big scary villain was also very silly and in the third act revealed himself to be an impossibly huge cockroach monster? That was a funny joke. Remember how Tommy Lee Jones defeated him by allowing himself to be swallowed whole? That was hilarious! This villain, Boris the Animal, is just terrifying. During the opening titles he massacres countless people, and the whole plot is set in motion because he succeeds in traveling back in time and murdering one of the principal characters before anyone even knows what's going on. 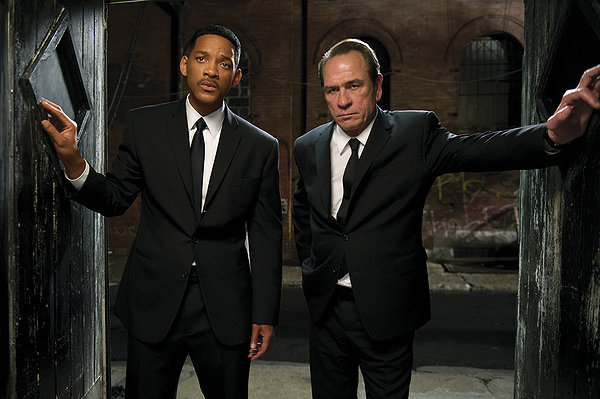 Yeah, we're back and in black and all the rest of that crap...

It certainly makes him an effective antagonist, but doesn't make for especially light viewing. This guy just never does anything funny. It's not the fault of the performance either - nobody would ever accuse Flight of the Conchords' Jemaine Clement of not being inherently funny - but rather the fault of the character itself. Clement is masked in hideous prosthetics, launching instant death missiles from his hands and speaking in warbling, guttural tones. It's true that the Men in Black antagonists of old have always had that sense of the hideous and horrific about them, but you can't deny finding Vincent D'Onofrio's performance as a giant cockroach crammed into a man's skin as funny as it was unsettling. Boris is not funny in the slightest, and his fearsome shadow hangs over the whole film, making his rather diminished screen time more edgy than entertaining. By the time we enter the third act, we don't know anything about this character other than that he's scary as hell and doesn't like his nickname.

This film's failure is not all on the shoulders of an overly grim tone, though; there's also the question of the absolutely bizarre subtext. You see, in this film the Men in Black themselves are no longer working for the good of the universe and its denizens, they are xenophobic aggressors shaking down immigrants for leads. They are directly compared to a pair of racist cops who pull Will Smith over because he is black, but even then they expect us to agree with them. In one scene, J and K bust into a Chinese restaurant and K slaps the owner with a spiky fish before tearing his clothes off to reveal a giant slug body. The other Chinese staff members are also revealed to be giant slugs (one of whom is violently beaten to death with a frying pan by Tommy Lee Jones). So I guess the Chinese are all giant slugs in disguise, right? Good to know. Later, a Muslim has his turban removed to reveal a giant, bulbous head. Oh, I see... this is valuable information. 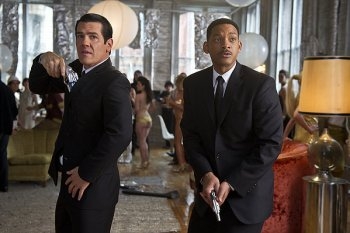 How odd, everything suddenly got young and energetic around here.In the film's most shocking scene, Smith and Brolin tear off a man's head and use it as a bowling ball to get information from him. The information they acquire is that yes, the boss is in his office. It sure is a good thing you're nothing like those racist cops who thought you stole a car just because you're black, eh? I mean, you really did steal that car, but it's not because you're black. This has suddenly become a satirical take on The French Connection, has it? I assume this is what they're going for here, trying to suggest that instead of J bringing out the more human side of K in the first film, he's actually becoming more like the grizzled old miser. I found the whole idea rather off-putting, but it certainly is unexpected and interesting.

Men in Black III does a few things right. Will Smith is as likeable as he has ever been, and Brolin is just absurdly good at imitating Tommy Lee Jones, to the point where I though Jones must have dubbed some of Brolin's dialogue (though apparently not). They have excellent chemistry together, much like Smith and Jones did in the first film - though not at all like their chemistry in this film, mostly because Jones is half asleep throughout his limited screen time. I know I've spent almost this entire review comparing this film to the first Men in Black, but I wouldn't feel so compelled to do that if Men in Black hadn't been so good and Men in Black III so disappointing. Still, at least it's not as bad as Men in Black II.

MINORITY REPORT: The best part of this movie is that the director's self-insert character is all-seeing, all-knowing, and because of it, he's neurotic as shit. "In this timeline, Lara Flynn Boyle is a plant lady. Oh, no one likes this timeline." - Donald "TheBigBudgetSequel" Hallene III