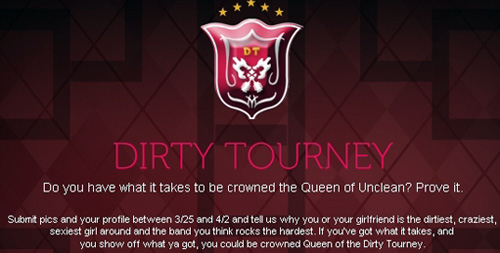 Any bracket-based thrills normal people experience this weekend will be due to college basketball. However, depraved skanks and the rube boyfriends who enjoy volunteering them for public degradation will unite to celebrate the onset of the Dirty Tourney, in which 64 women will try to outwhore each other for the amusement of shitty musicians.

Dirty Tourney participants submitted "dirty" photos and an alarming amount of personal information in hopes of being flown to Vegas to see the SnoCore Tour. Their identities won't be revealed until this weekend, which means they're not yet available for mockery and humiliation, at least not in relation to this event. That leaves the responsible bands. Each dignity-deficient contestant must declare the song she's "getting dirty for." Theory of a Dead Man's "Bad Girlfriend" (She's a dick magnet) cancels out Burn Halo's own I-heart-sluts ode "Dirty Little Girl" (She gives it up for free/she's only out to please). Saliva's "Hunt You Down" contains lines such as "I'm gonna stomp you into the ground" and "See the fear that's in your eyes." It's natural to assume this song describes stalking and battering a woman, but Saliva clarifies its true intent: "When you chose to raise your hand/that's when a boy missed with a man." Clearly this is about bludgeoning some know-it-all schoolboy who won't stop waving his arms to tell teacher the answer. Now that's a cause the band's moron following can support. Oh, and there's Framing Hanley, who musters a pathetic rendition of Lil Wayne's "Lollipop."

It's not worth getting to know and hate Framing Hanley, because they'll soon vanish into ironic-novelty-cover-of-a-black-person obscurity, just like Dynamite Hack, Alien Ant Farm, and whatever asswizards remade that "Pony" song. "But Framing Hanley respects Weezy," one of the group's drooling listeners might contend, assuming he's not from the usual "at least this takes real talent, unlike rap" camp. "They have nothing but admiration for hip-hop culture, and .." Stop talking, asshole, I have a picture to show you. 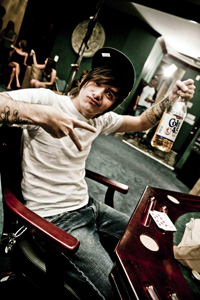 The Dirty Tourney hard-sells the prospect of dudes nominating their fuck-buddies for consideration, but I'm having trouble contemplating the upside of being able to boast "You know Saliva? Well, they said my lady's the nastiest ho they've ever seen!" The Dirty Tourney openly uses the term "Queen of Unclean" to describe the grand-prize winner. This is a title for which real women are competing, even though the true queens of unclean transmitted their sex-leprosy to these dickheads long ago without fanfare.

The Dirty Tourney supposedly starts today, which means by the time this article runs, it will be too late for any women involved to rethink their participation, especially in light of the following dubious small print from the "Sign-Up" and "Official Rules" pages:

Stated: "Multiple photos are accepted, nude photos are not."
Implied: Nude photos are strongly suggested, and are, in fact, the whole point of this whole "competition," but we can't actually display them on a site sponsored by a Warner Bros. affiliate. So send multiple photos, one - preferably only one - of which is clothed.

Stated: "If you are under the age of 18, you must obtain your parent or legal guardian's consent to enter this sweepstakes." This failsafe clause is located between disclaimers: "This contest is open only to legal residents& who are [18] years of age or older" and "Entrants must be 18 years old and provide a copy of their valid driver's license photo."
Implied: Oops, how did that thing about the "parent or legal guardian" get in there? Oh well, hick ma and pa, feel free to send suggestive pictures of your tarted-up 14-year-olds.

Stated: "Each potential Grand Prize Winner will be selected in a random drawing."
Implied: Thanks for going through all this pointless pageantry! We're glad that you filled out our embarrassing "confession time" section ("The more you give, the more criteria you have to be judged upon"), but that was just for our own entertainment. Now let's pick a name from Saliva's cowboy hat and crown Queen Skank!