Definitely Not The Last

EXPECTATIONS: I don't expect much out of The Last Exorcism. It's been four months or so since I last saw a trailer, and I'd forgotten this movie even existed until sometime last week. At any rate, the title doesn't inspire much confidence. I'm fairly certain this won't actually be the "last" exorcism. If it's a hit, expect a sequel. If it's not, expect a sequel anyway.

This is a rare occasion in which I'm going into a movie almost completely blind. I know there's an exorcism and that it might be someone's last. Expectations are low.

REALITY: I was all prepared to rip this movie apart for your reading pleasure. However, a funny thing happened on the way to the end credits. The Last Exorcism actually turned out to be good. Very good, in fact. As far as the "found footage" genre goes, this one is better than most, but not because it's actually demonic or scary. In fact, most of the film works as well as it does because it's not a typical horror movie.

The Last Exorcism presents itself as a faux-documentary about Reverend Cotton Marcus (Patrick Fabian), a preacher and former exorcist who's about to give up the practice after realizing that exorcisms do more harm than good. As his farewell to the job, he has hired a documentary crew to follow him on his final exorcism to show them that what he does is all just an act. The group travels to the Louisiana home of the Sweetzer family, where 16 year-old Nell (Ashley Bell) is convinced she is possessed by a demon. As Cotton applies his technique, he slowly comes to discover that Nell may be genuinely disturbed, or perhaps actually possessed.

For the most part, this is not a particularly scary film. In the early going, it is much more concerned with establishing the characters and their distinct personalities. Patrick Fabian completely owns the movie as Marcus. As an actor himself, it's not much of a stretch for him to play a performer, but he sells it nonetheless. I totally buy that Patrick Fabian could be an actor. While the rest of the cast members fill out their thankless roles as boring filler, Fabian and Ashley Bell deliver a pair of great performances in characters better suited for a SyFy original movie. 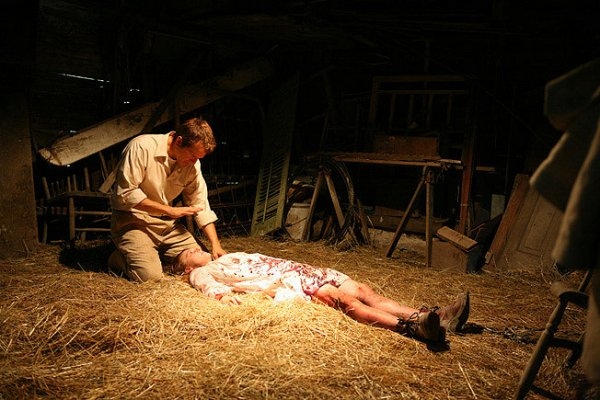 No officer, I swear I found her like this.

As far as scares, there are very few gross-out moments, and even fewer scenes of out-and-out violence. The film instead settles into a rhythm of steady disquiet punctuated by moments of abject terror. The first genuine scare of the film is a shadowy figure standing at the end of a dark hallway, and The Last Exorcism slowly builds to full-on nightmare mode for the very last sequence.

The filmmakers don't ratchet up the intensity until about twenty minutes from the end, at which point we've already been faked out two or three times as to whether Nell is or isn't possessed. This is the most intriguing part of the film, because it keeps us constantly wondering which explanation is the truest one instead of just guessing "Who will get eaten next?" It's just as much a mystery as it is a horror story.

Of course, all of Marcus' detective work and deductive reasoning can't save the movie from the path it settles on in the very last scene. The ending completely undermines everything the film had previously been working toward, and I can't help but feel a bit insulted. They couldn't leave well enough alone and just let us have an interesting, non-retarded conclusion to a movie that has been intelligent in its every move until this very moment. The movie played me like a fiddle for 87 straight minutes, and then spat in my eye at the very last second. Some studio executive must have burst into the editing room one afternoon and shouted to no one in particular "WHERE THE HELL'S ALL THE FIRE AND BRIMSTONE!? WE NEED TO PUNCH THIS SHIT UP!!"

This was something that had been bugging me since I left the theater Friday afternoon, and I spent most of that evening rooting around for answers. Director Daniel Stamm wasn't available for comment. To be fair, this was mostly because I couldn't find his number. I was, however, able to get in touch with some guy claiming to be Stamm's personal assistant.

Jay Dub: Thanks for taking the time to answer a few questions.

Bryan Mellnick: Not a problem, happy to do it.

JW: So let's get right down to it. The question on everyone's mind: Why call it The LAST Exorcism? Isn't that already hurting your chances for a sequel?

BM: Not necessarily. We never really went in thinking we'd make a sequel in the first place. I suppose we could, though. If you pay attention to that final scene, certain characters may not be dead.

JW: I guess, but isn't that kind of like saying certain characters don't get frozen in carbonite and taken to Jabba the Hutt?

JW: Anyway, since this IS the last exorcism, wouldn't a sequel have to be about something completely different?

JW: Well you can't call it After The Last Exorcism or The Very Last Exorcism. It would betray the integrity of the original, wouldn't you agree?

JW: So naturally a sequel would have to feature the "certain surviving characters" going up against some other frightening thing. Something like ... zombies. It could be about zombies.

BM: If the studio wants a sequel, we'll see about that, but that's not something I can really comment on ... Other questions?

JW: Sure thing. What the fuck is up with that ending?

JW: Simple: The film has just spent 85 minutes playing out this really understated yet emotionally draining story about a faithless exorcist realizing that he might be able to help this young girl whose diagnosis is not at all as simple as it seems. Then, after two or three very effective twists and curveballs, the movie tosses us an ending that may as well be a title card saying "Sorry, the movie isn't actually about the thing we just told you it was about. This ending is cooler and has more explosions because we have budget money to spare!"

BM: Oh, I see. It's true that the director wanted to close out the film on a high note. Once we got to the set, everyone realized just how boring it would be if Marcus had just exorcised the demon and then went back home. More realistic? Perhaps, but then it is a movie about demons, so you gotta give the people what they want. I guess you're damned if you do, damned if you don't. If you didn't like it, I don't know what to tell you. That wasn't up to me.

JW: But didn't it occur to anyone that ending on that particular "high" note was kind of a shitty move?

MINORITY REPORT: I am no stranger to the dangers of demonic possession myself, having suffered the toying of the devil himself on many occasions. You have no idea of the mind-numbing terror you experience when you have no control over the terrible things you are doing. My third wife, God rest her soul, would back me up here if she could. I would have handled the situation much differently; a simple pillow over the face, for instance, would be much more effective than all that messing about with knives and such. -Montague "Legally Sane" Smythe