A diagram of acne.

Various parts of my body have decided to revolt ever since I moved up to Seattle. It's like one of those prison riot movies, only instead of murderers and rapists throwing flaming rolls of toilet paper off the second-story floor, my digestive system and brain are throwing flaming rolls of toilet paper off the second-story floor. This makes for some particularly uncomfortable moments in social situations, even moreso if I'm at a toilet paper factory grand opening (and believe me, there are more of those than you would expect). I've been trying to beat my organs into submission (stop laughing) by medicating them into paralysis, but so far I've only experience limited success. For riots in the stomach acid cell, I swallow a few dozen of those prescription antacid tables that Brian Dennehy used to advertise before the company that was paying him realized nobody anywhere would buy anything from Brian Dennehy. The guy has the star power and magnetism of one of those devil ventriloquist dummies that used to kill people in the 1960s. All complaints about Brian Dennehy aside, my body continues to rage its inferno of discontent, snuffing out my futile attempts to quell it. The latest guerilla attack that I have come under fire from is one of the human body's most devious and underhanded tricks in the history of human body tricks (which dates back to 1743)... the dreaded acne attack.

Before I lurch into this powerful and gripping tale of irritated skin, let me take you back about 12 years, around my junior high school phase. I was an energetic and plucky young lad who resembled Fred Savage after he had been beaten in the face with a shovel a couple dozen times. All my friends were experiencing the joy of going through the wacky hormone rollercoaster ride known as "puberty," a time when the aces are wild and all bets are off and he's a good cop gone bad, framed for crimes he didn't commit... and now he's back for revenge. My friends and enemies, who were previously clear-faced, suddenly began developing complexions that resembled an explosion in a tomato factory. Their faces started dripping grease during particularly strong winds, causing them to play Dungeons and Dragons or listen to Def Leppard. Those two examples alone show the extreme dangers of puberty, in addition to the extreme dangers of growing up in the 1980s. I, in a particularly stunning display of ignorance, mocked them mercilessly and prided myself on my smooth and clear complexion.

"Ha ha, you have zits!" I would shout while trying to force my hair down enough to fit under the classroom doorway. "You have zits while I do not! I have won life's grand prize of clear skin!" Then I would go purchase more Kirk Gibson baseball cards or new parachute pants.

The God of Acne was not pleased. 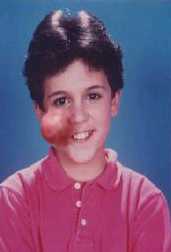 A picture of myself in high school (computer simulation).

My face began to revolt in high school, appearing with the sudden unexpectedness of the Pearl Harbor attack, the deadly ferocity of the Pearl Harbor attack, and the remarkable disgust of the movie "Pearl Harbor." I woke up one day during freshman year, went to the bathroom, and noticed a cantaloupe-sized welt on my cheek. I had initially thought that perhaps a golf ball had snuck its way under my skin while I was asleep, but further study went on to prove that this wasn't any piece of sporting equipment: it was a zit. Now before you start saying, "oh big deal, everybody has zits! Your story sucks and I hate your website and I hate you and I have all the episodes of 'Mama's Family' on tape," let me point out that I didn't have your normal, everyday acne. No, I was blessed with superzits.

A normal zit is formed when stray dirt, oil, or farm machinery flies into your skin and blocks the oil glands. This makes your skin unhappy and it begins to pout and turn bright red, in addition to producing a pussy substance that is routinely seen coming out of aliens' ears when they're killed in those terrible movies about UFOs invading North Dakota. My acne was much, much worse than that; somehow the dirt and crud managed to fly so far into my skin that it burrowed down to my bone. This caused the Skin Patrol to go into vigilante mode, crashing their Skinmobiles into the offending particle and creating a puss pileup inside my face. The irritation was so deep that it was hanging out with my nerves, kicking back and drinking beers while laughing at my pain. And folks, those suckers hurt like a bitch. They would sting in pain whenever I touched them, looked at them in a mirror, or listened to music with a lot of vibrational bass. The worst part was that there was absolutely no way to pop the bastards like a really disgusting water balloon since they were so deep under my skin. The only conceivable way to get rid of them would involve me dying via explosive decompression, and since I wasn't living inside a faulty spaceship orbiting the Earth, this was out of the question.

The acne attack didn't let up for the next three years or so. I was forced to develop exciting new ways to disguise my megazits, such as wearing an eyepatch that covered my nose or my cheek or my chin. I would come to school every day, stand up in the middle of homeroom, and exclaim, "oh! I thought today was National Pirate Appreciation Day! Boy, don't I feel like a fool!" I think some of my fellow classmates began to catch on after the second consecutive year, probably because I wore five eyepatches to school every day and none of them were covering my eyes. I tried everything to nuke those megazits... nothing worked. I would lather soap and water onto my face every morning and night. I'd use those over-the-counter creams which show pictures of happy interracial teenagers partying on the beach and running in slow motion for some unknown reason. I cut all excess lard and Crisco out of my diet, yet I would still wake up every day looking like I had blocked a volley of BB-gun shots with my face the previous night. A dermatologist prescribed me some mysterious topical goo that came in a white plastic tub and smelled like the bathroom of a hospital. While it was effective in making my skin flake off in large chunks, it didn't really do anything to stop the internal acne attack that appeared to be festering in my bloodstream itself. Then the doctor brought out the big guns: Accutane. 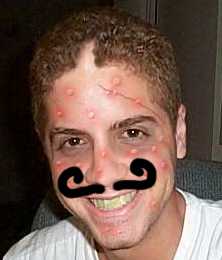 A current photo of myself (computer simulation). No, I do not know why I have a scar and a large mustache or what appears to be the Bubonic Plague. And yes, this is the like the only picture I have of myself, so expect me to continue Photoshopping it.

Accutane is a highly scary drug which was approved by the FDA because they forgot to come in on a Monday and the janitor accidentally filed the form. Seriously, nothing is more frightening than reading the label on a bottle of Accutane, which says the following:

Sure you're going to turn the kiddie pool red with blood if you dip your ass into it, but hey, your acne will be gone! Also you'll think you're a 5,000-foot tall invisible cyclops from Mars! Teenagers are often willing to take this risk, mainly because teenagers tend to be stupid. I know I sure as hell was. The risk paid off for me since the Accutane nuked my entire underground zit production facilities, sabotaging their supply lines and cutting them off from the rest of the radical Muslim community. I was still suffering from normal acne, but since it didn't feel like I had bloated ticks crammed under my skin, things were looking a lot better (literally). When I moved to California, my skin actually cleared up completely. It was great; I didn't have to run the risk of touching my face and having a clear coat of waterproof sealant rub off onto my hand.

Cut back to today. My skin is vocally expressing its displeasure with the city of Seattle by growing horribly irritating mounds of doom. I'm back on the plastic tub o' goo prescription again, serving no functional purpose besides making me pay $5 a month in medical coverage. I've been washing my skin twice a day, refusing to dip my face in the grease pit behind the local Arby's, and generally trying to make my skin as happy as possible. No dice. I suppose I'm just allergic to the Seattle air, an environment which makes people's organs do crazy things like convince them to get their nose pierced or dye their hair the color of Skittles. I plan on seeing my doctor in the immediate future, begging him to use some experimental procedure of shooting gamma lasers into my face or dragging me from the bumper of his Ford Explorer or whatever it takes to get my skin back to normal. I don't know exactly what he'll prescribe, but I can be sure of this: Brian Dennehy won't be endorsing it.