Don't Look Up... Until The Effects Finish Rendering

EXPECTATIONS: The trailers and posters for Skyline don't exactly inspire me with confidence. Evoking Roland Emmerich films is not the way to get my interest. Having also discovered that this film was directed by the same Strause brothers who directed AVPR: Alien vs Predator - Requiem, my hopes slip even lower. Having then discovered that those very same Strause brothers came from the world of visual effects and that their own visual effects company produced this film, my hopes slip lower still.

It all starts when struggling artist Jarrod (Eric Balfour) and his pregnant girlfriend Elaine (Scottie Thompson) travel to L.A. for the huge birthday bash of Jarrod's old school friend Terry (Donald Faison, of Scrubs fame), who just happens to be a multi-millionaire Hollywood visual effects superstar. Terry surprises Jarrod that night with an offer to join his visual effects team on the grounds that he is a good artist. We know Jarrod is a good artist, because he wears a tank top with "Good Art" written on it. Can you see where this is going?

Well, that's just it. This film is absolutely about visual effects driving a film. I don't mean in the way that a lot of films are driven by their visual effects, but also try to do other things well. Skyline explores visual effects as an entity in the same way that most films explore humans. It might seem self-congratulatory and very smug to make a film about your own contribution to the film industry, but the statement here is made with such a tongue-in-cheek attitude that it actually manages to delve all the way through silly into succinct. 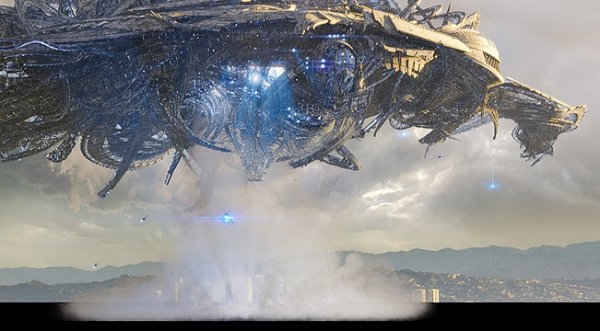 It's like a Ray Harryhausen film for a new generation.

You have to understand the abstract ideas being presented here to get the optimum enjoyment out of this film. In order to do that, we're going to break it down into two pieces. The first of these pieces we shall call "storytelling." The storytelling segment of the film is restricted to a single hotel building. In fact, the freedom of the story becomes more and more restricted as the film draws on, until only two characters remain and they cannot escape the roof of the building. Then there is the "visual effects" element of the film. The visual effects are not restricted; they rule the coup on the outside of the hotel. The creatures are the ones restricting the story, they decide the fates of the characters and they are even constantly gifted with new abilities. You may ask yourself, "What are these creatures?" and the only logical answer is "They are visual effects."

Skyline very deliberately evokes a lot of the major visual-effectsploitation films that come immediately to mind. Very obvious references are made to Independence Day, Cloverfield, War of the Worlds, The Matrix etc., but every time it is done with an eye to one-upmanship and to establish context. They are literally reminding you of things that visual effects have done previously so they can show us what carnage can be wrought now that the effects are free. They can do whatever the film-makers want them to do at any given time. They can silently enter a scene and then crush a car under their feet if they have to, they can re-attach their limbs if needs be, it doesn't matter. Humans in this film are arbitrary, their stories unnecessary, because the film is entirely about visual effects and their impact on films. 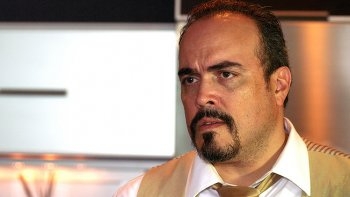 David Zayas proves that he's not just a poor man's Powers Boothe.I'd like to return to the story for a moment, if I may, unnecessary as it may be. Most of the film involves the actors being trapped inside Terry's hotel room, which happens to have a pretty good view of LA and a high-definition telescopic camera set up by the window so the heroes can watch what's going on outside without excluding the audience in any way. They watch things unfold and are able to relate it emotionally to the audience. There are two reason for this to become important. One of them I will get to later and the other I will cover right after this paragraph.

The visual effects entrance and abduct people by making them look at a beautiful, bright light. It pulls them outside and they are then abducted. At one point, Elaine even relates "Why wouldn't someone want to look at something so beautiful?" Of course we want to look, we're here to see something new and exciting. Well, leading man Jarrod (being a "good artist") connects with the beautiful visual effects on a physical level. Because of some intrinsic, artistic understanding, he takes the visual effects into his body. He is overcome by the visual effects until he completely becomes a visual effect. In this moment, he becomes the unbeatable hero of the film, because visual effects can do whatever the film-makers want.

The creatures themselves are incredibly entertaining to watch. There are basically two monsters on the ground antagonising our heroes. One is a Cloverfield-style giant behemoth, batting tanks off the road and trampling cars; the other can best be described as a flying vagina squid that absorbs people to make use of their mental faculties. The fact that they cannot be beaten by a human is a consistent source of comedy, especially when David Zayas, playing a bad-ass hotel manager, comes up with an elaborate plan to take one down that just doesn't work.

You can see where I'm going with all of this. You can see it in the battle sequences. The only time things ever go in favour of the human side is when the humans are represented by visual effects; in one scene a space ship is efficiently shot down by fighter jets. But, everything comes to its absolute culmination in the final act. You may remember Alien, with its extremely sexual-yet-not-sexy imagery that adorned every scene. Well Skyline takes it to a new level, with brains gliding through urethra-like tubes, resembling gigantic sperm, while pregnant women are sucked up into womb chambers to suffer forced abortions in order to acquire the vital cells needed to grow more aliens, which are then implanted with the brain sperm to give them life. It's the kind of imagery that stays with you.

When the film was over, I was soon informed that they are already working on Skyline 2. My only response to that would be "Yes, thank you. More Skyline, please."

MINORITY REPORT: It seems to me that the alien invaders being entirely defined by their own artificiality is their downfall. Had I been there, I would have stuck the kettle on and made a pot of tea. Having enjoyed my tea with some ginger biscuits, I would proceed to sit and stare at the walls until the CGI menace had been deleted and I could return to prowling the streets in relative safety. -Montague "Legally Sane" Smythe