Finding Out What the Story Is

EXPECTATIONS: Oh, yay! Another romantic comedy with a sassy career-girl protagonist. Oh, how silly, she thinks she can have a career AND a boyfriend. Well, little Missy, this is Hollywood, and we all know that sassafrass don't fly out here. What will she do? Which will she choose? What has happened to Harrison Ford's dignity? Why was this produced by ... J.J. Abrams? Really? Huh.

REALITY: There's a scene early on in Morning Glory where distinguished news anchor Mike Pomeroy (Harrison Ford) shows up to accept his new position as the co-host of failing morning news show "Daybreak." Anxious not to show his desperation, he lists off the highlights of his long and storied career to new Executive Producer Becky Fuller (Rachel McAdams). When he is done naming his numerous awards and accomplishments, Becky simply whispers "You are here for the money." Ordinarily, I'd be using this line to make a joke about Ford's career and his reasons for appearing in this film. However, the truth is, I know why Harrison Ford accepted this role: He saw the makings of a good movie. And a little bit for the money.

For the most part, Morning Glory is a pretty by-the-book comedy in the vein of The Devil Wears Prada. Becky loses her job, gets a new job, is overworked, has a crush, etc. This is normally where I explain the plot, but you already know it. Even if you've never heard of the movie, by now you know the ending. What sets the film apart from its ilk is the near-constant refusal to be dragged into romantic-comedy tropes. Early on in the film, Becky is speaking on the phone with one hand while riding a bike, and turning dangerously close to a lake. What a lesser film (probably starring Katherine Heigl) would have done -- what I braced myself for -- was send her into the water, especially if she were wearing white. Ha ha. But instead, Becky rides on past. End of scene. Why? Because no human being with functioning motor skills would have fallen in that friggin' lake, and in this film at least, people act like human beings.

One of the highlights in this film is Becky's relationships with everyone around her. With the exception of a few friends who disappear after the first scene, Becky has no real support system. She's shown as naive to the point of annoying, and everyone knows it, including her boss (Jeff Goldblum), her old anchor (Diane Keaton) and the heralded journalist (Ford) who Becky calls upon to save the show. The film goes out of its way to mock her during what are typically thought of as big rallying speeches, and it's refreshing to see a film take this approach to its hero. Because of this realism, Becky's determination is actually more impressive, and it's easier to want her to succeed. 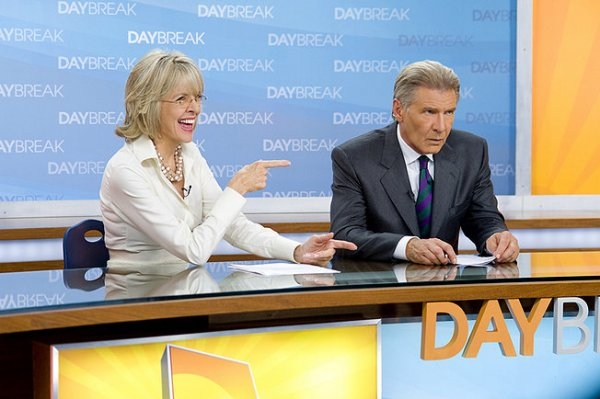 Diane and Harrison, dedicated as they were, actually hosted a morning news show for forty years in preparation for these roles.

Goldblum and Ford in particular stand out as brilliantly cynical sounding boards to McAdams' idealism. When Mike throws a temper tantrum over having to say the word "fluffy" on air, or refers to Becky's boyfriend Adam (Patrick "I'm awesome" Wilson) as "Senor Dipshit," he does so with such a distinguished grizzle, you become more convinced that he really just didn't want to do Indy 4 in the first place. This is how Harrison Ford should be, and McAdams is a perfect youthful foil for his bickering. Even more impressive is the film's handling of the career vs relationship dilemma between Adam and Becky. They don't. It's almost a non-issue, except for one small fight. There's no will-she-won't-she melodrama, and when a misunderstanding happens early on in the relationship, the two characters talk about it and directly explain their feelings in the very next scene. I was taken aback by this, because it appeared that characters in a movie were behaving like adults, and that can't be right.

It seems unfair to even call Morning Glory a romantic comedy, because the romance isn't at the forefront of the movie. Whereas most films would focus mainly on Becky and Adam while relegating Mike to a one-note cantankerous old man side character, this one takes the opposite approach. The movie is about a father-daughter dynamic between Mike and Becky, and Becky just happens to gain a boyfriend along the way. It's a side note, which actually makes it feel more natural. Adam is a supporting character who actually supports the story. However, romantic-comedy is the description we have to use for it, because the film is clearly trying to be one, but somehow failing in the best way possible (which is about all Harrison Ford can hope for these days.)

The smart script is remarkably self-aware, and that makes it incredibly strong. At times it feels like it knows that it's a rom-com so hard, it almost seems like parody. It's okay that everything works out impossibly well, because things work out in these movies. It's okay that 50 Cent shows up out of nowhere and raps with Diane Keaton, making them both look like total tools, because celebrities who show up on morning shows always look like complete tools. It's okay that there is a bunch of weird shit going on in the background that has nothing to do with the plot (including a cameo by the Blue Man Group) because the film knows that it was made by JJ Abrams.

Every time the film slows down into cliche, which it certainly does by the third act, something original happens to subvert it. When Becky and Mike have their breakthrough opening-up moment, Becky thinks, because she's seen this kind of film before, that everything is going to be different now. She then learns that if someone is a dick before one of those moments, they're usually a dick after, and it's brilliant. Even the grand sweeping "Please stay" finale is done differently, more subtly and filled with character growth than most films.

I prepared myself to hate Morning Glory. I even came up with a fantastic title for this article that will now never get used. ("I am Bored as Hell, and I'm Probably Going to Take it Some More," if you were wondering.) However, the film, director Roger Michell and producer JJ Abrams left me pleasantly surprised. This is familiar territory, and there are flaws, but they're flaws characteristic of the genre. (Why don't romantic comedies have composers? Why does the the soundtrack always seem like someone flipped through the director's iPod and said "Eh, that'll work?") Most of all, I'm just glad to see a genuinely funny movie with people who don't act like complete retards.

MINORITY REPORT: I once made an appearance on an early morning edu-tainment special, being interviewed about my harrowing time spent trapped in a sealed mineshaft. I'm afraid the cameras made me somewhat nervous and jumpy and many people who saw the broadcast said that I showed signs of "demonic possession." This is silly, of course. We all know I shook that particular bug back in the great war against the bloody Scottish barbarians. -Montague "Legally Sane" Smythe