Jackass 3-D is finally here! Rejoice, all you fans of people deliberately hurting themselves in a format that had its day a decade ago, for we serious and pretentious film critics have decided not to review it. Face it; it's not a real film. Instead, Joseph "Jay Dub" Wade took in and thoroughly enjoyed Red, despite its lack of PortaPotty catapults.

The Reds are Coming

EXPECTATIONS: 2010 is now officially the Year of Movies Based on Comic Books Nobody Has Ever Read. With Kick-Ass, The Losers, Jonah Hex, and Scott Pilgrim already behind us, it seems like Hollywood has settled into a groove of producing halfway-interesting movies with well-rounded casts that practically nobody in the world actually wants to see. Enter Red, yet another movie based on a comic, only this time we've got a cast full of Oscar winners and A-listers, John Malkovich acting like a crazy person John Malkovich, and lots of gunplay and explosions. Can Red overcome the 2010 Comic Movie Curse? 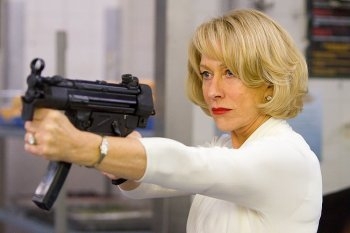 Dame Helen Mirren melts down Oscars to make her bullets.Red (technically "R.E.D.", Retired and Extremely Dangerous) is the kind of action movie they used to make back when your dad still went to the movies. Back when John McClane was still cool and it didn't matter how the hero killed all the villain's henchmen, so long as he actually did. Characters could explode in the first act only to come back in the third act and explode again. The villain's plan could be as simple as "I want him dead, just 'cause," but he'd have to make up an elaborate explanation just for shits and giggles. That's what Red is. It's essentially a better, more entertaining version of The Losers. Then again, what isn't?

As the movie opens, retired CIA operative Frank Moses (Bruce Willis) pretty handily escapes being murdered by a professional hit squad. After rescuing his pension officer, Sarah (Mary-Louise Parker), from a similar fate, Frank rounds up his old team in order to stop whoever wants him dead. Among Frank's former colleagues are fellow CIA men Joe (Morgan Freeman) and Marv (John Malkovich) and former MI6 agent Victoria (Helen Mirren). Karl Urban plays the CIA operative out to get Frank, Richard Dreyfuss plays the bad guy (he actually says "I'm the bad guy!" three or four times), and Ernest Borgnine even shows up briefly as a CIA file clerk, though I suspect he'd been living on the set long before the cameras started rolling. 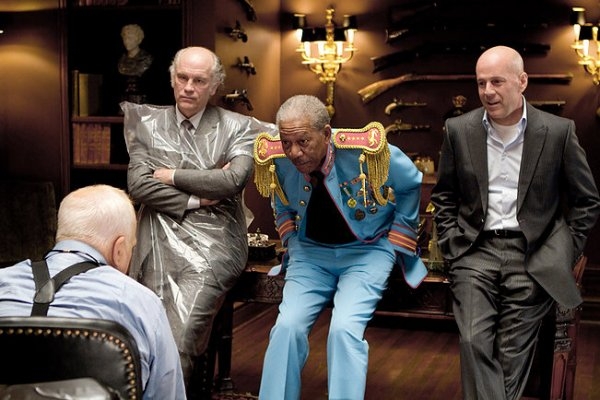 I'd explain the plot more except ... well ... that's pretty much all there is. Someone wants Bruce Willis dead; Bruce Willis wants to know who; Bruce Willis and a bunch of other old people shoot a hell of a lot of younger people. There is no labyrinthine plot full of crosses and double-crosses, there are no evil globe-spanning conspiracies and there certainly isn't any mind-shattering special effects nonsense. Red is just a simple movie about some of our favorite veteran actors and actresses jabbing young whippersnappers in the throat and firing lots and lots of guns. If that doesn't sound like your kind of action movie, the line for Transformers 3 forms to the left. I'll be around to punch you all in the stomach later.

You may be tempted to say, "Wait a minute, isn't The Expendables still in theaters?" Yes, yes it is. The difference here is that the cast of Red can actually act. Some of them have even won awards for it. Granted, most of them probably took the job for the paycheck in between prestigious Oscar-bait about world leaders who never did anything, but still. Whoever dreamt up the image of Helen Mirren laying down cover fire while Bruce Willis flees the scene in the most obvious spy costume imaginable deserves a raise. Most of the fun of this movie comes in watching such well-respected actors destroying everything in their paths. Who needs a complex spy thriller, anyway? 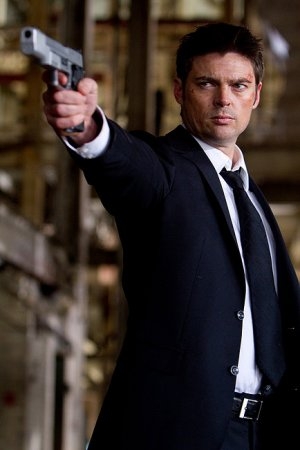 "Don't make fun of my name!"And while it's certainly a hoot watching Helen Mirren fire heavy artillery and seeing Bruce Willis beat the shit out of Karl "I Picked My Last Name Out of A Hat" Urban, the number one reason to see Red has to be John Malkovich. Malkovich is already the number one reason to see any movie, but here he gets to play a special brand of crazy usually only reserved for Nicolas Cage and homeless people riding public transportation. In fact, those two things are probably the best way to describe his character. As Marv, Malkovich plays the wacky comic relief character that is typically the one commenting on whatever is about to go down. Usually, a movie will have this character say something like "I have a bad feeling about this ..." only to suddenly have something bad happen a few minutes later.

"Ha ha! Boy, was he right!" says the viewer, getting played like a fiddle. "What a coincidence!"

Marv has four or five moments like this in the movie, only instead of saying something is vaguely wrong, he'll give a detailed report of what's going to happen five minutes later. "That cop is watching us. I saw him earlier, the number on his badge doesn't check out," Marv would say. His teammates ignore him, and then a few minutes later, lo and behold, that cop is attacking them with an AK-47 and three other left-field weapon choices. Then, just to show that he's good for more than making the audience giggle, Marv dispatches the cop with a single, well-timed shot. The movie conveniently forgets that Marv can do either of these things during the climax, but it's fun while it lasts.

Now that I think about it, Red is a really difficult movie to try and describe. On the one hand, you have the "retired CIA agents reunite for one last mission" plot, which is what all the ads and trailers are advertising, but there's really only about thirty minutes of plot devoted to this. The rest of the film is devoted to either a tentative romance between Frank and Sarah or a road trip to "get the band back together." At the start of the movie we see Frank and Sarah flirting over the phone, and after the initial assault on Frank's house, he drives out to meet up with her, which then leads to our bizarre little road trip movie. I say "bizarre," because instead of seeing anyone driving or flying anywhere, we get a giant postcard saying "Greetings From Chicago!" or wherever our characters are now.

The romantic subplot is well written enough for the movie it's in, and any other movie (read: a more serious one) would attempt to turn this romantic angle into some kind of deconstruction or satire on romantic angles in action movies. It's kind of what that whole Killers movie was supposed to be about, and we all know how that wound up.

Despite its Oscar-worthy cast and excellent action setpieces, Red isn't going to win any awards. And if the box office returns from this year's other action movies based on comics are to be believed, this one will be lucky to break even. That's a damn shame, because Red is a lot more fun than it deserves to be. The jokes are funny, the action is watchable, Bruce Willis is still awesome. What more do you want out of a movie? Turds flying around in 3D?

Okay, fine. You Jackass fans get in line behind the Transformers fans. The punching is about to begin. 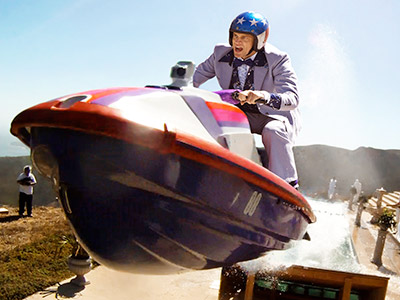